More than three dozen states and an assortment of lawmakers and third parties filed a flurry of briefs on Dec. 10, picking sides in a legal battle over whether the Supreme Court should consider a lawsuit brought by Texas that alleges that Pennsylvania, Georgia, Michigan, and Wisconsin conducted their elections in violation of the U.S. Constitution.

Twenty Democratic attorneys general filed a brief on Dec. 10 in support of the defendants. A day earlier, 18 Republican attorney generals backed the Lone Star State. Republican Ohio Attorney General Dave Yost backed neither party and opposed the relief sought by Texas, namely that the Supreme Court should toss out the election results in the four contested states and order their state legislatures to pick electors in accordance with the Constitution.

The four defendant states and the 20 Democratic AGs constitute all but one of the Democratic attorneys general in the United States. Iowa Attorney General Tom Miller was the only Democrat who didn’t join the lawsuit as of the evening of Dec. 10.

The governor of Alaska said his state’s attorney general didn’t have enough time to review the lawsuit before the deadline to join the case.

“I’ll be the first to admit that I was disappointed that we didn’t have enough time to thoroughly review the details. Had this not been the case, we may have come to a different decision,” Gov. Mike Dunleavy said in a statement emailed to The Epoch Times. “My understanding is that the Supreme Court will make a quick decision prior to December 14. Depending on the outcome, Alaska will respond accordingly.”

“As is sometimes the case, the legally correct decision may not be the politically convenient decision,” he said in a statement. “This decision is necessary to protect Idaho’s sovereignty. As Attorney General, I have significant concerns about supporting a legal argument that could result in other states litigating against legal decisions made by Idaho’s legislature and governor.”

Texas sued the four battleground states on Dec. 8, alleging that officials there conducted the 2020 general election in violation of the Constitution. The lawsuit alleges that the defendant states illegally altered election laws, causing a flood of mail-in votes after removing ballot integrity measures.

The resulting irregularities put the ultimate outcome of the election in doubt, the Lone Star State claims.

The Trump campaign and the states of Missouri, Arkansas, Louisiana, Mississippi, South Carolina, and Utah filed formal motions to intervene in the lawsuit on behalf of Texas. None of the Democratic attorneys general have yet taken the same step.

While opposing the relief sought by Texas, Ohio’s Yost argued that the court should still resolve the fundamental question posed by the Lone Star State: Does the Constitution permit state courts and state officials to alter election rules enacted by their legislatures?

“The people need an answer, too,” Yost said. “Until they get one, elections will continue to be plagued by doubts regarding whether the President was chosen in the constitutionally prescribed manner.”

The Democratic attorneys general argued that the Electors Clause of the Constitution, which Texas claims has been violated, allows no space to second-guess decisions made by state courts and legislatures. The Democrats claimed that the election rule changes enacted in 2020 were common-sense measures to stem the spread of the CCP (Chinese Communist Party) virus, commonly known as the novel coronavirus, and that the changes didn’t introduce widespread fraud. 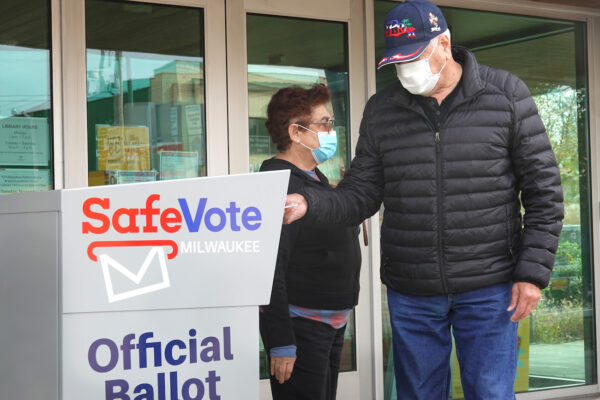 Residents drop mail-in ballots in a ballot box outside of the Tippecanoe branch library in Milwaukee, on Oct. 20, 2020. (Scott Olson/Getty Images)

The four defendant states each filed separate briefs in opposition to Texas.

“Texas seeks to invalidate elections in four states for yielding results with which it disagrees. Its request for this Court to exercise its original jurisdiction and then anoint Texas’ preferred candidate for President is legally indefensible and is an affront to principles of constitutional democracy,” the Pennsylvania brief states (pdf).

In addition to the states, a battery of briefs from other parties poured in around the time of the court’s 3 p.m. deadline. A group of 106 Republican House members backed Texas.

“The legislature of every Defendant state had established detailed rules by which that state’s appointment of presidential electors should have been conducted. However, in the months before the 2020 election, those rules were deliberately changed by both state and non-state actors,” the Republican brief (pdf) states.

“The clear authority of those state legislatures to determine the rules for appointing electors was usurped at various times by governors, secretaries of state, election officials, state courts, federal courts, and private parties.”

Legacy media outlets have declared former Vice President Joe Biden the winner in Pennsylvania, Georgia, Michigan, and Wisconsin. President Donald Trump hasn’t conceded the race and continues to pursue legal challenges in the four defendant states, as well as in Arizona and Nevada.