The ACLU on Saturday rewrote a quote from the late Justice Ruth Bader Ginsburg regarding abortion by removing feminine pronouns.

Ginsburg’s unedited remarks — made in 1993 before the Senate Judiciary Committee during her confirmation hearings to the Supreme Court — were as follows: “The decision whether or not to bear a child is central to a woman’s life, to her well-being and dignity. It is a decision she must make for herself. When Government controls that decision for her, she is being treated as less than a fully adult human responsible for her own choices” [emphasis added].

The ACLU edited Ginsburg’s quote both with changes to the late justice’s use of pronouns and the excision of a sentence referring to women’s decision-making process in the context of pregnancy and abortion.

The leftist operation wrote: “The decision whether or not to bear a child is central to a [person’s] life, to [their] well-being a dignity. … When the government controls that decision for [people], [they] are being treated as less than a fully adult human responsible for [their] own choices” [emphasis added]:

With Justice Ruth Bader Ginsburg’s death, we lost a champion for abortion and gender equality. And on the anniversary of her death, the fight to protect abortion access is more urgent than ever. pic.twitter.com/vIKadIHouN

In a subsequent tweet, the ACLU omitted any mention of women, including a reference to “a patient getting an abortion.”

The ACLU’s decision to remove feminine pronouns in the context of pregnancy and abortion complies with a neo-Marxist rejection of sexual dimorphism as a biological feature of humanity. Assorted Democrats and the broader left frame sex as a social construct subject to change and choice where men can decide to be women and vice versa. 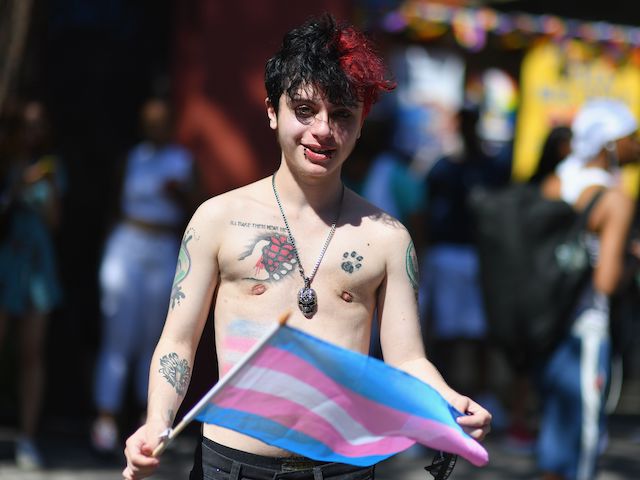 Deniers of humanity’s sexual dichotomy frequently describe their use of the above-mentioned terms as a “gender-neutral” approach to language while incorrectly framing “gender” and “sex” as interchangeable synonyms.

Various Democrats and left-wing political and news media figures have attempted to popularize “birthing person” as a neologism to escape using the word “woman.” Others have similarly used the terms “pregnant person” or “pregnant people” in the same vein.

Dr. Rochelle Walensky, director of the Centers for Disease Control and Prevention (CDC), used the terms “pregnant persons” and “pregnant people” in April.

So use these new emoji! Or don’t! It’s up to you! They’ll be on your devices soon either way!https://t.co/VhuildumWN

“Not all who give birth identify as ‘women’ or ‘girls,’” declared a Harvard Medical School department in 2020 while using the term “birthing people.”

In 2021, the ACLU published commentary calling for a “gender-neutral” option on passports in pursuit of what was described as “trans and nonbinary equity.”