Arizona GOP Chair: ‘All on the Shoulders of Vice President Mike Pence’ in Elector Fight

Arizona GOP Chairwoman Kelli Ward, a co-plaintiff in a lawsuit against Vice President Mike Pence, described the suit as a “friendly” one.

In an update on Tuesday, Ward attempted to clear any misconceptions about why the lawsuit was being filed. “We love Vice President Mike Pence, we love him,” she said, adding that it is a “friendly lawsuit.”

Earlier this week, Rep. Louie Gohmert (R-Texas) filed a lawsuit in a federal court in a bid to grant Pence the exclusive authority to decide what Electoral College votes to count during the Jan. 6 Joint Session of Congress. All 11 of Arizona’s Republican electors joined the lawsuit, along with other Republicans.

Pence’s office has not responded to a request for comment.

“What we all want here is election integrity,” including Pence, Ward remarked. What the lawsuit does, according to Ward, is arguing that the “Constitution takes precedent over statute.”

“We can’t and could not allow fraudulently certified electors to Washington, D.C. to be counted in a presidential election,” Ward said, adding that the vice president has the duty to count “legally cast electoral votes.” Pence could say that none of the electoral votes—either the ones cast by Republicans to preserve lawsuits or ones cast by Democrats that were certified by governors in contested states—should be counted.

Ward said that the lawsuit is further attempting to affirm that “it’s all on the shoulders of Vice President Mike Pence,” and that it is an attempt to assist him.

The lawsuit (pdf) that was filed earlier this week noted that Pence has a role in the upcoming Jan. 6, 2021, joint session of Congress to count all 50 states’ Electoral College votes, and it is asking a federal judge to strike down the 1887 Electoral Count Act and to grant Pence the authority to overturn the election results in favor of President Donald Trump.

Gohmert’s lawsuit is claiming that any action taken by Pence on Jan. 6 to certify the Electoral College results to secure a win for Joe Biden will be fraudulent. He’s also asking Judge Jeremy Kernodle, a Trump appointee, to determine that Pence is authorized to pick GOP electors who cast votes for Trump during the Joint Session of Congress. 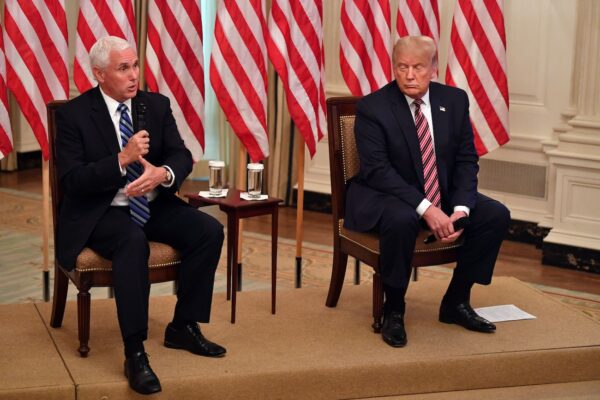 Vice President Mike Pence and President Donald Trump attend the “Getting America’s Children Safely Back to School” event in the State Room of the White House in Washington on Aug. 12, 2020. (Nicholas Kamm/AFP via Getty Images)

According to the Constitution’s provision on the counting, “The President of the Senate shall, in the Presence of the Senate and House of Representatives, open all the Certificates, and the Votes shall then be counted.”

Gohmert, in a statement, said he’s filing the lawsuit to prevent the United States’ further decline into a “banana republic,” referring to claims made by Trump and his legal team that fraud was rampant in key states during the Nov. 3 election.

“The 2020 presidential election was one we’d expect to see in a banana republic, not the United States of America,” Gohmert said on Monday. “In fact, the rampant fraud and unconstitutional actions that took place were so egregious that seven contested states—Arizona, Georgia, Michigan, New Mexico, Nevada, Pennsylvania, and Wisconsin—all sent dueling slates of electors to Congress. This puts Vice President Mike Pence in a position where some argue he has to choose between morality and the law. That is not the case.”

Some legal experts have weighed in on Twitter, saying the lawsuit has a slim chance of going through.

“The idea that the vice president has sole authority to determine whether or not to count electoral votes submitted by a state, or which of competing submissions to count, is inconsistent with a proper understanding of the Constitution,” said Edward Foley, a law professor at the Ohio State University, reported The Hill.

Foley said that he isn’t “at all sure that the court will get to the merits of this lawsuit, given questions about the plaintiffs’ standing to bring this kind of claim, as well as other procedural obstacles.”

However, Foley himself wrote in a 2019 report that it’s not clear what the president of the Senate, which is Pence, should do if two conflicting slates of electors are provided.

“As the distinguished jurist Joseph Story observed early in the 19th century, this crucial constitutional language in the 12th Amendment appears to have been written without imagining that it might ever be possible for this sort of dispute to arise,” he said.

Nolte: Arizona Department of Education Teaches that White Babies and Toddlers Are Racist