“At this very moment, while the hand counting of ballots continue, there’s a lot happening behind the scenes, and legal action is imminent,” Ward said. “Arizona Secretary of State and political hack Katie Hobbes, who is campaigning for governor, has made her office – an official non partisan office of the people of Arizona – into ground zero for anti-audit forces. She’s using taxpayer dollars to do the Democrats dirty work: To launch lawsuits, and she’s even asked for unconstitutional federal intervention, federal monitors to enter Arizona.”

“Beyond the actual recounting of each and every ballot, there is new information coming to light each and every day, as to how poorly the election in November was supervised in Maricopa County and in Arizona,” Ward continued. “Election officials say they didn’t have access to passwords that are critical, critical equipment, but outside vendors like Dominion did. Routers weren’t secure and may have been used to allow access to a network of county offices. And now Maricopa County recorder Stephen Richer has revealed in a letter to voters that he learned, prior to his term, a breach of voter identification information occurred last election cycle and is now being investigated by law enforcement.”

Ward added, “We all know, we know this old adage that where’s there’s smoke there’s fire. Well, though our efforts, and through this audit, which has gained national attention, the smoke is finally clearing.”

On November 5, 2020, the FBI raided the home of an IT expert named Elliot Kerwin after a cyberattack that resulted in the theft of Maricopa County voter data was reported by the county Recorder’s office. According to Forbes, the agents confiscated “eight hard drives, three computers and a bag of USB sticks. ”

“Analysis by the Maricopa County Recorder’s Office IT Security indicates an unauthorized individual gathered publicly accessible voter information from our website,” a spokesperson said at the time. “Additional security controls were put in place to mitigate against this activity occurring in the future. The Maricopa County Recorder’s Office has reported this to proper authorities and law enforcement personnel, and there is an ongoing investigation by the FBI at this time. The FBI informed our office today they served a warrant.”

While Joe Biden was initially awarded the state of Arizona in the 2020 presidential election, recent reports have indicated that the decision could potentially be reversed, given a recent windfall of damning evidence that election critics claim proves the Maricopa County vote tabulation process was compromised.

13 May at 4:32 pm
Arizona
“You Can't Do That To People”: Virginia Gas Station Charges Almost $7 Per Gallon
U. of Michigan Student Government Accuses Israel of 'Ethnic Cleansing' 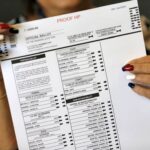