The head of the Arizona Republican Party has filed a petition for early inspection of mail-in ballot envelopes and signatures, ahead of an anticipated legal challenge over the certified state results.

The court petition, filed yesterday against the 11 Arizona Democrat presidential electors, also seeks inspection of duplicate ballots with their originals in Maricopa County.

“A formal legal elections challenge is expected to be filed soon alleging that the process used to validate ballots returned by mail was legally insufficient,” said a statement by the Arizona Republican Party. “The critical process of verifying a signature determines whether a vote is counted.”

Direct legal challenges to the statewide canvass cannot be filed until the canvass is completed and the state is certified, most likely on Nov. 30, according to the suit.

“Given the number of ballot envelopes that will potentially need to be inspected, the lawsuit seeks to begin the process of discovery as soon as possible,” said the GOP statement in reference to papers filed on Nov. 24.

Mailed ballots are the dominant voting method in Arizona, with 3,490, 271 ballots mailed in the course of this year’s election.

The papers also allege that some suburbs in Maricopa County had an unusually high number of duplicated ballots. They also allege that the results were “strongly inconsistent” with voter registration data in terms of party affiliation and historical voting patterns. 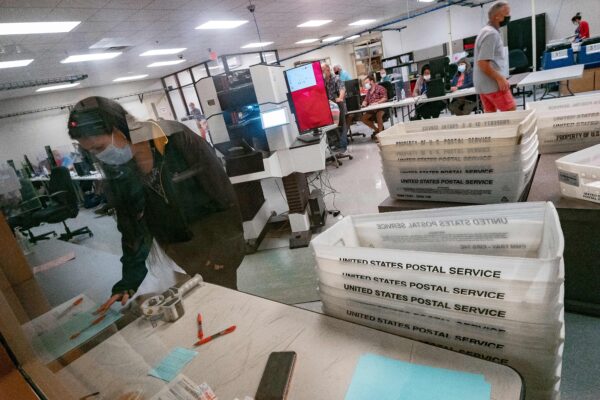 Duplicate ballots are used when the original is too damaged or is filled out in such a way that it cannot be run through a tabulator.

The Arizona Republican GOP say that they have received signed statements from numerous election observers testifying that they were kept from performing meaningful verification of mail-in ballots.

According to the Nov. 24 legal papers, duplicate ballots in Maricopa County were created by bipartisan teams of one Democrat and one Republican, who filled in an “electronic” ballot, which then was sent offsite to a printing company.

The lawsuit, however, objects to what it says was a lack of official observers at the offsite printing company. It also claims that the software used to fill out the electronic ballot was inaccurate and “often flipped the vote.”

The Biden campaign in Arizona declined to comment on the lawsuit, AP reported.

Arizona Gov. Doug Ducey said on Nov. 19 that he’ll accept the outcome of the presidential race when all court cases have been settled. The Trump campaign hinted during a press conference that day that it’s considering filing another lawsuit in the state.

All Arizona counties have now certified their results, which show Joe Biden as the winner. The final state canvass is scheduled to occur on Nov. 30, when the secretary of state and governor of Arizona will make the final certification for Arizona’s 11 electoral votes.

Arizona’s Kelly Townsend Calls for Michelle Ugenti-Rita, Who Got Booed Off Stage, To Resign: ‘You Have Violated Your Oath’