(Headline USA) Voting machines from Arizona‘s most populous county should not be used in the future after state Senate Republicans forced officials to give them access for an audit of 2020 election results, the state’s top elections official said Thursday.

Secretary of State Katie Hobbs, a Democrat, said in a letter that Maricopa County lost control of the machines after they were handed over and doesn’t know what was done to them.

Senate Republicans issued a subpoena demanding the county turn over vote-tabulation equipment, along with ballots and a variety of other records for the audit of the county’s 2020 vote count.

Former President Donald Trump and his supporters, as well as independent election experts and forensic analysts, have said that his loss was marred by fraud.

The county hired several firms to conduct the audit, led by Cyber Ninjas, a Florida-based firm.

The audit will not change the outcome of the election, but many Trump supporters hope it will lead to similar reviews in other battleground states and turn up evidence that President Joe Biden’s victory was illegitimate.

“I have grave concerns regarding the security and integrity of these machines,” Hobbs wrote to the Maricopa County Board of Supervisors, which is controlled 4-1 by Republicans.

She urged the county not to use the machines any longer and threatened to initiate a process that could lead to their decertification.

The county spent $6.1 million to lease the machines from Dominion Voting Systems in a three-year contract that expires before the 2022 election. There are three one-year renewal options.

“There are real concerns about what the unaccredited ‘auditors’ have done to Maricopa County’s voting equipment, and whether the machines remain useable for future elections,” Dominion said in a statement.

It’s clear that the secure chain of custody had been broken, the statement added.

“We will not use any of the returned tabulation equipment unless the county, state and vendor are confident that there is no malicious hardware or software installed on the devices,” Megan Gilbertson, a spokeswoman for the county’s Elections Department, said in an email. “The voters of Maricopa County can rest assured that we will not use any equipment — ever — that could pose a risk to free and fair elections.”

The county is using new equipment for local elections in 2021, she said. The auditors have returned large central count tabulators to the county but retain 385 precinct-based tabulators that count ballots cast at vote centers.

A spokesman for the Board of Supervisors, Fields Moseley, said county lawyers are reviewing Hobbs’s letter to advise board members before they decide how to respond.

Meanwhile, a data forensics consultant working on the audit is doubling down on his claim that an election database was deleted.

A statement posted to the audit’s Twitter account and attributed to Ben Cotton, the founder of audit contractor CyFIR, says his comments made to the state Senate on Tuesday were misinterpreted to suggest nothing was deleted.

He told senators that all data had been recovered.

“To confirm: the ‘Databases’ directory on the EMS Primary Server WAS deleted containing the voting databases. I was able to recover the deleted databases through forensic data recovery processes,” the statement said. “We are performing data continuity checks to ensure that the recovered databases are usable.”

The allegation of deleted data was first raised last week by the auditors and amplified by Trump.

Maricopa County officials responded with fury, denying they deleted any data, which would be illegal, and accusing the auditors of incompetence in not being able to locate the data.

On Monday they released a detailed explanation saying auditors didn’t know how the county’s databases were configured, a problem they said would create the error messages auditors received.

Cotton described for senators on Tuesday how he recovered the data, a process that aligned with the county’s explanation, saying everything was accounted for.

Gilbertson of the county Elections Department said the agency stands by its analysis and the directory was never deleted. 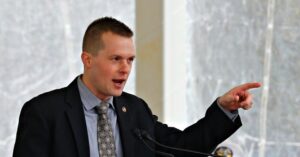