WASHINGTON—As credible allegations of election malfeasance continue to emerge, the majority of Republican politicians remain on the sidelines, simply saying that the president deserves his day in court.

On the federal level, among the most outspoken are, predictably, members of the House Freedom Caucus, many of whom hail from one of the six contested states—Arizona, Nevada, Wisconsin, Michigan, Pennsylvania, and Georgia.

A dozen members of the Freedom Caucus held a press conference on Dec. 3 to urge Attorney General Bill Barr to investigate the claims of fraud, saying that a lack of clean elections and trust in the system will spell the end of the republic.

There are 196 Republican representatives in the House, and a scroll through the Twitter accounts of many found they were united last week in protesting against efforts to pass legislation on marijuana legalization instead of relief for small businesses.

But there were barely any posts that address election issues, amplify the election allegations made, or comment on the recent hearings held in the contested states—suggesting they’re avoiding wading in.

The representatives’ efforts, or lack thereof, don’t seem to match voter sentiment, considering that more than 70 percent of Republican voters are saying they don’t trust that the election was free and fair, according to a POLITICO/Morning Consult poll published on Nov. 9.

In Georgia, more than 90 percent of Trump voters don’t trust the results of the presidential election, according to an online survey of more than 1,700 subscribers to the The Epoch Times on Dec. 7.

At a Trump rally in Valdosta, Georgia, on Dec. 5, the crowd broke out chanting “Fight for Trump! Fight for Trump!” as the two senators up for reelection, Kelly Loeffler and David Perdue, took the stage.

Meanwhile, Trump has been urging Republicans to “get tough” as he continues to raise awareness of affidavits by election workers and poll watchers that allege election fraud, as well as statistical anomalies and potential legal aberrations.

He has named and shamed governors and politicians who he says aren’t doing enough to investigate election issues, or are certifying results that he alleges are still fraudulent.

On Dec. 5, Trump said the Democratic Party couldn’t be happier with both Arizona Gov. Doug Ducey and Georgia Gov. Brian Kemp, both Republicans.

“They fight harder against us than do the Radical Left Dems. If they were with us, we would have already won both Arizona and Georgia,” Trump wrote on Twitter. 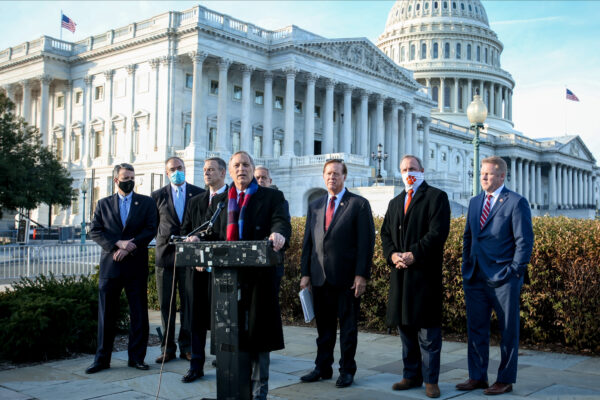 Rep. Andy Biggs (R–Ariz.) speaks alongside members of the House Freedom Caucus during a press conference outside the Capitol building in Washington on Dec. 3, 2020. (Charlotte Cuthbertson/The Epoch Times)

“One is the party of the rank and file—which is clearly behind Trump, as 95 percent voted for him. And the other is the old establishment Party, which is partly Never Trumpers and partly just establishment bores,” Simon said.

But, Simon warned, the politicians should “wake up and listen to their voters.”

Lee Smith, author of “The Permanent Coup” and contributor to The Epoch Times, said many Republicans are scared “because of what the Democrats have done in partnership with the intelligence services and the press” over the last four years.

“They’re scary things,” Smith said, referring to the last four years, which included disproven allegations of Russia-collusion, impeachment against the president, and campaigns against politicians such as Rep. Devin Nunes (R–Calif.) for denouncing the unmasking of Trump transition team members, as well as the illegal spying conducted as part of the FBI’s Crossfire Hurricane investigation.

“People are also disoriented,” Smith said. “It’s very hard to recognize these different things. It’s the United States—is it really possible that the intelligence services are working with the media to prosecute campaigns of political warfare? Well, sure, seems pretty far out. But that’s exactly what’s happened.”

Smith said Trump’s base is clear on what’s happening and is fighting back, but not enough of those on Capitol Hill are joining them. 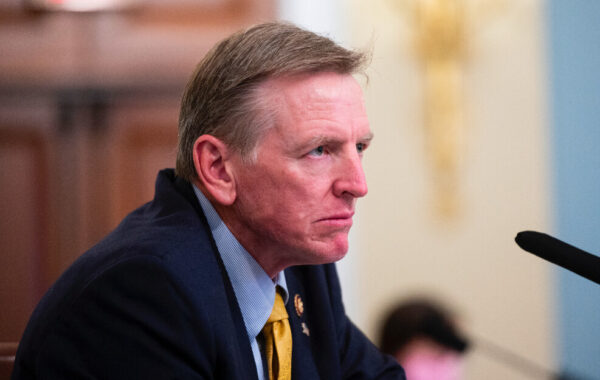 Gosar said more Republican politicians need to stand up despite the possibility of retaliation.

“It’s going to come if it’s going to come,” Gosar told The Epoch Times on Dec. 8. “And I wouldn’t change anything, because we’re a nation of laws, and we have to have oversight.

“I challenge everybody: If that’s the America that we live in, where you have to fear retaliation for doing the right thing, then this is a banana republic, not a constitutional republic. And we’re further down the line of communism.”

Gosar said politicians need to answer to the people, and those in the contested states should be demanding oversight.

He has lodged Freedom of Information requests with the Arizona secretary of state, the governor, the attorney general, and the Board of Supervisors in Maricopa County, to discover whether they did their due diligence.

“It’s hard for me to believe—maybe I’m wrong—that the Board of Supervisors did their due diligence with the [voting machine] software,” Gosar said.

As long as the election issues remain unresolved, Americans are finding out that their vote doesn’t really count, Gosar said.

“They get it, they’re not stupid. We won’t have a free and fair election ever again,” he said.

The Epoch Times reached out to seven other Congress members, but none were available for an interview.

The Department of Justice didn’t respond to multiple requests for comment on election-related investigations.