At least five people are dead and 40 more are injured after a red SUV sped through the crowd and performers at a Christmas parade in Waukesha, Wis., on Sunday afternoon.

Graphic videos of the event show the vehicle running over marchers, dancers, and other performers as well as parade attendees.

A car just plowed through a crowd at a Christmas parade in Waukesha, WI.

As many as 30 people people are reportedly injured.

Update at 7:30
This is video from City’s parade live stream on Facebook. pic.twitter.com/EPWFkpElLV

Cheerleaders and dancers were performing during the Christmas parade in Waukesha when a Ford Escape tore through it.

Officials with the Waukesha Fire Department said on Sunday that they transported at least 11 adults and 12 pediatric patients to local hospitals.

“There were some fatalities:” Waukesha fire department officials say they have transported a total of 11 adults and 12 pediatric patients to area hospitals. pic.twitter.com/QzXBGlQAMF

Early social media reports claimed that shots were possibly fired from the vehicle that plowed through the crowded parade route but law enforcement authorities confirmed on Sunday that an officer at the parade discharged his weapon at the SUV in an attempt to slow or stop the harmful driving.

-Vehicle struck more than 20 people, some of them children
-There are fatalities
-Person of interest in custody; investigation fluid
-Officer discharged weapon at suspect’s vehicle pic.twitter.com/MSCSmyMsdD

Waukesha city officials released the death toll on Sunday night with the caveat that the numbers might grow as more information surfaces but did not specify who had died.

At this time, we can confirm that 5 people are deceased and over 40 are injured. However, these numbers may change as we collect additional information. Many people have self-transported to area hospitals. The Police Department has the person of interest in custody.

The Milwaukee Dancing Grannies, a group that performed in the parade, confirmed on Monday morning that multiple dancers died as a result of the tragedy.

“Those who died were extremely passionate Grannies. Their eyes gleamed…..joy of being a Grannie. They were the glue….held us together,” the group’s Facebook page stated.

Archdiocese of Milwaukee spokeswoman Sandra Peterson said that at least one Catholic priest, as well as multiple parishioners and Waukesha Catholic schoolchildren, were injured in the incident.

Footage of the aftermath shows dozens of people lying on the street surrounded by concerned and crying bystanders.

This is a video of the aftermath on the attack on the Christmas parade in Waukesha.

Roads around the area of the annual parade remained closed early Monday morning and local schools canceled classes for the day.

Roads around the Waukesha Parade Christmas route still closed this morning, more than 12 hour after a vehicle drove through people in the parade. We know this morning that at least 5 people have died. @tmj4 pic.twitter.com/GQ9cw2j77w

Waukesha Police Chief Dan Thompson confirmed on Sunday evening that officers had detained “a person of interest” but did not release additional details about the suspect or the “fluid” investigation. The red SUV used in the attack was also recovered.

While authorities did not officially name a suspect in press conferences, journalists and social media sleuths claimed to have determined that police, as stated on Waukesha police scanners, are further investigating Darrell Brooks, Jr., a Milwaukee man with a lengthy rap sheet who posted bond just a few days before the parade, as the potential suspect who drove the vehicle. NBC News reported that five law enforcement officials confirmed Brooks’ identity as the person in custody.

22 Nov at 10:02 am
Dead Voters
Wisconsin
Man Plows SUV Through Wisconsin Christmas Parade
Migrant Arrivals Around TRIPLE that of 2020, Majority of Voters Think Tories Are ‘Too Soft’ on Crisis 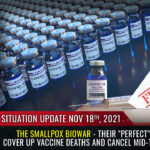 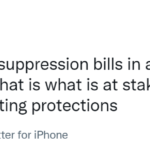 Why Does Michigan Still Have 25,000 Dead People On Its Voter Rolls?