Authored by Monica Showalter via AmericanThinker.com,

Migrants, and more important, the people who traffic and profit from migrants, are like the stock market: They’re forward-looking. They make decisions now based on what they see coming down the pike.

So surprise, surprise, the media’s crowning of Joe Biden president, along with many world leaders congratulating him and conducting their affairs of state with him, even as legal challenges are going on, has sent a message to Central America’s gangs and Mexico’s cartels, who control migrant smuggling routes to the U.S. It’s time to profit. It’s time to go. A new border surge has begun, in anticipation of a Biden open-borders presidency, which comes just as Democrat-run states and Biden himself are prescribing new COVID lockdowns.

According to the Washington Times’s Stephen Dinan:

Border Patrol agents are already seeing a Biden surge in illegal immigration at the southwest border, officials said Thursday, with the numbers surging 21% over the last month alone.

Acting Customs and Border Protection Commissioner Mark Morgan said worsening economic conditions south of the border are largely responsible for the uptick, but he also blamed “perceived and or anticipated shifts in policies” here in the U.S.

He said it’s particularly dangerous at a time when the coronavirus pandemic is taking a toll on CBP personnel. At least 1,300 CBP staffers are currently quarantined, 700 are currently COVID-positive and 15 have died of the virus.

Border Patrol agents and CBP officers snared about 69,000 unauthorized border crossers in October, up from about 58,000 in September.

Based on the number of COVID cases the Border Patrol is suffering, the unvetted migrants are bringing it in. 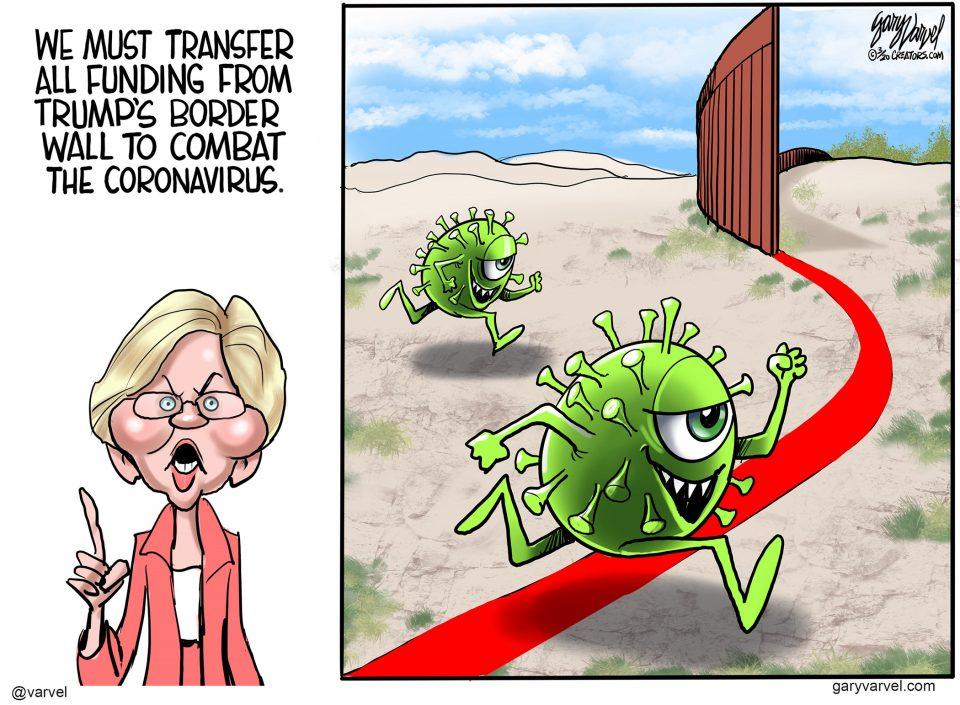 Which pretty well negates the Biden/Democrat effort to enforce more lockdowns — the closed schools, the targeted bars, gyms and restaurants, the limited travel, the cancelled Thanksgiving, and more.

So long as there is no lockdown at the border, and COVID is rolling in from unvetted migrants with enough money to pay smuggling syndicates, any efforts to contain COVID from the stateside is nonsense. Too bad about all the boarded-up businesses.

It highlights the fundamental contradition of Biden’s love for lockdowns, and support for open borders. You can have one or the other, but you can’t have both. Biden’s policy of open borders stands in stark contradiction to his vow to contain COVID. Which one do you think he’s more serious about?

Issues & Insights had an excellent item the other day on just what he says he intends:

Instead of expelling illegals to protect U.S. neighbors and families, the Biden-Sanders priority is to make sure that “health coverage is available to everyone for testing, treatment, medical services, rehabilitation, and that vaccines are available free of charge, regardless of immigration or economic status.”

Beyond this, Biden has promised to dismantle Trump policies that had been working to restrain the flow of illegals – sorry, “undocumented people” – across the border.

Wall construction will stop. Biden promises to implement a 100-day freeze on deportations “while his administration issues guidance narrowing who can be arrested by immigration agents,” according to one news account.

He plans to reinstate catch-and-release, which created a massive loophole for illegals who are set free into the country while their asylum claim is adjudicated, never to return for their final hearing.

Up until now, President Trump has used Title 42 of the U.S. Code to expel illegal border crossers because of COVID.

That’s one of the very regulations that a President Biden can end instantly with the stroke of a pen, according to this Time magazine analysis:

Biden could also end Trump’s “expulsions” that have taken place since March 2020 as COVID-19 has spread across the U.S. and most of the world.

DHS’s expulsion rule allows U.S. Customs and Border Protection (CBP) to immediately remove anyone who crosses the border without authorization to their last country of transit without traditional processing or a chance to have their claims heard in court because of the risks posed by COVID-19. Since the rule was adopted in March, U.S. Border Patrol has conducted more than 197,000 expulsions, according to CBP data.

And yes, these places the illegal migrants are coming from are seeing big surges in COVID as well as the terrible economic effects of local lost tourism, lost trade, lockdowns, and shutdowns, as noted in this Focus Economics report here. The migrants looking for economic opportunity in the U.S. will find the same lockdowns here, but with generous welfare and free medical care.

For Americans, there will just be more imported COVID.

Which, to get cynical, might just be what Democrats want — a permanent COVID that keeps the country locked down and themselves powerful, and millions and millions of COVID-filled migrants coming in to ensure that the lockdowns extend, ensuring that COVID is never contained.

You can bet Joe Biden won’t be addressing this fundamental contradiction of policy. He’s not serious about ending COVID. And in any case, he never answers questions. Not beyond what kind of ice cream he ordered. As long as migrants are surging the border, there will always be more waves of imported COVID.