Canadians Get to Vote Against Justin Trudeau's Migration Wave

Wages in Canada are almost flat, house prices are spiking, and the wealth gap is growing while Canada’s established political parties invite an accelerating flood of economic migrants.

But a Canadian politician has created a new political party to offer immigration reforms to Canadian voters in the impeding September 20 elections for 338 seats in parliament.

“The People’s Party of Canada is the only national political body that is for a lower level of immigration,” party founder Maxime Bernier told Breitbart News. “All the other parties are always for more and more,” he said with an accent that echoes his upbringing in Canada’s French-speaking province of Quebec.

If you are for fewer immigrants, it’s easy [for the establishment media] to tag you as racist, and they did that last election [in 2019]. This election, they are not doing that because we’re not a racist party, we’re a smart populist political party, and we want to have this debate because we love our country.

Incumbent Prime Minister Justin Trudeau has already raised immigration to roughly 341,000 people in 2019. The migrants are touted as skilled, but they range from helpless geriatrics who rely on free healthcare, to unskilled refugees who fill unskilled jobs, to productive professionals who edge out Candian graduates. Overall, the huge inflow has delivered one immigrant for every three working Canadians.

Trudeau is a globalist, and his goal is to try to change the cultural character and social fabric of our country with his extreme multiculturalist policy and mass migration. When there’s a crisis somewhere, Trudeau is always the first one to say “Let’s bring in more and more people.” He said he is a citizen of the world, so it’s in line with his philosophy as a globalist.

Whether you were born in Canada or immigrated here to start a new life, you should support lower, more sustainable immigration levels in order to preserve our Canadian identity and cultures. pic.twitter.com/9T8EE1r4G3

Canadian government officials tout migration — and the parallel inflow of many temporary contract workers — as a boost to the nation’s economy, but not as a way to help Canadians prosper.

“Immigrants contribute to our economy, not only by filling gaps in our labour force and paying taxes, but also by spending money on goods, housing and transportation,” says the government’s web page.

Canada has roughly 8 million immigrants alongside the population of 3o million native-born Canadians. More than two in 10 Canadians are immigrants.

In the United States, immigrants comprise a smaller share, of roughly one in 10 Americans. They comprise about 30 million in a population of 320 million, not counting at least 11 million illegal migrants.

But the inflow also helps to flatten wages and spike housing prices far beyond the reach of most Canadians and new immigrants.

In March, the Wall Street Journal sketched one Canadian immigrant:

Nikhil David, 32 years old, said he struggled to find a job in his field when he arrived in Canada from India in July. Mr. David was exempted from Canada’s border restrictions because he had been approved as a permanent resident before the pandemic shutdowns began. After working for several months at a grocery store, he landed a part-time job doing wellness checks and food deliveries for elderly people.

“It’s definitely a kind of risk coming here and starting from scratch,” said Mr. David, who holds a graduate degree in social work from a university in India.

Amid the inflow, Canadians’ median household income rose by just about one percent per year from 2005 to 2019. That is just 17 percent in 14 years, after inflation.

In contrast, the U.S. Census Bureau reported in September 2020 that Americans’ “median household income increased 6.8 percent” amid President Donald Trump’s low-migration economic policy.  “It was a pretty banner year for households, and really across the income distribution, we got a lot of eye-popping figures in this release,” David Deull, the top economist at IHS Markit, told the Wall Street Journal.

Much of the economic pain caused by migration is felt in housing prices.

But in Canada, housing prices rose three times as fast, by 143 percent from 2005 to 2020, according to Statista.com. Prices jumped again in 2021: “The average home-sale price in Canada rose 26 per cent year over year in June … with sales activity up by 14 per cent,” CTVnews.ca reported August 10. 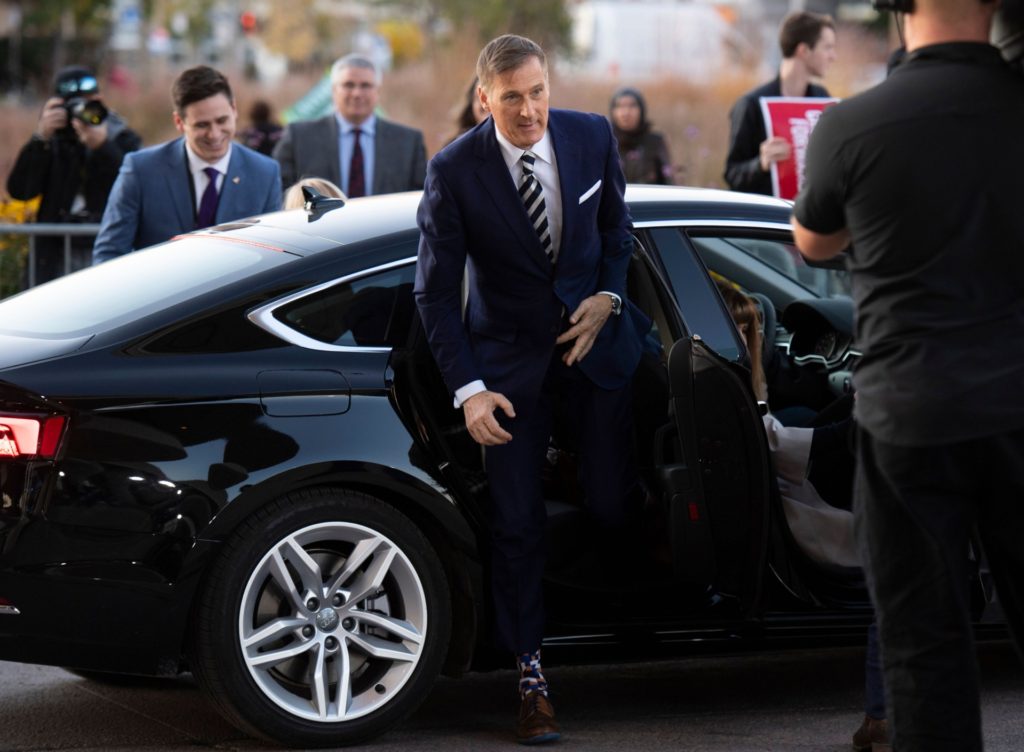 People’s Party of Canada leader Maxime Bernier arrives at The Leaders Debate at the Canadian Museum of History in Gatineau, Quebec on October 10, 2019. (JUSTIN TANG/POOL/AFP via Getty Images)

“Many young people across Canada are starting to realize that it will be difficult for them to live the same lives as their parents did,” thehabistat.com reported on August 4. It continued:

It is no longer a guarantee that by going to school and working hard, you could be reasonably sure to one day afford a home to comfortably raise a family in. This change in opportunity has unfolded in a single generation and is leading to national protests calling on politicians to address the housing crisis.

The price of a Canadian house is now 10 times the average income, compared to seven times the annual income in 2005, the site reported.

The two main establishment parties recognize the cause-and-effect, but they also refuse to roll back migration numbers. On August 19, for example, the Conservative Party announced its housing platform:

“We have a housing crisis in Canada,” said [Party leader Erin] O’Toole. “The supply of homes – to own as well as to rent – is not keeping up with our growing population and too many foreign investors are sitting on properties as investments. As Prime Minister, I will ensure we build and make more affordable housing options available for Canadians first.”

Trudeau’s Liberal Party promises to bar house purchases by foreigners and then to cut taxes and spend more to offset the impact of its pro-migration policies.

The same migration-inflated housing spikes are visible in New Zealand, California, New York, and the United States. In the United Kingdom, a team of experts suggested the immigration of 4 million has boosted housing prices by 21 percent.

The rising inflow of migrants comes as Canadian government economists recently relooked at the wealth of Canada’s 1 percent and shifted their estimate from 15 percent up to 25 percent. Another study says the 1 percent own 30 percent of Canada’s wealth.

A July 2020 report on the government study says the poor half of Canada’s population and of Canada’s middle-class now have a far lower share of wealth than in prior decades:

Recent research suggests the top one per cent’s wealth share may once again be increasing … In terms of its share of Canada’s wealth, the bottom fifty per cent has made essentially no progress, with their share since the 19th century never exceeding 10 per cent.  Indeed, the recent PBO report estimated the wealth share of the bottom 40 percent in 2016  at 1.2 percent of wealth.

Canada’s wealth gap is now close to the United States situation, where the wealthiest 1 percent owns roughly 32 percent of the wealth.

On the first of July of this year, I was the only leader of a national party in Canada to celebrate Canada Day and to say I was proud to be Canadian, but these other leaders were not there. When you push mass immigration and for more and more diversity in our country, that’s what you get. We want to stop that before we have social tension like they are in other European countries.

Bernier quit the conservative party in 2017 after narrowly losing a race for party chief in 2017.  He is now offering a classic populist-conservative answer — including opposition to deficit spending and inflation, as well as opposition to vaccination passports and mass lockdowns. “Inflation is a hidden tax … inflation is hurting poor people more than the rich people,” Bernier said.

“Canadians want to have a freedom voice, a c0monsense voice in Parliament, and they’re ready to have this debate about immigration, about [coronavirus] lockdowns, about vaccine passports,” he said.

The public — including new immigrants — is ready for a debate on the economics of migration, Bernier predicted:

They understand that we don’t have a sustainable immigration system. We have mass immigration and they don’t like what they’re seeing. So [our message] well received, but the challenge is the media don’t want to cover it, they don’t want to have the discussion. I’m the only one who is speaking about that.

But Bernier has yet to crack the media ‘s refusal to talk about the pocketbook politics of immigration. He was excluded from the media-carried campaign debate in late August, despite his outpolling the Green Party. 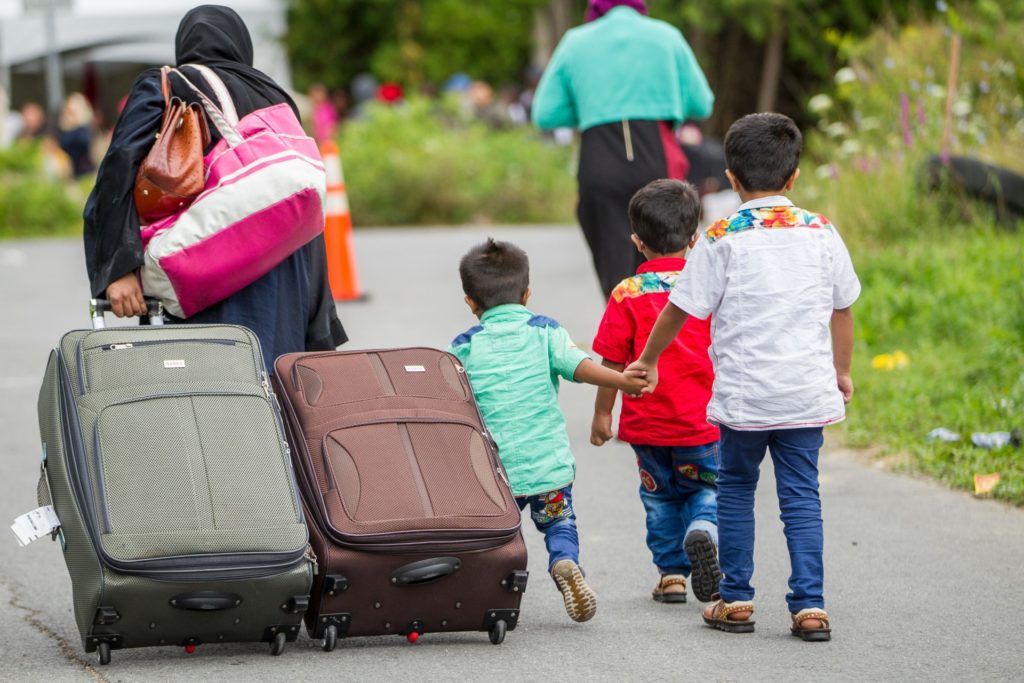 Many years of Canadian polls show a rough divide about migration levels, despite the elite consensus for more migrants. In a 2020 survey, 52 percent of voters said that “Canada should focus on helping unemployed Canadians rather than looking for skilled immigrants for our workforce.” And GlobalNews.Ca reported in 1019:

Sixty-three per cent of respondents to a recent Leger poll said the government should prioritize limiting immigration levels because the country might be reaching a limit in its ability to integrate them.

Just 37 per cent said the priority should be on growing immigration to meet the demands of Canada’s expanding economy.

Many of the voters who are worried about immigration are tempted to vote with the bigger, familiar conservative party. Canada has a “first past the post” counting system, so the big parties can win many of the 338 parliamentary seats even when a majority of the district votes are cast for several other parties.

But Canada’s conservative party wants even more migration. It has even picked a foreign-born businessman and homebuilder to be its minister for immigration. The party’s 2021 platform promises more migration, saying:

Canada’s Conservatives are the party that ended racial discrimination in Canadian immigration, the party that streamlined processes for refugees and persecuted minorities, and the party that ensured that those who arrive on our shores have the greatest chance to succeed.

Immigration does not just serve newcomers and their families. It also supports employers seeking to fill vital skill gaps and assists the public through the provision of essential public services. Accordingly, Canada’s immigration policies must match Canadian priorities.

The conservatives’ 161-page platform mentions wages just once, saying. “A disproportionate number of disabled Canadians are working part-time or for low wages.”

Bernier tweeted his response on August 25:

When fake conservatives like [Conservative leader Erin O’Toole] run on a leftist platform, the message to voters is that conservative, small-government principles and policies are not worth defending. If you’re a conservative, don’t vote for someone who is actively discrediting your beliefs.