The U.S. Capitol Police announced it will hold a vote of no confidence this week over multiple officials in its senior ranks, more than a month after the Capitol building was breached by a group of rioters amid the counting of electoral votes on Jan. 6.

According to the Capitol Police, while the vote “does not compel any specific action, it does speak to the sentiment and concerns of some of our officers that our senior commanders are working to address.”

Acting Chief Yogananda Pittman will be among the officials the vote is aimed at, the department announced. Pittman became acting police chief on Jan. 8 after Steven Sund announced his resignation from the position on Jan. 7.

The no confidence vote was called by the executive board of the Capitol Police Labor Committee (Capitol Police union). The vote is also being aimed against other members of the department’s senior leadership, including Assistant Chief Chad Thomas, acting Assistant Chief Sean Gallagher, and Deputy Chiefs Timothy Bowen, Jeffrey Pickett, and Eric Waldow.

Gus Papathanasiou, the Capitol Police union chairman, said in a statement, “The enormity of the multiple leadership failures both in leading up to the insurrection, and in the Department’s response to it, have convinced us there is no other choice. The leadership has failed us, and we have paid a terrible price.”

The Capitol Police union previously pointed out that Pittman had acknowledged in her testimony to Congress over the Jan. 6 event that “the Department knew that the January 6th event would not be like any of the previous protests held in 2020.”

“We knew that militia groups and white supremacists organizations would be attending,” she also told the House Appropriations Committee on Jan. 26. “We also knew that some of these participants were intending to bring firearms and other weapons to the event. We knew that there was strong potential for violence and that Congress was the target.”

The Capitol Police in its announcement on Feb. 10 said that the Jan. 6 riots on Capitol grounds were “tragic and heartbreaking” and acknowledged that two officers had died while others were “subjected to inexcusable violence during the attack.”

“Since the appointment of Acting Chief Pittman two days after the attack, she and her executive team took quick action to improve intelligence and operational communications with all officers,” the Capitol Police announced. “The team is also offering counseling and wellness support to all Department employees, including family members given the emotional toll so many are experiencing.”

The Capitol Police added that since Pittman’s appointment, she “has met with officers from every division and has grieved with the families and loved ones” of the officers who died. 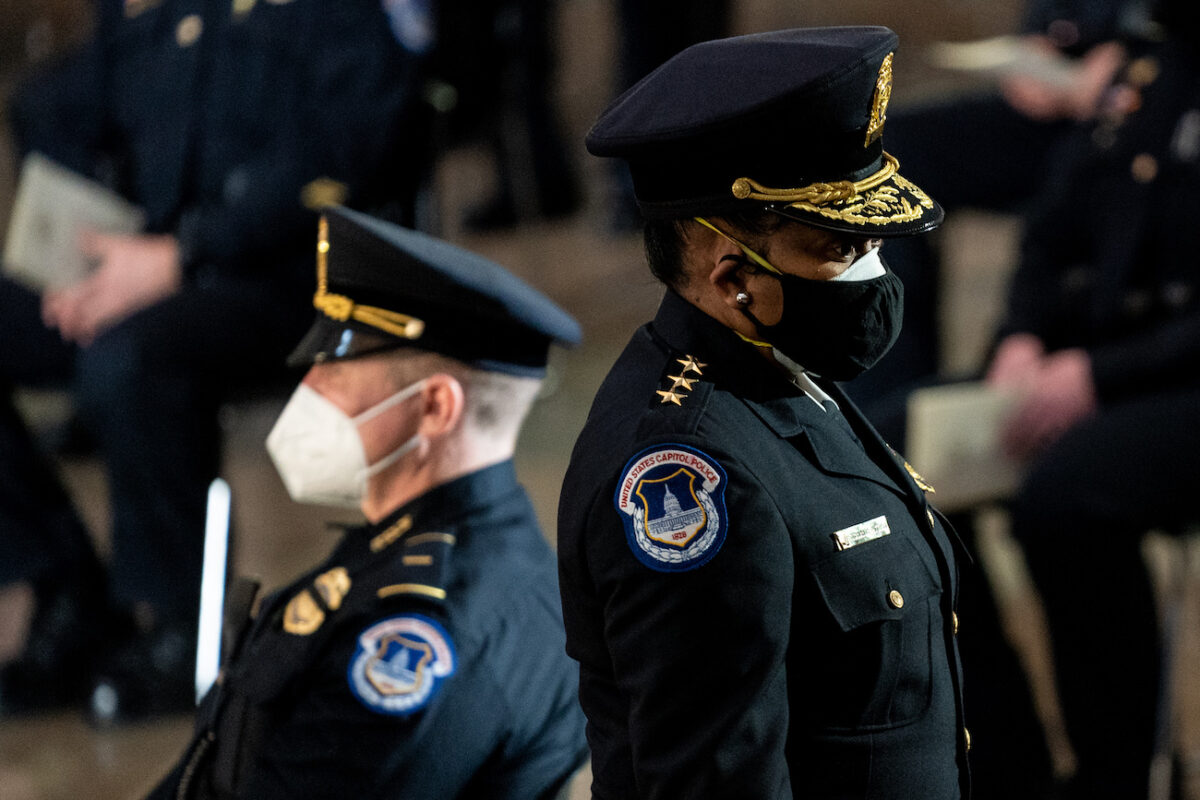 U.S. Capitol Police Acting Chief Yogananda Pittman departs at the conclusion of a congressional tribute to the late Capitol Police officer Brian Sicknick who lies in honor in the Rotunda of the U.S. Capitol in Washington, on Feb. 3, 2021. (Erin Schaff-Pool/Getty Images)

Capitol Police Officer Brian Sicknick died on Jan. 7 after he sustained injuries while “physically engaging with protesters” on Jan. 6, after which he “returned to this division office and collapsed,” the Capitol police said in a previous statement.

Capitol Police Officer Howard Liebengood, a 15-year veteran of the Capitol police, later died of suicide on Jan. 9 while off-duty. Liebengood was on duty during the riots at the Capitol.

The vote, to take place on Thursday and Friday, comes a week after Sicknick was laid in honor in the Capitol Rotunda.

The Pentagon and the office of Washington mayor Muriel Bowser didn’t immediately respond to requests for comment by The Epoch Times.

10 Feb at 9:45 pm
JUST IN: Newsom Recall Leader Says His Team Now Has Over the Needed 1.5 Million Signatures to Force a Recall Election This Year
ARIZONA: Maricopa County Libertarian Party Launches Election Integrity Lawsuit Against Board of Supervisors