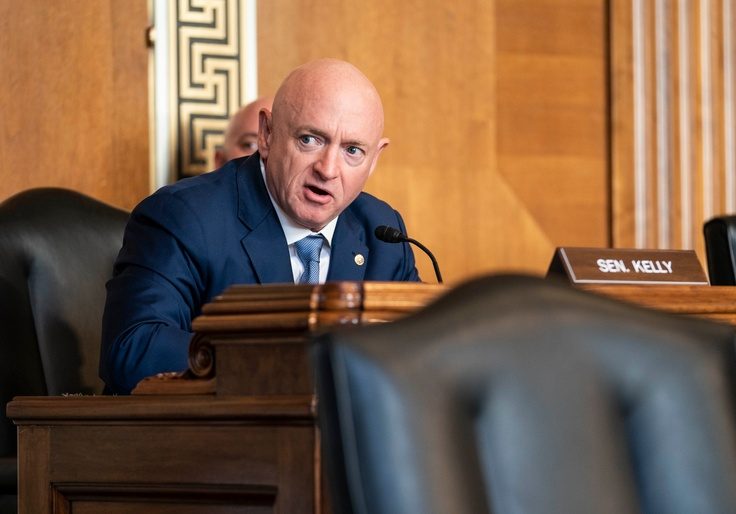 ‘Mark Kelly scares the hell out of us’

Kelly has repeatedly criticized President Joe Biden’s lack of urgency on the southern border crisis as a record number of illegal immigrants attempt to cross into the country. For National Border Patrol Council president Brandon Judd and Arizona Police Association president Justin Harris, however, Kelly has failed to match his rhetoric with action. Both Judd and Harris said Kelly has never reached out to their respective organizations, a snub that Judd called “concerning.”

“It appears that he’ll give lip service to a topic, but then when push comes to shove, he’s right in step with his party. And we know that as far as his party goes with border security, they’re missing in action,” Judd told the Washington Free Beacon. “He’s never reached out to us, and that is what’s concerning, because we have people reaching out to us all the time on both sides of the aisle.”

Harris accused Kelly of playing politics with the border crisis as he looks to secure reelection in 2022 in a state that has soured on Biden and his policies. Just 36 percent of Arizona voters approve of the president, according to a November Civiqs survey, and 63 percent “hold the Biden administration and its policies responsible for the current immigration and border crisis,” a July Federation for American Immigration Reform poll shows. Kelly’s own approval rating has taken a 12-point hit among the state’s suburbanites, a general voting block that has already helped deliver double-digit Republican gains in Virginia and New Jersey.

Kelly spokesman Jacob Peters called the Democrat a “son of two police officers” who “has been a consistent and effective advocate for Arizona’s border and law enforcement priorities.” Peters also said Kelly “looks forward” to meeting with the National Border Patrol Council in the near future. According to Peters, Kelly’s office reached out to the council “months ago” to schedule a meeting, a claim Judd disputed.

This is not the first time Kelly has reportedly ignored the National Border Patrol Council. During Kelly’s 2020 campaign, council vice president Art Del Cueto said the Democrat refused to shake his hand at a Tucson Veterans’ Day parade after Kelly identified him as “with the Border Patrol guys.” Kelly has disputed the claim.

While Kelly has looked to distance himself from Biden’s border policies, his “voting record is in lockstep” with the president, Judd said. Kelly in February voted against an amendment to protect former president Donald Trump’s “Remain in Mexico” policy, which forces most migrants to wait in Mexico before their U.S. immigration court hearing. Just months later, Kelly voted down an amendment that would have prohibited the Biden administration from canceling border wall contracts for which federal funds have already been appropriated.

A number of well-funded Republicans have entered the race to unseat Kelly in next year’s midterm elections, including Arizona attorney general Mark Brnovich, tech executive Blake Masters, and solar power CEO Jim Lamon. Both Judd’s and Harris’s organizations have endorsed Lamon—for Judd, the decision stemmed from Lamon’s “regular communication” with the council.

“We sat down with Jim, we sat down with Blake Masters. From a policy standpoint, they’re both very good,” Judd said. “The difference was Jim was constantly reaching out. He would hear something in the news and say, ‘Hey, what do we need to do to fix that?’ He was very engaged on the issue of border security.”

Winsome Sears says voters are 'tired' of black and white people being pitted against each other, fires back at 'SNL' for gun joke