Democrats Are Right to Worry About the Georgia Runoffs

The Georgia Senate runoffs are one week away, and Democrats are reportedly worried about their chances. Jon Ossoff and Rev. Raphael Warnock are running against Republican Sens. David Perdue and Kelly Loeffler. While Joe Biden won a narrow (and contested) victory in the presidential race in November, Democrats are right to worry about the Senate runoffs, although Republicans cannot take anything for granted.

Ossoff and Warnock sounded the alarm about their ability to keep pace with GOP spending in the race, calling for a “significant increase” in donations to keep them afloat for the next week.

“To win this election in 8 days, we need to continue our historic efforts to turn out every single voter — but we won’t be able to do that if our fundraising revenue continues to fall,” Warnock campaign manager Jerid Kurtz and Ossoff campaign manager Ellen Foster wrote in a memo obtained by NBC News.

While Ossoff and Warnock both raised more than $100 million over the past two months, outraising Perdue and Loeffler, Republican outside groups are outspending Democratic groups.

Conservative groups have mobilized to defend the Republican Senate majority. Heritage Action, the political action arm of the Heritage Foundation, had knocked on more than 100,000 doors and contacted more than 750,000 voters in the Atlanta area by mid-December. Women Speak Out PAC, the action partner of the pro-life group Susan B. Anthony List, also plans to contact 750,000 voters at their doors. Catholic Vote also aims to mobilize 215,000 mass-attending Catholics in Georgia.

An anonymous source described Senate Minority Leader Chuck Schumer (D-N.Y.) as “pessimistic” about Ossoff’s and Warnock’s chances and reticent about calling donors to ask for cash.

Schumer vehemently denied that report, however. “This is absolutely not true and this anonymous ‘source’ has no idea what they’re talking about, and it’s really sad NBC published it. Schumer has diligently made calls and fundraised for both Georgia candidates and is optimistic about their chances in January,” Justin Goodman, a spokesperson for Schumer, told NBC News.

The conservative mobilization does not sum up Democrats’ reasons to worry about January 5.

Both Ossoff and Warnock have attacked their Republican opponents for supposedly opposing COVID-19 stimulus checks. Ossoff went so far as to claim that Perdue “fought against stimulus checks for the entire pandemic,” even though Perdue voted for the $1,200 stimulus checks in the CARES Act.

Both Perdue and Loeffler not only voted for the $600 stimulus payments in the most recent COVID-19 relief bill but also supported President Donald Trump’s call to raise the stimulus payments to $2,000, bucking Senate Majority Leader Mitch McConnell (R-Ky.). 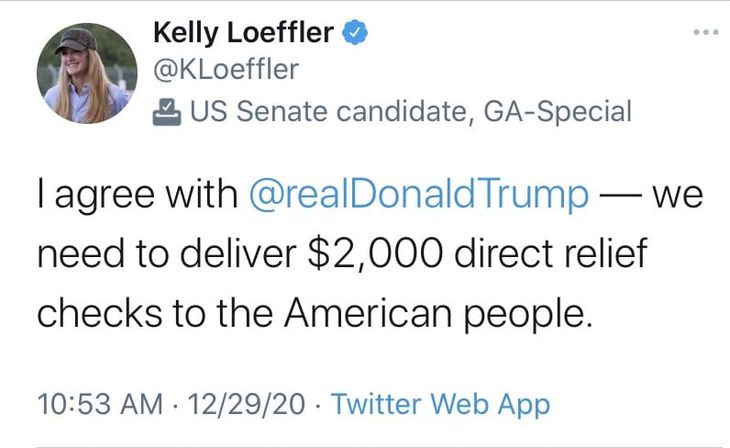 Meanwhile, Warnock’s campaign has suffered from revelation after revelation of Warnock’s extreme past. Warnock served as assistant pastor at a church that hosted Cuban dictator Fidel Castro in 1995. He carried water for Castro after the dictator’s death in 2016. He compared the 2017 Trump tax cuts to King Herod’s slaughtering of baby boys. While Barack Obama distanced himself from the notorious Jeremiah Wright in 2008, Warnock not only defended Wright but hosted the “God damn America” pastor at his church in 2014.

Uncovered footage showed Warnock’s wife accusing him of driving over her foot and stealing the children. While her claims are disputed, it seems remarkable she would call the police on her husband. Most recently, allegations of child abuse surfaced at a summer camp Warnock oversaw.

Joe Biden is likely to become president on January 20, and it is essential for a Republican Senate to block his most extreme policies. While Biden is not as extreme as open socialists Sen. Bernie Sanders (I-Vt.) and Rep. Alexandria Ocasio-Cortez (D-N.Y.), he has embraced radical proposals on abortion, climate change, transgenderism, and more. Biden spent his Senate career upholding the Hyde Amendment, which prevents taxpayer dollars from directly funding abortion. Now, he opposes Hyde.

Perhaps worst, Biden has a record of going soft on China and his son Hunter raked in cash from lucrative deals with Chinese Communist Party-linked companies. According to Tony Bobulinski, Joe Biden himself is implicated in these deals. If Republicans lose the Senate, the Senate may not investigate this important scandal.

Republicans picked up seats in the House of Representatives this year, but not enough to wrest the majority away from ever-more-radical Democrats.

While Perdue and Loeffler may have an edge, Republicans cannot afford to sit on the sidelines. Democrats and left-wing groups are fighting to preserve mail-in voting measures that arguably weaken the integrity of the election system, in the name of helping people vote during COVID-19. These measures may also give them an edge.

According to the RealClearPolitics average, Ossoff (0.8 percent) and Warnock (1.8 percent) enjoy slight leads over their Republican opponents. This may not mean much, as Perdue and Loeffler both outperformed the polls on November 3.

Perdue and Loeffler may have the real edge, but Republicans cannot take the runoffs for granted.

Tyler O’Neil is the author of Making Hate Pay: The Corruption of the Southern Poverty Law Center. Follow him on Twitter at @Tyler2ONeil.

5 Things to Know About the Georgia Runoff Debates

Georgia Deputy Dies After Being Shot by Fleeing Suspects