A conscious decision was made to ensure that every allegation made in a recent legal challenge filed by the Trump campaign in Georgia was substantiated by expert or eyewitness testimony, attorney Cleta Mitchell said.

Mitchell is an attorney assisting the Trump campaign in its legal efforts to protect the integrity of the vote. The campaign recently filed an election contest in the Peach state alleging that several election officials committed “repeated violations of the election code,” resulting in illegal votes being cast and counted.

The contest petition, filed on Dec. 4, identifies several groups of people who voted illegally, including “2,560 felons; 66,247 underage voters, 2,423 votes from people not registered; 1,043 individuals registered at post office boxes; 4,926 individuals who voted in Georgia after registering in another state; 395 individuals who voted in two states; 15,700 votes from people who moved out of state before the election; 40,279 votes of people who moved without re-registering in their new county; and another 30,000 to 40,000 absentee ballots lacking proper signature matching and verification.”

Mitchell, who has been focused on preparing the recent Georgia case, said every claim presented in the petition is grounded in fact and that eyewitness accounts were vetted to ensure that the most salient were included in the lawsuit.

“There’s not a single allegation in the contest petition that is not substantiated and supported by either a sworn affidavit under penalty of perjury by an eyewitness or by an expert who has studied and analyzed the state’s election data,” Mitchell told The Epoch Times’ “American Thought Leaders” in a recent interview. 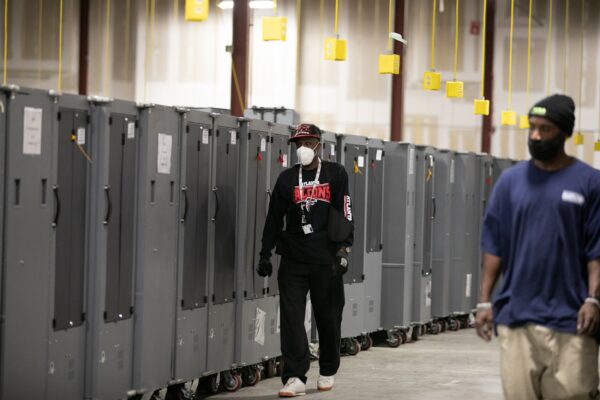 The Trump campaign and Republicans have launched a slew of challenges in several battleground states across the country in their attempt to protect the sanctity of the ballot box. They are claiming that actions by election officials in those states have allowed illegal votes to be cast and for legal votes to be uncounted.

Some of the lawsuits are also challenging the election results based on allegations that election irregularities were caused by vulnerabilities of the voting systems used in the election.

Many of the allegations about election fraud have been denied by officials, while critics and members of the media have characterized claims as “baseless.” But as the legal challenges continue to proceed through the courts, testimony backing up the claims is beginning to emerge. Meanwhile, Trump campaign lawyers and Republicans have recently held hearings in several states to allow witnesses to testify before lawmakers about election irregularities.

Georgia on Dec. 7 affirmed the state’s election victory in favor of Democratic nominee Joe Biden following several recounts without signature verification. According to official results from the state’s website, of almost 5 million votes cast, Biden received 12,670 more than President Donald Trump, which is less than the number of votes the Georgia election contest claims is invalid.

The lawsuit is also asking the court to order state officials to “make available 10,000 absentee ballot applications and ballot envelopes from respondents … and access to the voter registration database sufficient to complete a full audit.”

Mitchell said the Trump campaign has requested Secretary of State Brad Raffensperger five times to conduct a signature-matching audit, which he refused.

The election contest was filed in the Superior Court of Fulton County.

Other lawsuits have also been filed in Georgia including one by lawyer Sidney Powell who is seeking to invalidate the election results in the state over allegations of “massive fraud,” in particular ballot stuffing and voter manipulation through the use of the Dominion voting system. She filed the lawsuit on behalf of a group of Republicans. A federal judge has dismissed the case, prompting an appeal to the circuit court.

9 Dec 2020
Georgia
Supreme Court Rejects Injunction on Pa. Election Lawsuit; Texas Case Docketed
The Texas Lawsuit Is On The Docket – The Supreme Court Will Determine The Fate Of The 2020 Election