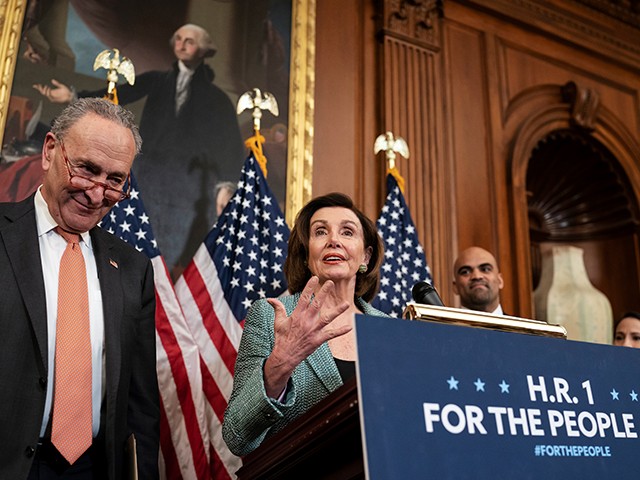 According to part of a lengthy public records request filed by the Public Interest Legal Foundation (PILF) and exclusively provided to Breitbart News, Bellows’ Communications Director Emily Cook was reportedly a member of a Slack channel including leftist activists from League of Women Voters, Protect Democracy, Organizing for Action, Greenpeace, Southern Poverty Law Center Action, Code Pink, Oxfam, and many more. Slack is a non-public messaging app often used by businesses and can require two-factor authentication to access.

Tucked within the 590-page request, PILF, a law firm wholly dedicated to election integrity, discovered an email to Cook’s state email address received from Slack, updating her on new messages to conversations of which she is a part within the Slack workspace allegedly run by Declaration for American Democracy. The organization describes itself as “an anti-oppression coalition working together to make the promise of democracy real for all of us.”

Senate Minority Leader Chuck Schumer (D-NY) and Speaker of the House Nancy Pelosi (D-CA) call on Senate Majority Leader Mitch McConnell (R-KY) to bring the Democrats’ HR-1 “For the People Act” to the floor for a vote, during an event on Capitol Hill in Washington, Tuesday, March 10, 2020. (AP Photo/J. Scott Applewhite)

On March 24, the group outlined plans to discredit Warner, West Virginia’s top election official, for his opposition to H.R./ S.1, heavy-handed Democrat-sponsored legislation, which would ultimately federalize elections under the murky guise of protecting “voters’ rights” from Republicans. In a Slack channel message timestamped at 9:18 a.m., Jonah Minkoff-Zern, a “democracy advocate” for Public Citizen, warned the group that Warner was expected to testify that day before the United States Senate — including moderate West Virginia Sen. Joe Manchin (D) — disavowing H.R. 1/S. 1 (also called the For the People Act).

Manchin, who often holds out on legislation held dear to the far-left-wing of the Democrat Party, would play a key role in passing the For the People Act, especially due to his position on the filibuster. S.1’s passage relies on a super-majority vote — support from 60 out of 100 senators — so Democrat’s slim majority in the Senate is not enough to pass the bill.

“WV Secretary of State Warner is getting a lot of attention already in WV for speaking out again[st] HR 1 and is testifying today. Warner is a ‘Stop the Steal’ guy so there’s lots we could and need to do,” Minkoff-Zern wrote in the Slack channel.

He continued, quoting alleged guidance from For West Virginia’s Future, which reportedly advised the coalition to “discredit Warner’s reputation” and emphasize “his work spreading the Big Lie.” They also advised to keep Manchin out of the campaign and to avoid “nationalizing the convo by mentioning Republicans or Biden.”:

Do we have or could folks create some talking points and sample posts that are ready to go and we could share around using the following guidance from our friends with For West Virginia’s Future: “My general suggestion is two-fold: 1) Discredit Warner’s reputation as much as possible ahead of the hearing for his work spreading the Big Lie and current misinformation inside WV. 2) Redirect any false talking point he presents inside the hearing a la Race Class Narrative – don’t spend time repeating his falsehoods, instead talk about what the act means for everyday Americans and how folks like Warner are stopping that for their own selfish political reason, aka he’s showing us why this Act is so important. General recommendations: avoid nationalizing the convo by mentioning Republicans or Biden, don’t draw Manchin in on this, and don’t spend any time repeating his lies…” 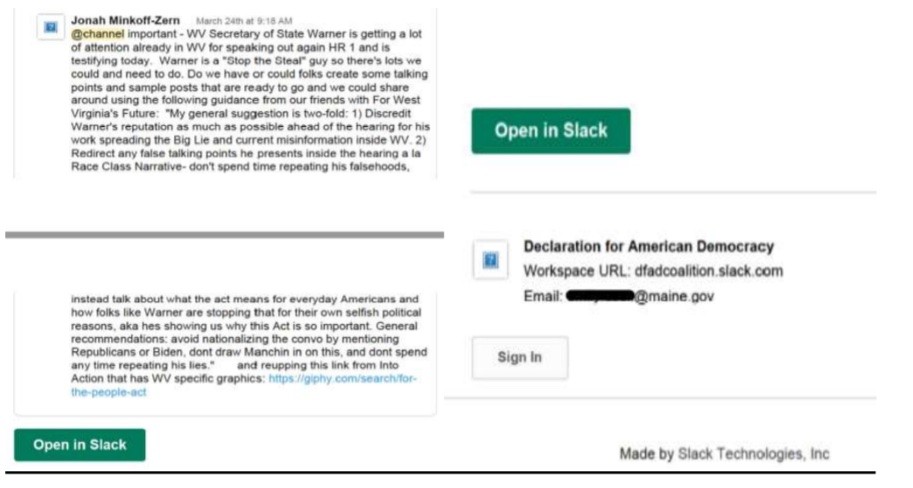 Lauren Bowman, spokeswoman for PILF, confirmed to Breitbart News that while Cook did not direct activists in the group to smear Warner, her “involvement in a [S]lack group is deliberate.” PILF reportedly did not find any proof within the confines of the public records request that any other politicians or aides were involved in the channel.

Bowman told Breitbart News that Cook was Bellows’ only staff member in the Slack channel and that the message from Minkoff-Zern was the only one of its kind found in the 590-page public records request. PILF reportedly did not reach out to the Maine Secretary of State’s Office upon discovery of Cook’s presence in the Slack channel.

Breitbart News reached out to Cook and to Bellow for comment, asking if they wished to respond to the accusation. Breitbart News also asked if it is the typical practice of the Maine Secretary of State’s office to collaborate with partisan organizations who discredit government officials with differing opinions and if any disciplinary action had been taken. Neither Cook nor Bellows responded to a request for comment by the time of publication. It is also unclear if Cook is still a part of the Slack channel. 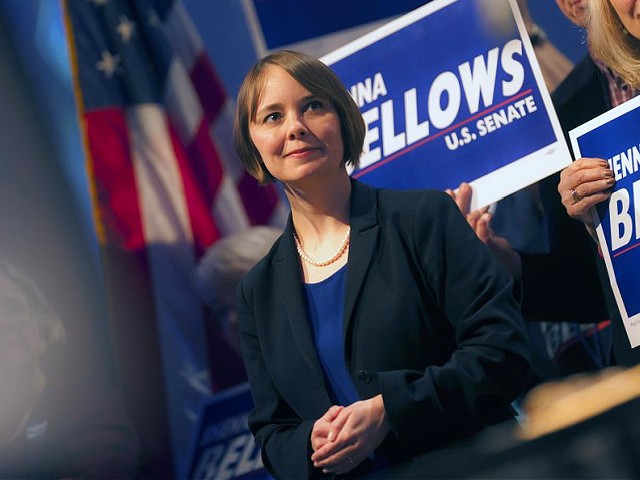 Warner’s office had no knowledge of the alleged attempted smear campaign when Breitbart News reached out for comment on Monday, though Director of Communications for Secretary Warner Mike Queen said he was “disappointed to think that something like this could be true.”

“While they may disagree at times on policy issues, Secretary Warner has always respected Secretary Bellows. And I believe that feeling is mutual,” Queen said. “If I was ever part of coordinating a secret smear campaign behind Secretary Warner’s back and against another Secretary of State, I’d be looking for another job the same day Secretary Warner found out what I was doing.”

As for the For the People Act, Manchin ended up being the only Democrat hold-out. A slimmer bill was later introduced, called the Freedom to Vote Act, which is co-sponsored by Manchin and reportedly addresses his qualms with the previous version. Republicans successfully blocked the legislation from passing on October 20, voting 49-51 to end debate. It is the second time Republicans have filibustered to prevent a Democrat voting bill from advancing, though Senate Majority Leader Chuck Schumer (D-NY) voted against advancing it so that he could bring it up for a vote again in the future. 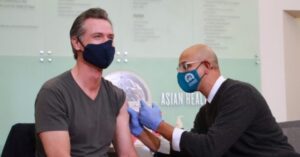