Authored by Mimi Nguyen Ly via The Epoch Times (emphasis ours),

Voters go to the polls at Sara Smith Elementary polling station, in the Buckhead district, in Atlanta during the Georgia Senate runoff elections, on Jan. 5, 2021. (Virginie Kippelen/AFP via Getty Images)

The 66-page bill, HB 531 (pdf) passed the Republican majority chamber on a party line vote of 97-72 and is headed to the state Senate for further debate.

State Rep. Barry Fleming, a Republican, the main sponsor of the HB 531 bill, said that the proposal was designed to restore voters’ confidence in Georgia’s election system following the 2020 presidential election, which saw numerous allegations of voting irregularities and allegations of election fraud.

The proposed HB 531, first introduced on Feb. 18, sets up multiple requirements for absentee ballots, including a number of voter identification requirements in replacement of the state’s current signature match process.

Voters would have to submit their driver’s license number, their state identification card, or the last four digits of their Social Security number on the ballot envelope. If the voter lacks a government ID, the bill requires a copy of a current utility bill, bank statement, government check, paycheck, or other government document that shows the name and address of the voter.

Under the new bill, voters would be able to request an absentee ballot up to 78 days before the election, instead of the current 180 days. The absentee ballots and early votes must be received by 11 days prior to the election day.

The government, including election officials, would not be allowed to mail out unsolicited applications for absentee ballots to voters under the bill. Only authorized relatives or persons signing as helping a voter who is illiterate or physically disabled may apply on behalf of another for an absentee ballot application .

Election officials also must not send out absentee ballots until four weeks prior to the election.

To help reduce Georgia’s runoff period to four weeks, instead of nine weeks as experienced by the state in the Jan. 2 runoff elections for two Senate seats, military and overseas voters would be offered ranked choice voting.

Drop boxes would still be allowed under the new bill but subject to a number of restrictions. There would be a limited number of drop boxes, where every county would have at least one drop box but no more than one per 100,000 active voters or one for each early voting site. Any given drop box must be located at the office of the board of registrars or absentee ballot clerk, or indoors at an early voting site. The drop boxes are only open when those sites are open and be under constant surveillance “by an election official or his or her designee, law enforcement official, or licensed security guard.” 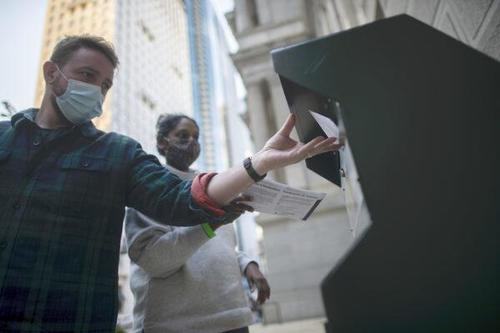 The proposed legislation would change Georgia’s early voting period to business hours of 9 a.m. to 5 p.m. starting about three weeks before election day, and registrars would have the option to extend voting hours to 7 a.m. to 7 p.m. The bill would also limit weekend voting to the second Saturday before the election. Counties can also choose the third Saturday or third Sunday before election day as another weekend day.

Per the bill, ballots would be required to be printed on “security paper that incorporates features which can be used to authenticate the ballot as an official ballot but which do not make the ballot identifiable to a particular elector.“

Election superintendents and boards of registrars are not allowed to accept any “funding, grants, or gifts from any source other than from the governing authority of the county or municipality, the State of Georgia, or the federal government,” under the bill.

Among other voting requirements, the bill also prohibits people to solicit votes, distribute or show any campaign material, or provide money or gifts—including food and drink—within 25 feet of voters standing in line at any polling place, and within 150 feet of any polling place.