Authored by Zachary Stieber via The Epoch Times (emphasis ours)

Several poll observers in Georgia said under penalty of perjury that they were effectively told to go home on election night before ballot counting resumed for several hours with no observers present.

Republican poll observers Mitchell Harrison and Michelle Branton said in affidavits that at approximately 10:30 p.m. on Nov. 3 inside an absentee ballot counting room State Farm Arena, a woman shouted to everyone to stop working and return the following morning at 8:30 a.m.

“This lady had appeared through the night and Mitchell and I believed her to be the supervisor,” Branton wrote in an affidavit.

Following the instruction, nearly all workers left, except a handful of people. All ballot counting stopped.

The poll observers were the only outsiders left, along with a Fox News crew. Harrison spent time seeking answers from Regina Waller, the Fulton County’s public affairs manager for elections, but she refused to answer the questions, he said in an affidavit.

A few minutes later, Branton, Harrison, and the crew left. Only four people remained in the room including Waller, when they had departed.

The group later heard that ballot counting had resumed at the arena, despite the public being told that it had ceased for the night. Observers rushed back at around 1 a.m. on Nov. 4 and found that to be the case.

An absentee ballot processing room at State Farm Arena is empty save for a handful of workers, after observers heard officials say ballot counting would be halted for the night, in Atlanta, Ga., on Nov. 3, 2020. (NTD Television via President Donald Trump’s campaign)

David Shafer, the head of Georgia’s Republican Party, said Thursday in a statement: “Our Republican observers and members of the news media departed State Farm when they announced they were shutting down for the night and would resume counting at 8:30 a.m. the next day.”

Citing surveillance video footage that showed everyone leave but a handful of workers, he said the workers “continued counting ballots in secret until 1 a.m.”

The footage was presented by President Donald Trump’s campaign during a state legislature hearing this week. It appears to show a few workers pulling out boxes filled with ballots from underneath tables and counting them after the room cleared.

Officials insist the video does not show fraud. They said Friday they are probing why poll observers left on election night.

“We have launched an investigation into why the monitors from the political parties left before scanning ended. While it was their right to leave early, we want to make certain they were not misled into thinking scanning had stopped for the night when it had not,” Walter Jones, a spokesman for Georgia Secretary of State Brad Raffensperger, told The Epoch Times via email.

The issue appears to center around semantics. While observers weren’t explicitly told to leave, they believed counting was stopping because officials made it seem that way.

Waller told ABC on election night that the county’s election department sent the ballot counters at the arena home at 10:30 p.m. Waller told The Epoch Times in an email, “For clarification, I informed ABC News that some workers left but four remained.” 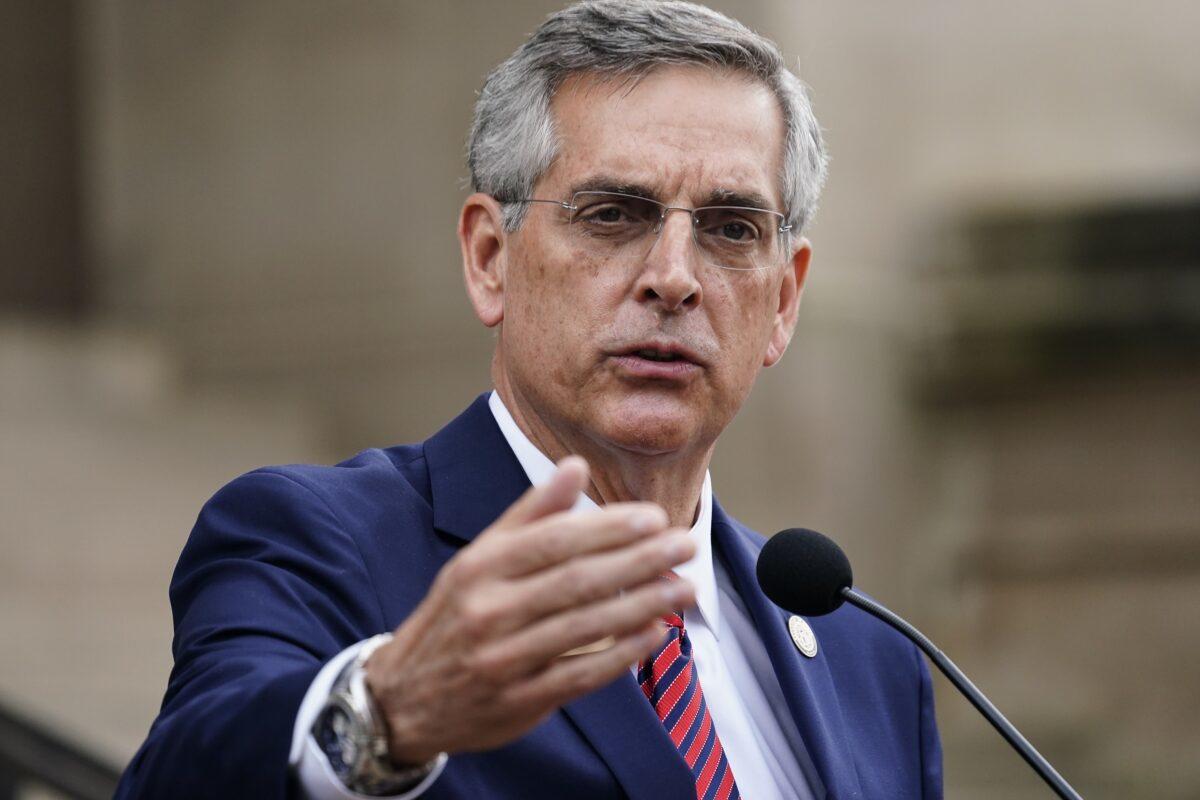 Raffensperger and his team “are busily ‘investigating’ whether or not Fulton County elections officials sent our monitors home on election night, as if that question is actually in dispute,” Shafer wrote in a tweet on Friday. Gabriel Sterling, an official in Raffensperger’s office, “has accepted Fulton County’s explanation that the Republican monitors and news media are to blame for believing the election officials who told them that they were shutting down, packed up the voting equipment, and started cleaning,” Shafer added in another post.

Sterling said in a statement that the video “shows normal ballot processing.” He said investigators with his office watched the surveillance footage. Sterling and other state officials have said Fulton County “cut corners” and showed “managerial sloppiness” in handling the election and subsequent recounts.

A county spokeswoman told The Epoch Times on the day after the election Registration & Elections Director Richard Barron told the Board of Commissioners that when he learned that staff were dismissed at 10:30 p.m., he advised that some workers needed to continue.

“Based on that directive, a smaller crew continued to work through the night. It may be possible that observers left at the time the majority of the staff left, but from the information we have, the processing area was never closed to observers,” she wrote.

Other people in Georgia said they were inexplicably told to go home.

Poll manager Susan Voyles, who was helping audit ballots at Georgia World Congress Centers, said she was told to go home on Nov. 15 after counting just 60 ballots, even though workers at nearby tables had thousands to process.

“We offered to help on some larger piles that were still evident, and the officials present were adamant that they did not need any help,” she said in an affidavit. 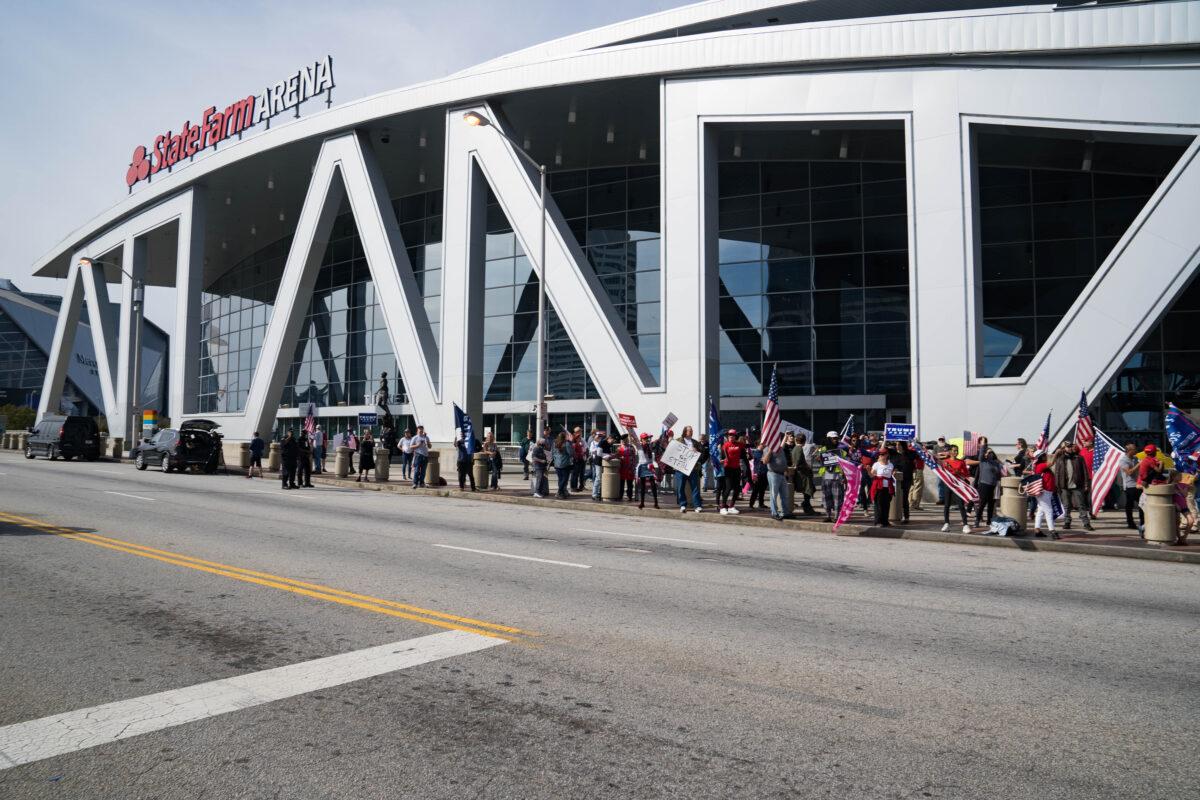 Supporters of President Donald Trump protest outside State Farm Arena as ballots continue to be counted inside, in Atlanta, Ga., on Nov. 5, 2020. (Megan Varner/Getty Images)

That same day, county officials told most of the counters to go home around 9:10 a.m., Maria Diedrich, a monitor for Trump’s campaign, said in an affidavit.

Carlos Silva, a trial lawyer from Florida, said in an affidavit that he saw two vote counters in Dekalb County pull out a pile of ballots that had two distinct characteristics.

“One, I noticed that they all had a perfect black bubble and were all Biden select. I was able to observe the perfect bubble for a few minutes before they made me move away from the table. At no time did I speak to the poll workers or obstruct them in any way. I heard them go through the stack and call out Biden’s name over 500 times in a row,” he said.

He also said he witnessed something similar in Cobb County.

Nicholas Zeher, another observer, said he never saw vote counters or anyone else verifying signatures as ballots were counted. He also said he saw ballots on a review table with markings only for Biden and no other candidate. And he saw a batch of ballots where the bubble for Biden appeared to be a perfect black mark.

The affidavits were entered in a federal court case, Pearson v. Kemp.