Georgia Recount Plagued by Anomalies, According to Sworn Affidavits

A recount of ballots in Georgia intended to determine the outcome of the 2020 Presidential election has come under scrutiny as multiple poll observers in sworn affidavits describe significant anomalies in the recount.

The affidavits, under penalty of perjury, are part of an emergency motion filed on Nov. 17 in a bid to halt the certification of Georgia’s results for the Nov. 3, 2020, election. 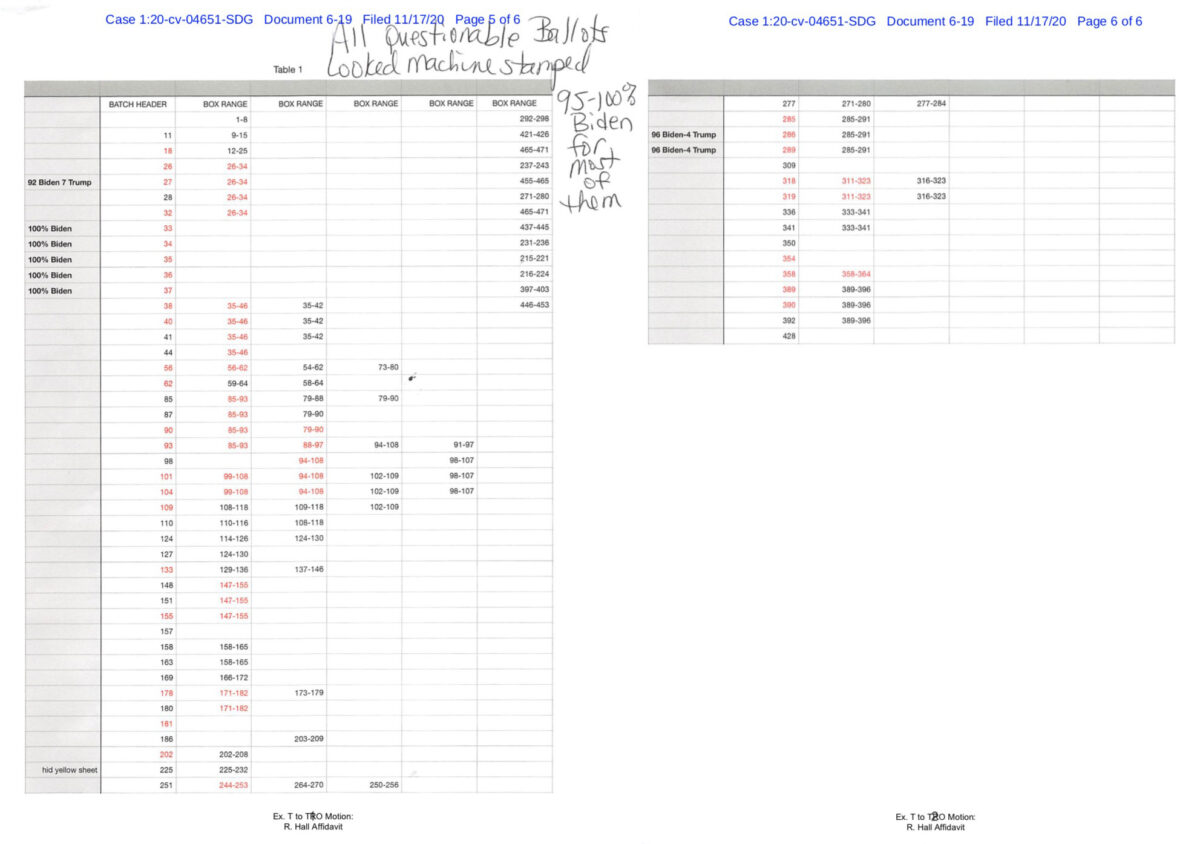 A screenshot of a spreadsheet filed by certified Fulton County recount observer Robin Hall as part of a Nov. 17, 2020, sworn affidavit. Hall said “many of the boxes of ballots had voted 100% for Biden and 0% for Trump.” (Screenshot/Epoch Times)

A poll manager in the Sandy Springs precinct of Fulton County noted how she was provided a box of ballots on Saturday, Nov. 14, that had been shut with packing tape bearing the seal of the Secretary of State. But “the seal was blank, signed by no one, and no information had been supplied,” she testified. Nor was there any designation detailing the origin of the box or its contents.

Inside the box were stacks of ballots, each stack containing approximately 100 ballets each. The poll manager noted that while most of the ballots showed obvious signs of handling, one batch “stood out” for their “pristine” condition.

She also observed a “slight depressed pre-fold so they could be easily folded and unfolded for use in the scanning machines.” There were no markings on the ballots that showed their origin or where they had been processed. In her words, these ballots “stood out.”

These particular ballots contained markings for the candidates that were “unusually uniform, perhaps even with a ballot-marking device.” According to her estimate, approximately 98 percent of these ballots were votes for former Vice President Joe Biden, with only two ballots constituting votes for President Donald Trump.

At the end of her sworn statement, the poll manager stated her belief that “additional absentee ballots had been added in a fraudulent manner.”

The poll manager left that day at 4:45 pm. She noted in her sworn remarks that she asked a guard what his hours of duty extended to. He told her that he would be present until 11:00 p.m., at which point a new shift would arrive to cover the hours of 11:00 p.m. to 7:00 a.m.—matching the time at which the poll manager was scheduled to return.

The following day, Sunday, Nov. 15, upon arriving, the poll manager was struck by how few auditors were present on that day’s count.

At this point, the poll manager began to notice a disparity in workloads being assigned. Surrounding tables, whose occupants had arrived after the poll manager, began receiving large boxes of ballots. Forty-five minutes later, when the poll manager’s table was finally provided ballots, their box contained only 60 ballots.

According to the poll manager, other auditing tables received boxes “with over 3,000 ballots each.”

When the poll manager’s table finished with the small box of ballots, they were told their assistance was no longer required and were instructed to “go home.” Offers to assist the other tables with their much larger number of ballots were refused by site officials.

The poll manager noted that she elected to stay at her table for a bit and observe the nearby auditors as they worked. Although she had been explicitly told that no food or drink would be allowed on the table, she noted that individuals behind and in front of her had “open water bottles, breakfast burritos supplied by the BOE [Fulton County Board of Elections] and snacks on their tables.”

Notably, she observed that the individuals at these tables were not counting ballots in a team fashion—a process used to ensure accuracy of each ballot count. Instead each auditor was “counting individually.” The poll manager noted that this individualized recount process was “consistent with the lack of preparation, contingency plans, and proper procedures” that she experienced “in this unusual election.”

The poll manager then provided a noteworthy example of the lack of proper procedures on Election Day itself.

According to the poll manager, ballot marking devices are supposed to be received “on the Friday before the election, with a chain of custody letter to be signed on Sunday, indicating that we had received the machines and counts on the machines when received, and that the machines had been sealed.”

However, during this election, the poll watcher stated that the “machines were not delivered until 2:00 a.m. in the morning on Election Day.” She noted that this delivery process was “unacceptable and voting machines should not be out of custody immediately prior to an Election Day.”

As she stated, “It is possible that these ballot marking devices could have been used for other purposes during that period.” The affidavit did not detail what these purposes might have been.

To make matters worse, when the machines did arrive at her precinct, they were remarkable in their lack of secured status. As she documented in her sworn statement, the machines “were not sealed or locked, the serial numbers were not what were reflected on the related documentation, and the green bar coded tags that are supposed to cover the door covering the memory card was broken.”

The poll manager stated that although her supervisor instructed her to use the machines, she knew this was outside of standard procedures and refused to place the machines into service. 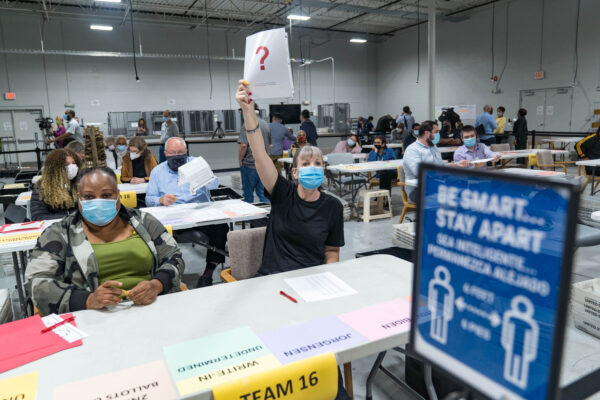 A Gwinnett county worker raises a piece of paper indicating she has a question as the recount of ballots begins in Lawrenceville, Ga., on Nov. 13, 2020. (Megan Varner/Getty Images)

The observations of the poll manager are borne out by sworn statements from others involved in the Georgia recount. An observer at the Cobb County Poll Precinct, who is a Democrat and licensed paralegal, noted how she observed poll workers counting the ballots in silence, not verifying the names aloud.

Additionally, she described unusual sets of ballots similar to those described by the poll manager. In sworn testimony, she said that “hundreds of these ballots seemed impeccable, with no folds or creases. The bubble selections were perfectly made (all within the circle), only observed sections in black ink, and all happened to be selections for Biden.”

This observer also stated that “signatures were not being verified” and there “were no corresponding envelopes seen in site.” She concluded her sworn statement by noting, “I believe there was fraud committed in the presidential election and question the validity of the Georgia recount process.”

Another poll observer, a Democrat and Florida trial lawyer, traveled as an observer to the Dekalb County Poll Precinct. In his sworn statement, this observer noticed ballots with two distinct characteristics: “they all had a perfect black bubble and all were Biden select.” The observer stated that as workers went through the ballots, Biden’s name was called “over 500 times in a row.”

The following day, this same observer went to the Cobb County Poll Precinct where he again noted the same ballot characteristics: “they were all for Biden and had the same perfect black bubble.”

The observer stated that he saw “absentee ballots for Trump inserted into Biden’s stack and were counted as Biden votes.” He stated that during three days spent in Atlanta, “not once did anyone verify signatures on these ballots.”

The observer concluded his testimony by stating: “in the counties that I have observed, there is widespread fraud favoring candidate Biden only. There were thousands of ballots that just had the perfect bubble marked for Biden and no markings in the rest of the ballot.”

Another witness, an election recount monitor at the Georgia World Congress Center, stated that he observed “large quantities of ballots being cast for Joe Biden on ballots that did not appear to have been mailed.” As he stated, “there were no creases in the mail-in ballots giving the impression that they were never folded into an envelope and mailed.”

In particular, this recount monitor stated that these ballots “appeared to be pre-printed with the selections already made.” He noted that “hundreds of ballots at a time were counted for Biden only.”

Boxes of Ballots for Biden, Zero for Trump

Another certified Fulton County recount observer stated that during their observation process, “many of the boxes of ballots had voted 100% for Biden and 0% for Trump.” Similar to other observers, this one stated that the “ballots appeared to be perfectly filled out as if they were pre-printed with the presidential candidate selected.”

This observer stated that they, along with other observers, were disturbed enough to write down “which batch headers and box number ranges were suspicious” and went so far as to create a spreadsheet with a listing of the batch numbers.

A handwritten note on the side of the spreadsheet states, “All questionable ballots. Looked machine stamped. 95-100% Biden for most of them.”

Another election official auditor at the Georgia World Congress Center stated in a sworn statement that she observed the same pristine condition of ballots, noting the “absentee ballots looked as though they had just come from a fresh stack. I could not observe any creases in the ballots and did not seem like they were ever folded and put into envelopes or mailed out.”

Like the other observers, these ballots contained “perfectly bubbled markings for Biden.”

Another observer stated that all the military and overseas ballots that she reviewed were “very clean” and were “marked in black ink” and that “many batches went 100% for Biden.” The observer also noted that “the watermark on at least three ballots were solid gray instead of transparent,” which led the observer to state her belief that these ballots were “counterfeit.”

This matter was brought directly to the elections director who told the observer that the ballots were legitimate and the difference in markings was due to the “use of different printers.”

This observer also noted that “many ballots had markings for Biden only, and no markings on the rest of the ballot.” She stated that none of the Trump ballots were marked in the same fashion.

Lastly, this observer noted that the military ballots did “not have one specific precinct code on them” but instead had “multiple precincts printed” on them. The observer stated this created a situation where it was impossible to know which precinct the voter was registered in.

She closed by stating her belief, based on her observations coupled with the lack of signature verification, that “the military ballots are highly suspicious of fraud.”