The Republican State Leadership Committee (RSLC), an umbrella group for GOP state lawmakers and secretaries of state, launched an effort Wednesday to shore up election integrity.

The RSLC wrote in a Feb. 17 statement that the measure is meant to “restore the American people’s confidence in the integrity of their free and fair elections by convening leading policymakers to share and discuss voter-centric current laws and future reforms that make it easier to vote and harder to cheat.”

John Merrill, RSLC co-chair and Alabama’s Secretary of State, said that reforms are needed if Americans are to have confidence in their elections.

“While there is no one-size-fits-all solution to anything, every state in the nation should be working to assess and improve their respective election laws,” Merrill said.

“The good news is that states are truly the laboratories of democracy, and we can all learn from what others do well as we try to provide assistance to the leaders across the country that are spearheading the effort to reform our elections,” she said.

Key reform principles that will guide the commission’s work include ensuring voter roll accuracy and securing absentee and mail-in voting.

“Every eligible United States citizen who is a legal resident of their state and has properly registered, should be able to vote without any encumbrance and absentee and mail-in voting options should be encouraged,” the RSLC said. “States should, however, look to strengthen these methods through proper signature verification (matching signatures against voter registration records, not ballot applications), photo ID submission, and timely ballot return requirements.”

Some of the controversies that swirled around the 2020 election include claims that state officials and judges made changes that weakened security around mail-in balloting in violation of state election laws, which are the domain of state legislatures. 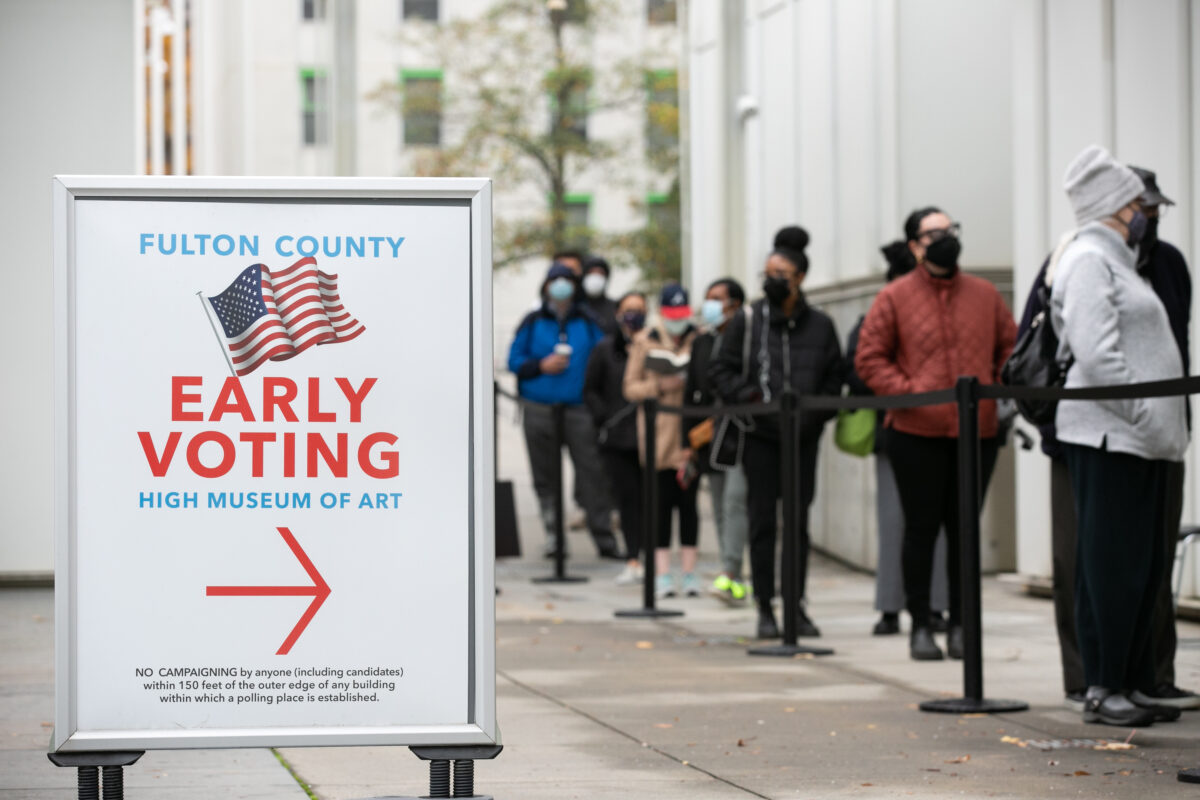 Voters line up for the first day of early voting outside of the High Museum polling station in Atlanta, Georgia on Dec. 14, 2020. (Jessica McGowan/Getty Images)

Other principles that the commission will use in its work on shoring up elections integrity include increasing transparency for in-person voting and streamlining the canvassing process.

“In-person voting should be an orderly and transparent process that provides citizens a recourse when they think the law is not being followed,” the RSLC said. “Giving Americans the tools to better scrutinize their elections will strengthen trust in the system and lead to more voter participation.”

A number of the contest-of-election lawsuits filed by former President Donald Trump and his allies in the wake of the Nov. 3 vote contained allegations that Republican poll watchers were denied meaningful access to observe various stages of vote tabulation.

But some moves to strengthen election integrity have been denounced as covert attempts at voter suppression, with The Washington Post running a recent editorial that argued, “nothing in the 2020 election experience suggests that wide-scale use of mail-in ballots, the provision of drop boxes or the rollout of automatic voter registration pose major risks to voting integrity.”

The Wall Street Journal ran an editorial on the RSLC initiative on Feb. 16, countering the view presented by The Post.

“As states reconsider their election rules in the wake of the pandemic, Democrats have begun shouting that voter suppression is on the march,” the editorial board wrote. “They stress ballot access but not ballot integrity. Both are important, as the Jimmy Carter-James Baker commission on federal election reform explained in 2005.”

“If the RSLC can deliver best practices, drawing from red and blue states and covering hot-button issues and mundane details like ballot preprocessing, it could give state lawmakers a good push in the right direction,” they argued.

Following the historic turnout and increased mail voting in 2020, Republican and Democrat lawmakers across the country have been pulling in opposite directions by introducing legislation that either reduces barriers—and guardrails—to voting, or seeks to strengthen election integrity, which can also make casting a vote more effortful or burdensome.

The Brennan Center for Justice, an advocacy group that pushes for progressive policies, counted 106 bills in 28 states designed to tighten voting standards so far this year, a significant jump from last year. At the same time, 35 states introduced a total of 406 bills to make voting less restrictive, also up from last year.