Rep. Fred Upton (R-Mich.) was censured for his vote weeks ago to remove Rep. Marjorie Taylor Greene (R-Ga.) from her committee assignments.

Michigan’s Cass County censured Upton for the vote, according to Upton in a series of Twitter posts on Tuesday evening.

Text of the resolution read: “We believe Congressman Upton’s vote is a betrayal of his oath of office and core values of the Cass County Republican Party. We believe this vote was not cast in accordance with the voice of the voters of Cass County and against our interest,” according to Newsweek.

“Tonight, the Cass County GOP censured me for voting to remove Marjorie Taylor Greene from the education committee, and in their resolution they stated that ‘her comments have not been out of line with anyone else’s comments.’ Really?” he wrote in response on Twitter.

On his Twitter page, Upton then listed alleged statements that Greene made on social media before she was sworn into office.

Other than Upton, 10 other Republicans voted to remove Greene from her assignments.

In January, after Greene’s social media posts came to light, House Democrats, along with some corporate media pundits, mounted a campaign against the Georgia lawmaker over comments she made on social media while attempting to tie her to the Qanon movement and the breach of the Capitol on Jan. 6. 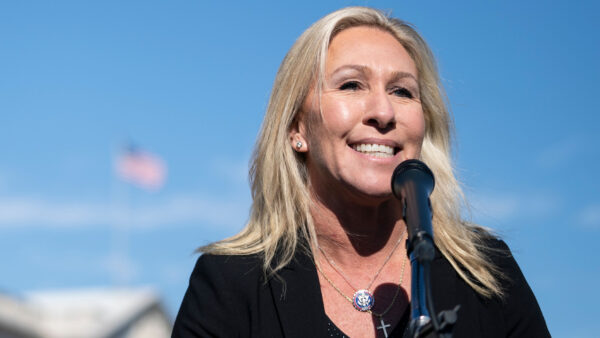 US Representative Marjorie Taylor Greene, Republican of Georgia, speaks during a press conference on Capitol Hill in Washington, on Feb. 5, 2021. (Alex Edelman/AFP via Getty Images)

Before the vote to strip her of her committee assignments, Greene appealed to her colleagues and distanced herself from the Qanon movement.

The move to censure Upton comes after he voted to impeach former President Donald Trump last month. House Democrats asserted that Trump was responsible for inciting a crowd at the Capitol on Jan. 6, while Trump and his lawyers denied the claims.

Republicans like Upton in House who voted to impeach Trump or voted to convict the president in the Senate have faced significant blowback from their constituents and local Republican Parties. Trump, as recent polls suggest, remains a very popular figure in the GOP.

Of the seven Republican senators to convict Trump, five of them have been censured. Maine’s GOP is reportedly slated to hold a meeting on whether Sen. Susan Collins (R-Maine) should be censured at the end of the month. Utah’s Republican Party issued a statement in early February saying that Sen. Mitt Romney (R-Utah) will not be censured, although a widely-circulating petition among Utah residents calls for him to be rebuked for his vote.

The Epoch Times has reached out to Cass County for additional details about the vote.