House Speaker Nancy Pelosi (D-Calif.) on Sunday excused Democrats who launched an investigation into possibly unseating an elected GOP House representative, explaining that the margin of victory was extremely slim.

Miller-Meeks was ultimately seated in Congress after votes were counted, recounted, and certified by the state. Several days ago, the House Administration Committee started a process that could lead to Miller-Meeks being unseated.

“It was six votes, and our candidate Rita Hart, the Democratic candidate asked for this process to begin,” Pelosi told ABC. “What the committee did, the House Administration Committee, was very narrow to take the process to the next step and see where it goes from there. An election of six votes out of 400,000 votes cast. This is not unique. This has happened, maybe even when you were in the Capitol before when races had been close one side or the others saying, let’s take it to the House.”

She said that former Supreme Court Justice Antonin Scalia “agreed that the House has the authority to seat members,” meaning that “we can count the votes.”

Several days prior to her interview, Pelosi told reporters in a press conference that overturning the election in favor of Hart is a “hypothetical” situation but later said it’s possible.

“Well, I respect the work of the committee,” the California Democrat said on March 12. “I did see, as you saw in the press, what they decided to—and they were following my, as I read it, the requirements of the law as to how you go forward. And how you go forward is the path you’re on and we’ll see where that takes us. But there could be a scenario to that extent. Yes.” 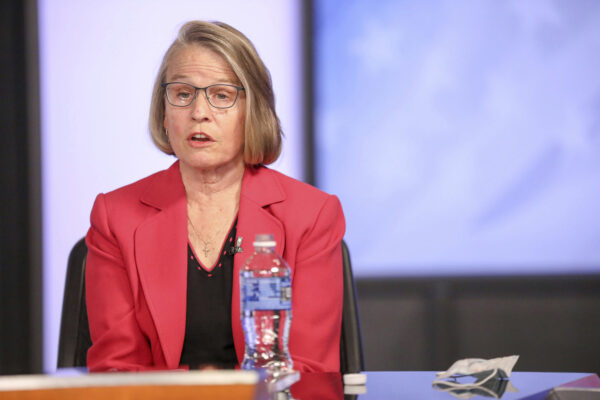 Mariannette Miller-Meeks answers a question during a debate in Cedar Rapids, Iowa, on Oct. 8, 2020. (Rebecca F. Miller/The Gazette via AP)

Pelosi, with her Sunday comment, appeared to be echoing a statement sent out by Rep. Zoe Lofgren (D-Calif.), the chair of the House Administration Committee, to her members saying that “the margin separating the two candidates was only six votes out of almost 400,000 cast: less than 1/6 of 1 percent. That’s six votes—not 6,000; not 600; not 60 or even 16—just six fewer votes than we have members of this committee.”

According to the Federal Contested Elections Act of 1969, the House has the ability to decide close congressional races on its own aside from the courts.

After the investigation was launched by the Democrat-led committee, Republicans cried foul.

Rep. Bryan Steil (R-Wis.) said that Miller-Meeks was declared the winner of the contest.

“Miller-Meeks has won the election, the majority of Iowa has fairly elected their representative. The Democratic majority in Washington should not stand in the way and delay this process any longer and spend taxpayer money on unnecessary legal fees,” he said.

15 Mar at 10:56 am
James Corbett Interview – COVID-19 Censorship, Technocracy & The Amazing Country Of Digital Gulag
If Article 4 Section 4 of the Constitution Was Enforced, Would We Have a Stolen Election, the Border Crisis or Antifa and BLM Burning Down Cities?