He continued, “What that is saying that anybody that believes the truth, just four months ago there was insurrection led by President Trump and many of his supporters. If you believe that somehow we can co-exist with a lie. You just can’t. Truth and lie cannot co-exist. There will always be shades of gray, but this is a place where there’s no shade. Unity can’t exist under those pretenses. So what they are saying if you don’t go along with the big lie or the fact that the election was stolen, then you basically need to go. That’s what that unity is.”

Kinzinger said, “Oh, keep in mind the CIA, no, the DOD attacked the CIA server farm supposedly in Germany as well as many other crazy things. How many? Five, probably, if that, maybe. I don’t know, but it’s in the single — it’s low. People don’t believe it, but what they are doing is sitting around saying, ‘I need to continue to exist in this job so that I can make an impact. I don’t have the courage or the strength or the ability to swing this party, so I’m going to put my head down and go along.’ Some people have made the decision that grabbing onto the Trump train again even though it has been derailed is the best way for us to push whatever, and some want to destroy the place.” 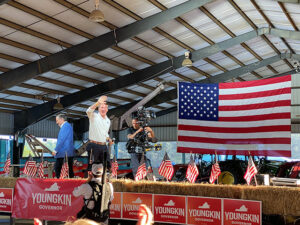