The emails obtained due to a Judicial Watch FOIA request show how Luntz, who is best friends and roommates with House Minority Leader Kevin McCarthy (R-CA), is used to manipulate the public perception of conservatives to suit the interests of the Radical Left.

Last year, the Whitmer administration utilized a PowerPoint presentation titled, “Changing the COVID Conversation,” prepared by Luntz’s group, the de Beaumont Foundation. They “tested specific words, sentences, phrases, and attributes Americans need to hear to change their behavior and stop the spread of the coronavirus,” and determined the best ways to dupe Republicans into supporting crippling and Draconian lockdown policies.

“Many Republicans refuse to follow guidelines because they argue the science keeps changing. It’s up to you to communicate – at the outset – that the science is settled,” Luntz warned the governor’s office.

Other nuggets of wisdom from Luntz included in the report are as follows:

“Nothing scares GOPers more than an IRS audit‚ except testing positive for COVID.”

”Despite vocal criticism from President Trump, President-elect Joe Biden was rewarded, not punished for “staying in his basement” for two months.”

”There are only two trusted organizations and people – the CDC and Dr. Anthony Fauci. No one else is close. And don’t forget to utilize survivors of Covid as well. Congress also lacks credibility.”

Big League Politics reported on the evisceration of Luntz by Fox News host Tucker Carlson after he was contracted following the election to tell GOP lawmakers what their constituents think:

“Year after year on issue after issue, the leadership of the Republican party fails to represent its voters, and we’re not guessing about that,” Carlson said.

He made it clear that Trump was elected because the GOP establishment was out of touch, but they have learned no lessons about why this happened.

“Luntz…is the Republican Party’s longest serving message man. For decades, Frank Luntz has told elected Republicans what to say and precisely how to say it. Luntz massages language for politicians,” Carlson said.

Carlson noted that Congressional Republicans invited Luntz to their recent retreat to receive his advice yet again on messaging.

Carlson explained Luntz’s ties to Big Pharma, shilling for oxycontin at a time when Purdue Pharma was deceiving the masses and creating an opioid crisis that America still has not recovered from.

Carlson brought up a damning old quote from a Luntz appearance on PBS in which he admitted to being a Big Pharma shill.

“I am a proponent of the pharmaceutical industry. I believe in these heart medications and these anti-cancer drugs. I’m a supporter of a very famous medication right now, OxyContin, because I think this is a miracle drug which allows people to get through the day,” Luntz said.

“I believe that there are things worth fighting for,” the left-wing pollster said about the addictive drugs produced by his corporate client.

Carlson noted that Luntz has been cited in lawsuits for allegedly helping Purdue Pharma devise ways to blame victims who had fallen into addiction to deflect blame from their aggressive and often deceitful advertising campaigns.

“So your 19-year-old just died of a drug O.D. after Purdue Pharma flooded your town with addictive narcotics, but stop complaining, it’s her fault she died! It’s about personal responsibility,” Carlson said, highlighting the disgusting and cruel implications of Luntz’s alleged strategy.“

Luntz represents the worst the political establishment has to offer. He is used by political whores of the Left and the Right to suppress the will of the people and should ultimately be remembered as a living, breathing symbol of America’s decline. 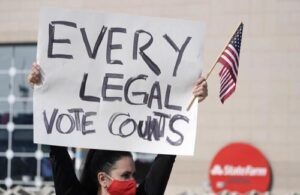