Lawmakers in Minnesota said late Monday they have filed a lawsuit to halt the certification of election results, alleging wrongdoing by Secretary of State Steve Simon.

“His office issued unlawful consent decrees that greatly affected the rules that govern absentee ballots and who can assist people at the polls. To circumvent the Minnesota Legislature and unilaterally change election law is entirely unconstitutional. This abuse of power must be addressed,” they added.

The lawmakers said they were joining with other legislators and candidates to file a lawsuit against Simon.

A search of federal courts didn’t show a new lawsuit against Simon.

The lawmakers are part of the New House Republican Caucus. Requests for the suit sent to Drazkowski and the caucus weren’t immediately returned.

The lawmakers said they were asking a court to suspend the certification of election results until certain issues were addressed. One of the issues, they said, was Simon’s alleged violation of the Equal Protection Clause of the Fourteenth Amendment through his rule that resulted in absentee, or mail-in, ballots being treated differently from county to county.

“Contrary to Steve Simon’s beliefs, only the Minnesota Legislature has the power to change election law. The secretary’s refusal to adhere to constitutional principles is an affront to free and fair elections. We intend to fix this mess,” they said.

A spokesperson for Simon said in a statement, “Neither our office nor our assigned attorney from the attorney general’s office has seen the lawsuit, but absent any order to the contrary, we’re proceeding with the statewide canvass tomorrow as planned.”

Minnesota’s state canvassing board is scheduled Tuesday to certify the election results. 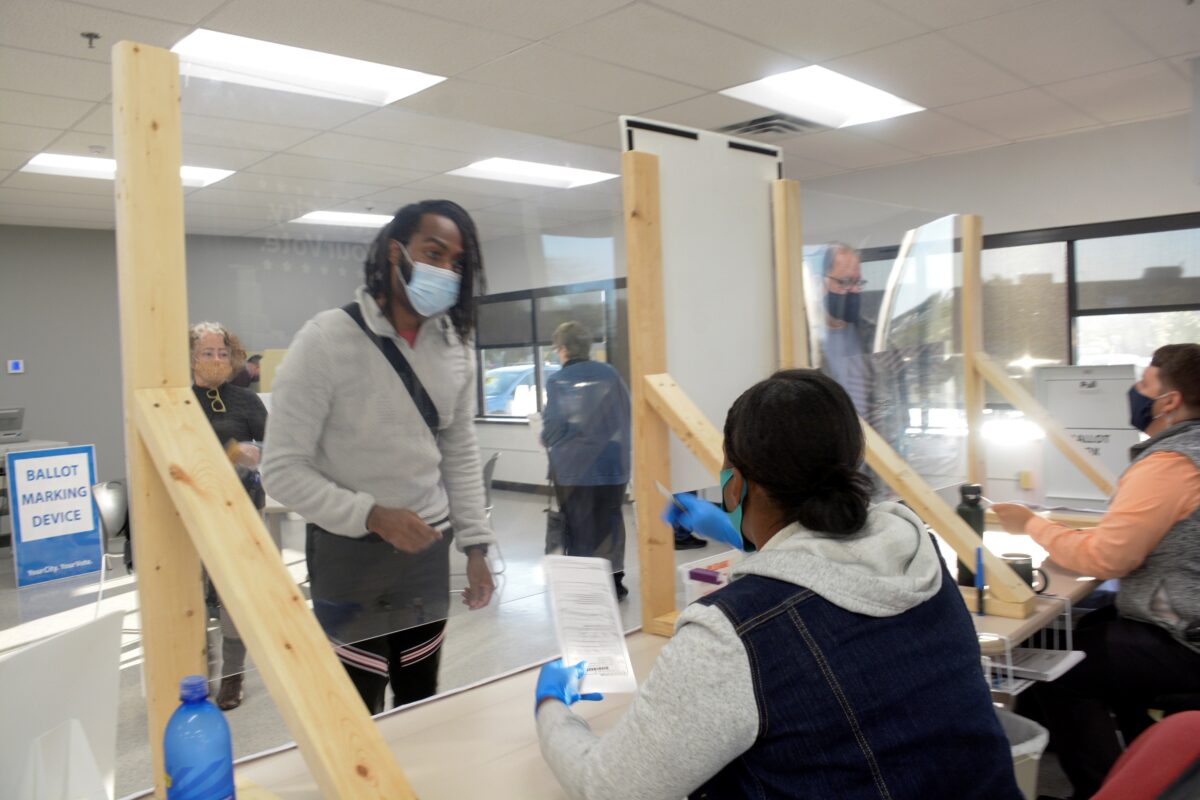 A voter talks to poll workers as he receives his ballot during early voting in Minneapolis, Minn., on Sept. 18, 2020. (Julio Cesar Chavez/Reuters)

The board is made up of Simon and four judges that he appoints: two state Supreme Court justices, and two district court judges. The four judges currently on the board were all appointed to their positions by former Democratic Gov. Mark Dayton.

Board members will review the results from each of the 87 county canvassing boards.

A lawsuit filed earlier this year against Simon alleged a consent decree he agreed to with the Minnesota Alliance for Retired Americans Education Fund and some of its members that extended the deadline for mail-in ballots likely violated the Constitution.

The extension “likely violates Article II, Section 1 of the Constitution because the secretary extended the deadline for receipt of ballots without legislative authorization,” a panel on the U.S. Court of Appeals for the Eighth Circuit ruled.

State Rep. Eric Lucero, a Republican who filed the suit, said, “The court was clear: ‘There is no pandemic exception to the Constitution.’”

“Secretary of State Steve Simon’s decision earlier this year to agree to count un-postmarked ballots arriving up to a week after Election Day eroded confidence in our elections and opens the door to fraud and abuse,” he added.

The panel ordered Simon and other election officials to separate all mail-in ballots received after the deadlines in case a court issues a ruling finding them “invalid or unlawfully counted.”

Simon said he would do so but that the state would count the ballots unless a court said not to count them. “We need to emphasize that there is no court ruling yet saying those ballots are invalid,” he said in a statement.