69 percent of likely black voters support voter ID laws while 75 percent of the general public supports these laws. Only 21 percent of voters disapprove of these laws meant to protect election integrity.

As of right now, 36 states have passed some sort of a voter ID law. After the fiasco that was the 2020 presidential election, states are working on tightening their existing voter ID laws or enacting ones that will prevent grotesque fraud from occurring.

Kemp is signing the law after becoming a lightning rod of criticism for many Trump supporters, with members of his own party blaming him for what they say was a lack of transparency and alleged election fraud in the 2020 presidential election. Joe Biden ultimately won the traditionally red state by 12,000 votes.

Georgia will now require a photo ID to vote absentee by mail. Not everyone will be eligible to request a mail-in ballot in upcoming state elections, with the state having adopted universal mail-in electioneering during the previous election.

The state election overhaul passed the Georgia State House 100-75, with the Georgia Senate accepting changes made to the omnibus-style legislation later Thursday 34-20.“

The public understands that the election system in America is broken, and Republicans should proceed boldly with reforms regardless of any nonsense from the Democrats and the fake news media. 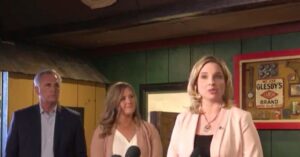 Hinson: Votes Have Been Recounted and Certified, 'Over and Over Again the Result is the Same'