Pence Declined to Back Plan to Overturn Election Results: Lawyers

Vice President Mike Pence would not confirm he is behind a plan that would see him throw out electors from states that went for Democratic presidential nominee Joe Biden, lawyers said late Monday.

Rep. Louie Gohmert (R-Texas) and a host of others, including Republican electors in Arizona, filed a lawsuit against Pence this week, asking a court to give Pence “exclusive authority” to decide which Electoral College votes should be counted during the upcoming joint session of Congress.

In a new filing asking for an accelerated schedule in the case, plaintiffs said that before the lawsuit was filed their counsel presented a written statement summarizing their arguments by email to Pence’s office.

“Plaintiffs’ counsel conferred via telephone with the Counsel to the Vice President and provided an as-filed copy of the Complaint and an unsigned final copy of Plaintiffs Motion via email,” the new filing states.

“In the teleconference, Plaintiffs’ counsel made a meaningful attempt to resolve the underlying legal issues by agreement, including advising the Vice President’s counsel that Plaintiffs intended to seek immediate injunctive relief in the event the parties did not agree. Those discussions were not successful in reaching an agreement and this lawsuit was filed. Counsel for the Vice President was promptly furnished a copy of the Complaint and Plaintiffs Motion.”

The case revolves around Pence’s role as president of the Senate. Like Biden in 2017, Pence will preside over the counting of electoral votes during the joint session of Congress next month. 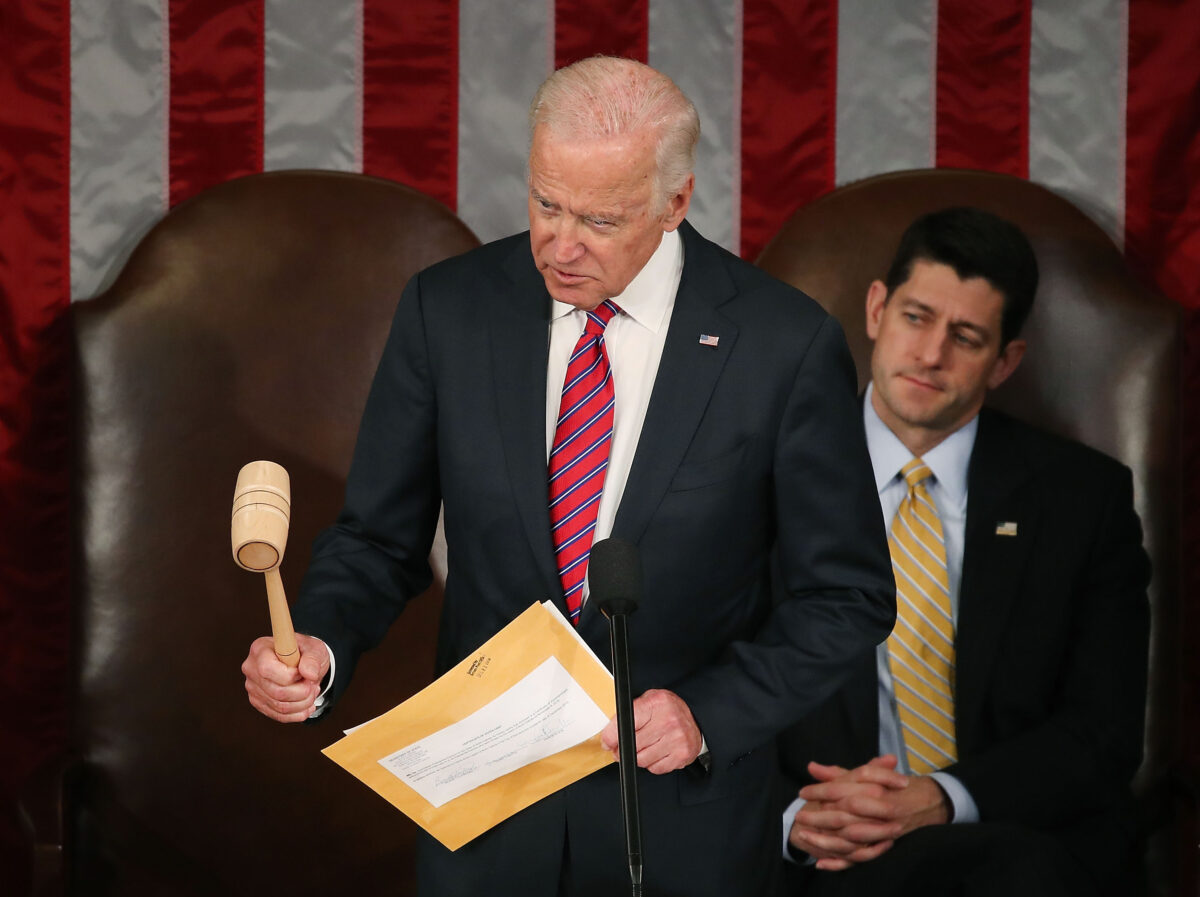 Then-Vice President Joe Biden presides over the counting of electoral votes during a joint session of Congress in Washington on Jan. 6, 2017. (Mark Wilson/Getty Images)

Usually, the only slate of electors presented to the joint session is for the candidate who won the most votes in a state. This year, there are seven alternate slates who voted for Trump in states that Biden was declared the winner. Republicans allege Trump actually won those states, citing allegations of election fraud.

Gohmert is among the dozen or so House members planning on challenging electoral votes during the joint session on Jan. 6, 2021. At least one senator is needed to sustain a challenge, but no senators have thus far committed to objecting.

Gohmert and the other plaintiffs argue that the U.S. Constitution clearly outlines protocol for when alternate slates of electors are presented to the president of the Senate. They say he has “exclusive authority and sole discretion under the 12th Amendment to determine which slates of electors for a state, or neither, may be counted.”

The power of the vice president to count or reject electoral votes is disputed.

The plaintiffs asked for a faster schedule because the joint session will happen soon. They also asked the court to issue a declaratory judgement finding that sections of the Electoral Count Act are unconstitutional because they violate the 12th Amendment, and that Pence has the authority and discretion in deciding between competing slates of electors, or throwing both out.

Lawyers for the plaintiffs met with lawyers for Pence in a conference of counsel to try to agree on the scheduling of Pence’s response, but the government’s lawyers sought a delay, according to the plaintiffs’ lawyers.

Justice of the peace, 3 others arrested on 150 counts of voter fraud in Texas

Justice of the Peace, 3 Others Arrested on 150 Counts of Voter Fraud in Texas