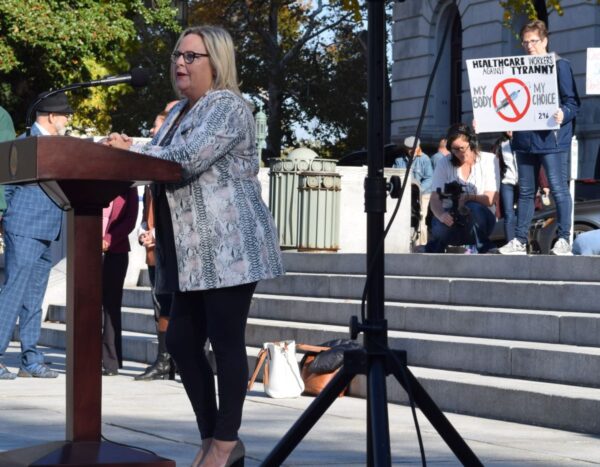 HARRISBURG, Pennsylvania—Hundreds of health care workers gathered on the Pennsylvania Capitol steps Tuesday to protest COVID-19 vaccine mandates. Some had already lost their jobs; others face deadlines and uncertainty.

Get fully vaccinated by a certain date or expect to be fired, their employers say, in an effort to comply with President Joe Biden’s national vaccine mandate.  Some employers will offer weekly COVID testing, based on most recent federal guidlines.

The rally was organized by Wellspan Health workers, but employees from other medical organizations also attended.

“We’re going to fight for you as we have the past two years,” Republican state Sen. Doug Mastriano told rally attendees. “Stay strong. I know there is a lot at risk. I know the left is merciless in their condemnations and judgements. They stand in judgement with anyone who disagrees with them, but if we stand together united, we can change history.”

A number of lawmakers spoke.

“These mandates will cripple many industries. Especially health care workers and nursing home industries. Our country will be in crises,” Republican state Sen. Judy Ward told the crowd. “I have heard from an overwhelming number of constituents on the desire to have medical freedom. That is why I stand with you today, to be a voice against medical tyranny. We are not telling people not to get the vaccine. We encourage people to make whatever choice makes them the most comfortable and is the right fit for their situation.”

Republican state Rep. Stephanie Borowicz announced that the Medical Freedom Act, Senate Bill 471, was passed out of committee Monday. The measure, introduced by Mastriano, prohibits a mandatory COVID-19 vaccination on Pennsylvania residents by the Commonwealth, political subdivisions, or as a condition of employment. Borowicz said it is a sad day when citizens have to fight for medical freedom in America.

“Last year it was the shutdowns. This year it’s mandates. So, it’s just tyranny in another form,” Borowicz said. “I saw the perfect sign yesterday. It said ‘We aren’t forcing you. We are just taking away everything else until you consent.’ Well, we will not comply. We will not be forced in America. Our health care workers who last year were heroes, are now losing their jobs. At no time in history, have the people that have been forcing others into compliance been the good guys. Those using coercion and force are never on the right side of history.”

She read a letter from a constituent with 11 years in the health care industry who lost her job on Nov. 5 after refusing to get a vaccine. The woman was expecting a baby and requested a medical exemption, but she wanted to wait until after the baby is born to get vaccinated. Her request was denied, she was considered non-compliant, and her job was over.

“It is time to get in this fight for medical freedom,” Borowicz said.

Mastriano reminded the crowd that while a pregnant mother lost her job for protecting her baby, last year during the shutdowns, Governor Tom Wolf declared abortion an essential service and kept abortion clinics open.

“These are times we call evil good, and good evil. We really do need to repent,” Mastriano said.

Adkins then listed many ways American rights have been curtailed since the start of the pandemic, including the right to free speech. He mentioned being placed in Facebook jail and that even his first name is considered hate speech in some places.

Adkins and some of his coworkers are waiting for religious exemptions from receiving the vaccine, and new rules for exemption approval dig into the freedom of religion.

Then there is the right to due process, which demands that individuals are treated fairly.

Beth Brelje is an investigative journalist covering Pennsylvania politics, courts, and the commonwealth’s most interesting and sometimes hidden news.

Send her your story ideas:

9 Nov at 6:32 pm
Pennsylvania
Democrats Take Back Conceding the Virginia House and Are Now Pushing for Recounts in Two Seats 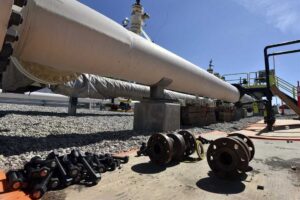