Peter Navarro Issues Report on Voting Irregularities: ‘The Emperor, In the Election, Has No Clothes’

Peter Navarro, who serves as an advisor to President Donald Trump, on Thursday released a report, in his private capacity, on the integrity of the 2020 election, concluding that the allegations of irregularities are serious enough to warrant an urgent probe and substantial enough to overturn the results.

The findings of the report (pdf), titled “The Immaculate Deception,” support the claim that the election “may well have been stolen” from President Donald Trump.

“If these election irregularities are not fully investigated prior to Inauguration Day and thereby effectively allowed to stand, this nation runs the very real risk of never being able to have a fair presidential election again,” Navarro said in the report.

On a call with reporters explaining his findings, Navarro said his role in putting the report together is to say that, “the emperor, in the election, has no clothes.”

Fielding questions about what, at this stage, can be done, given that numerous legal challenges brought by the Trump campaign have been dismissed and the Electoral College has already voted, Navarro said, “with every day that goes by, it becomes more complicated” and “options narrow.”

While Navarro declined to specify a proposed remedy in light of his findings aside from a thorough investigation, he said, “the last thing this country needs is an Inauguration Day where we have what is perceived to be an illegal and illegitimate president of the United States.”

In making an urgent call for a probe of the allegations, Navarro argued that “if, in fact, compelling evidence comes to light proving the election was indeed stolen after a fait accompli Biden inauguration, we as a country run the very real risk that the very center of our great American union will not hold.”

In the report, Navarro examines six types of irregularities in the six battleground states of Arizona, Georgia, Michigan, Nevada, Pennsylvania, and Wisconsin—states in which certified results show Democratic presidential candidate Joe Biden’s holding a lead and where the vote continues to be hotly contested. 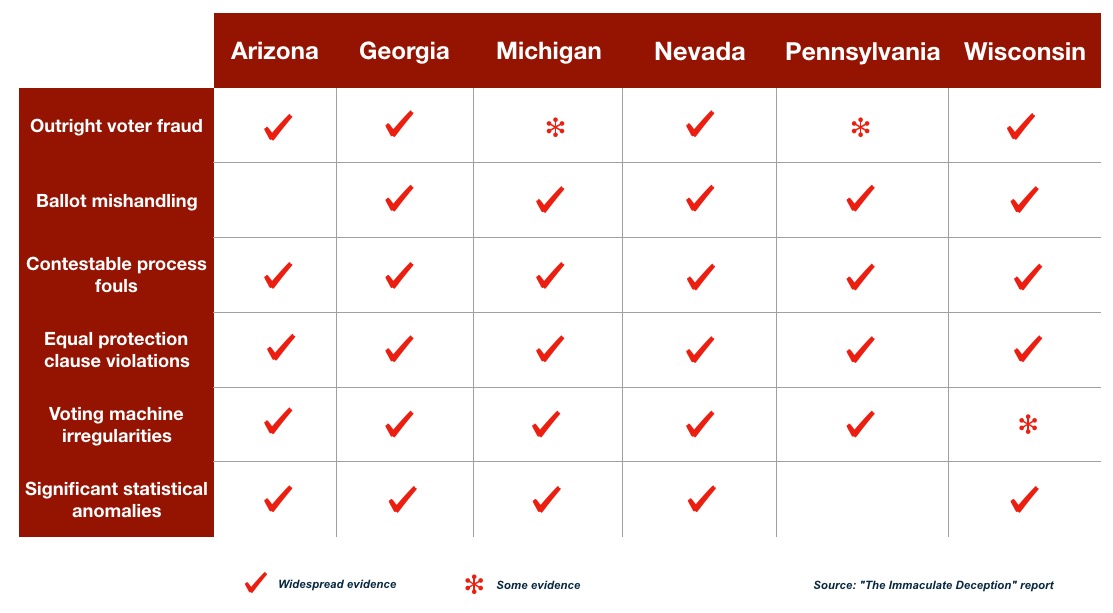 Navarro said that the pattern of irregularities across the six states suggests “a coordinated strategy to, if not steal the election outright, strategically game the election process in such a way as to ‘stuff the ballot box’ and unfairly tilt the playing field in favor of the Biden-Harris ticket.”

He argues that the weight of the evidence, which comes from sources that include over 50 lawsuits and judicial rulings, thousands of affidavits and declarations, testimony in a variety of settings, think tank analyses, and press reports, is “more than sufficient to swing the outcome in favor of President Trump.”

Biden’s margin of victory in all the battleground states except Michigan is less than the number of ballots that Navarro flags as possibly illegal.

Rather than any single “silver bullet” of election irregularity responsible for an unfavorable outcome for Trump, Navarro argues that “this was theft by a thousand cuts across six dimensions and six battleground states.”

The list of actions that Navarro classifies as outright voter fraud include large-scale manufacturing of fake ballots, bribery, along with ballots cast by dead voters or ineligible voters like felons and illegal aliens. Others include ballots counted multiple times and those cast by illegal, out-of state voters. 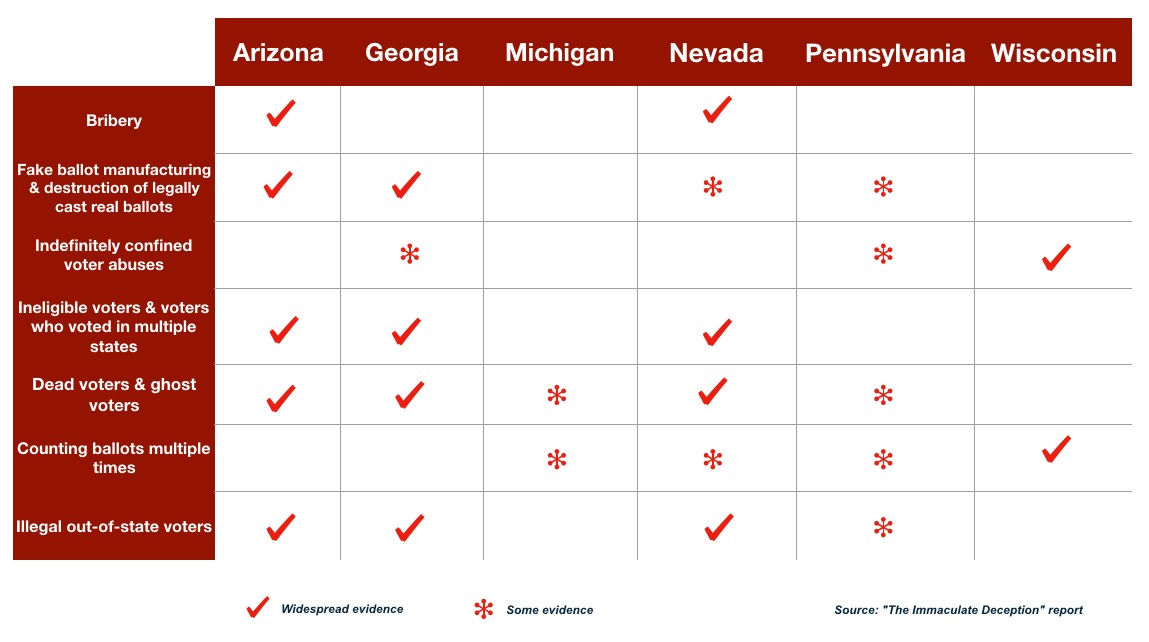 Another major dimension of alleged irregularities in the 2020 presidential election, which Navarro calls a “multifaceted problem” that featured in five out of six of the battleground states, includes such factors as no voter ID checks, signature match check abuses, “naked ballots” that lack an outer envelope, and broken chain-of-custody records. 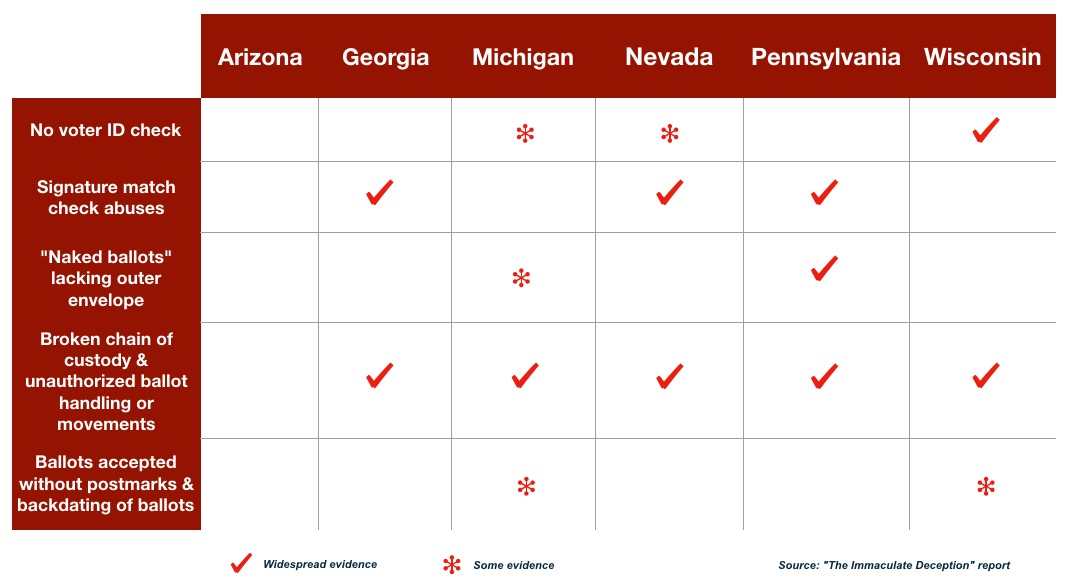 The third dimension of election irregularities includes abuses regarding poll watchers and observers, such as denial of access or lack of meaningful access, as well as violations of state law in the area of mail-in and absentee ballots. It also includes illegal ballot curing by poll workers, and violations in voter registration procedures. 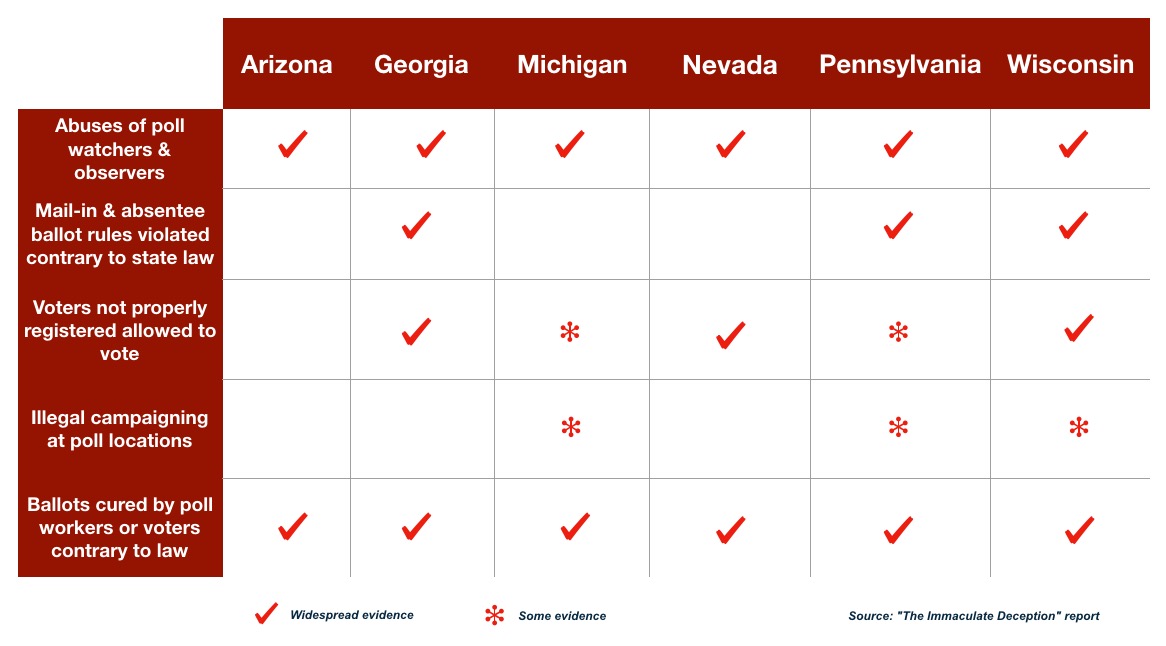 The 14th Amendment of the U.S. Constitution features the Equal Protection Clause, which mandates that no state may deny its citizens equal protection under the law. Questionable practices in this regard identified by Navarro include applying higher standards of certification and ID verification applied to in-person voters compared to mail-in and absentee balloting, and different standards of ballot curing for different counties. 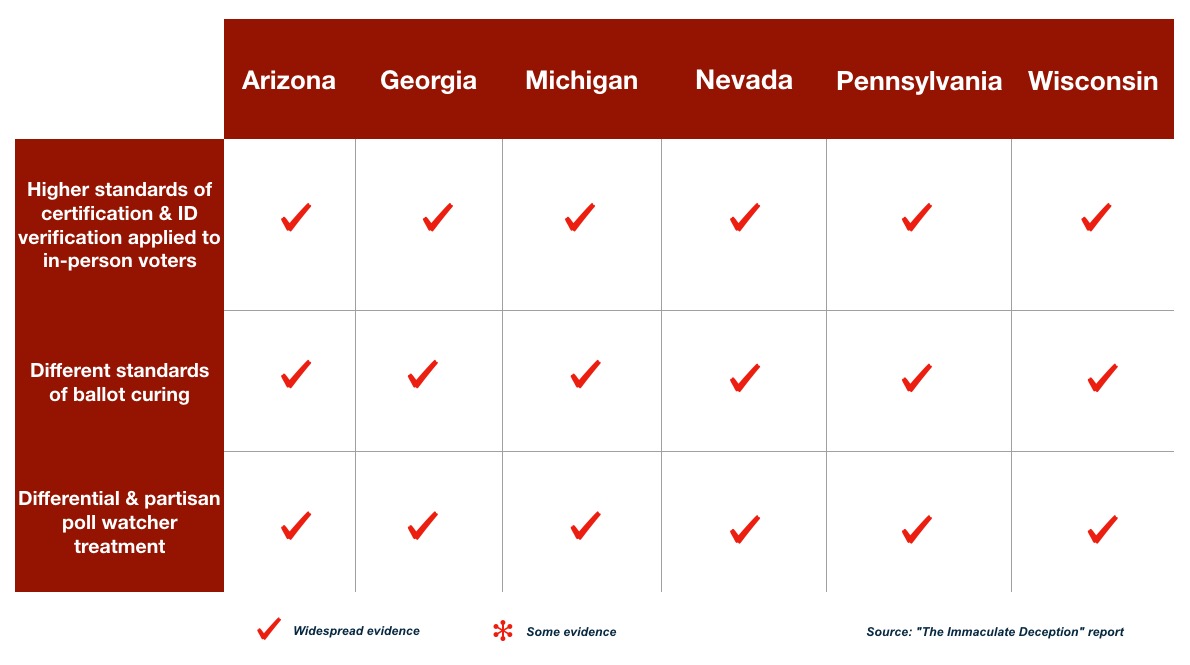 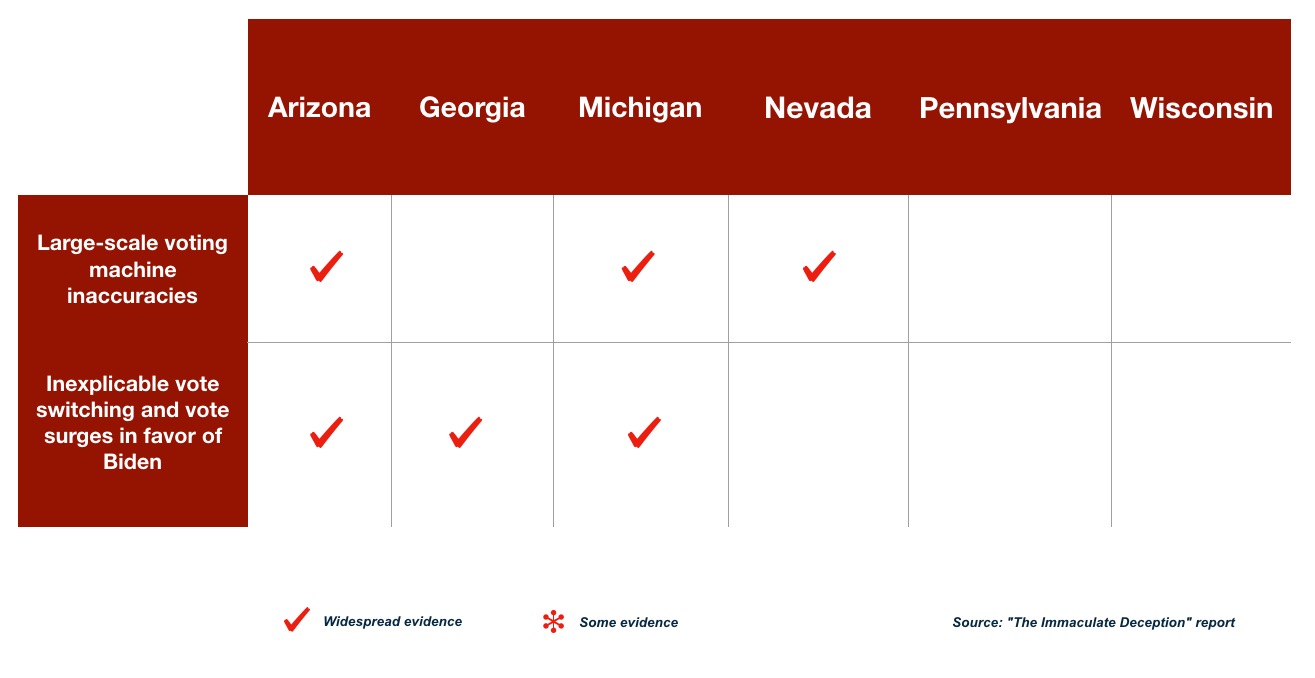 The final category of irregularities detailed in Navarro’s report are statistical anomalies, which include such phenomena as significant changes in absentee ballot rejection rates compared to prior elections, and unusual vote surges. 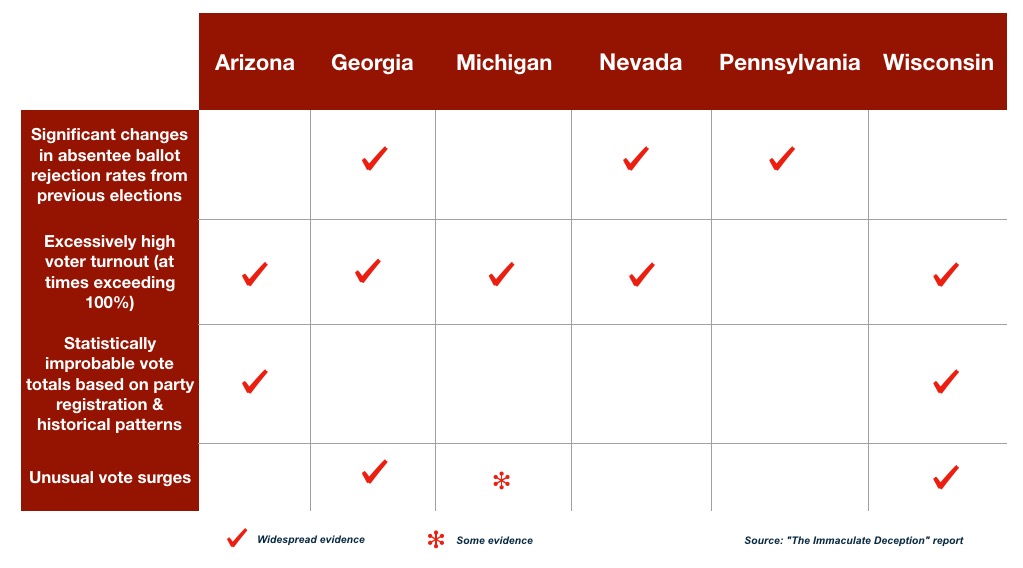 In concluding his report, Navarro argues that “the failure to aggressively and fully investigate” the irregularities he has flagged “signal a failure not just of our anti-Trump mainstream media and censoring social media but also of both our legislative and judicial branches.”

Since Election Day, Trump and third-party groups have pursued legal challenges to the outcome of the election in the six battleground states. None of the efforts have so far borne fruit, including an interstate Supreme Court challenge brought by Texas and backed by 19 Republican attorneys general.