A majority of Democratic voters broadly support the United States-Israel relationship, according to a poll that highlights a growing divide between the party’s radical anti-Israel flank and its more moderate members.

Around 65 percent of self-identified Democrats support the United States’s relationship with Israel either “strongly or somewhat,” according to a poll by Tipp Insights, which asked Americans about Israel in the wake of its latest conflict with the Iranian-backed Hamas terror group. Fifty-eight percent of self-described liberals expressed similarly positive views about the Jewish state. 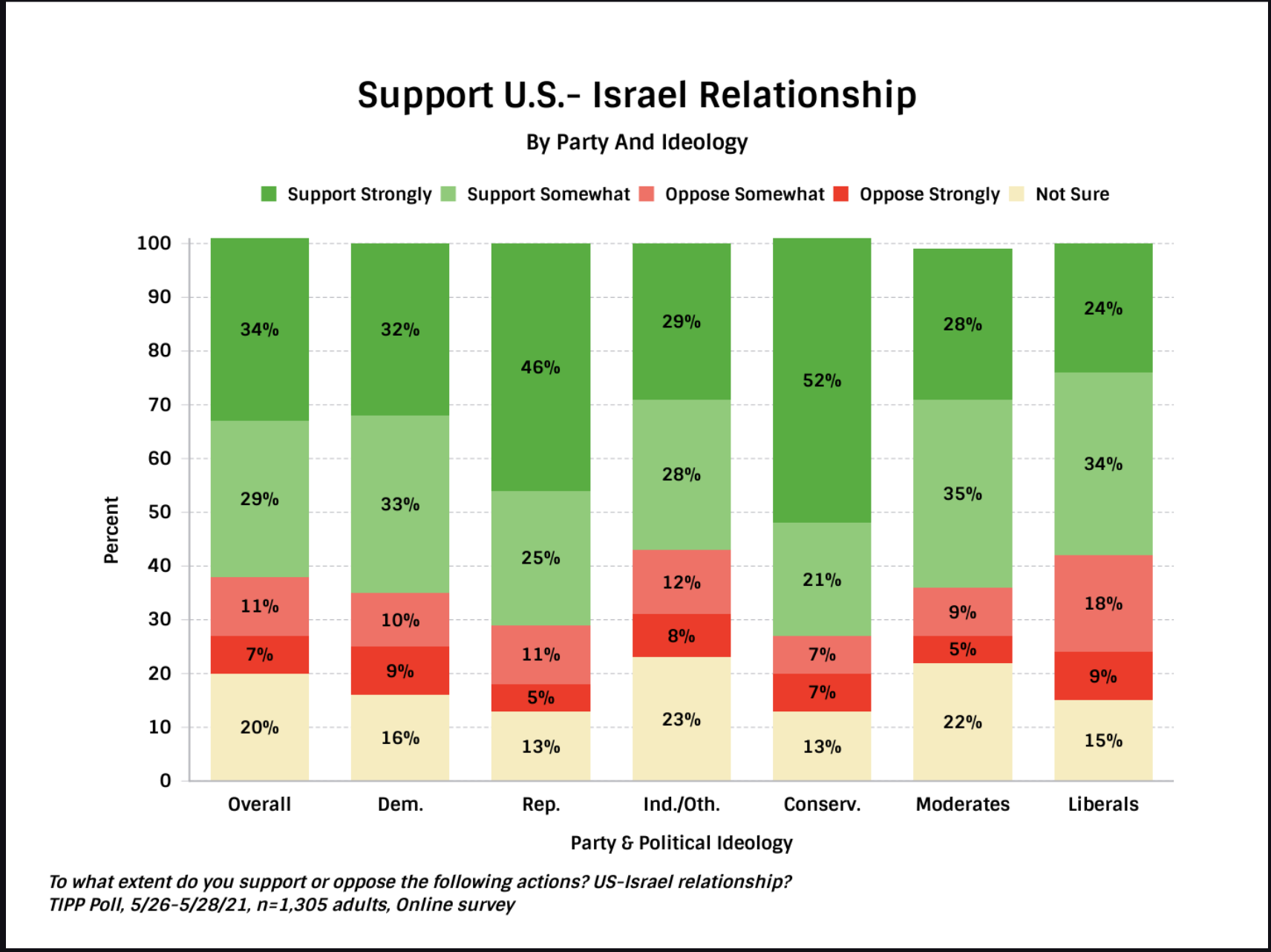 The findings indicate that as anti-Israel attitudes becoming increasingly prevalent in the Democrat-controlled Congress, the party’s voter base is not being swayed. As Israel fought its latest war with Hamas, Democratic lawmakers such as Reps. Rashida Tlaib (Mich.) and Ilhan Omar (Minn.) pressed the Biden administration to adopt stronger anti-Israel positions.

The poll’s findings show “solid numbers for a country frequently portrayed in the U.S. media as polarizing, and suggest that what opposition to the relationship there is among the American people is localized to specific Congressional districts, and would not be a successful platform for a state- or nation-wide election,” according to Victoria Coates, a former senior White House National Security Council official in the Trump administration. Coates analyzed the findings in a report published on the Tipp Insights website.

While voters from both parties and political ideologies broadly expressed support for the United States-Israel relationship, the matter of U.S. arms sales to Israel is more divisive.

The issue of arms sales “elicited the clearest partisan divide,” according to Coates, and may be a sign that far-left congressional Democrats’ efforts to politicize the United States-Israel security relationship are influencing general voters.

Half of Democratic voters also expressed support for sending U.S. aid to the Palestinians, even if those taxpayer dollars end up enriching a terror group like Hamas, according to the poll. Forty-seven percent of liberals shared this view.

Coates said the findings indicate that the Biden administration’s recent decision to restart U.S. aid to the Palestinian government is not as widely supported among Democrats as party leaders claim.

“Support for this aid is the weakest of all the questions polled, particularly in the ‘strongly support’ category while the ‘strongly oppose’ category is the largest of the survey, suggesting that this policy change may not enjoy broad support, even among Democrats who might be expected to back it,” she wrote. “As with opposition to the U.S.-Israel relationship, this survey indicates that support for aid to the Palestinians may well be a localized issue.”

Republicans largely oppose aid to the Palestinians, with 70 percent of those polled saying they somewhat or strongly oppose the aid.