MINNEAPOLIS, MN – A recent poll found that more white voters than black voters want to abolish the Minneapolis Police Department, according to a new poll conducted before early voting opened on an amendment to the city’s charter.

The poll, conducted September 9-13, was sponsored by the Star Tribune, MPR News, KARE 11 and FRONTLINE.

Following the death of George Floyd at the hands of former Minneapolis police officer Derek Chauvin in May 2020, calls by left-wing activists, Democratic leaders, and Black Lives Matter to defund the police department grew.

On September 17, 2021, early voting opened for the city’s November 2 Municipal Election. Voters are being asked to decide on a charter amendment that could change or replace the police department with a Department of Public safety.

The city cannot change the police department without changing the city charter, which must be approved by voters.

The charter amendment calls for the City Council to “establish, maintain, adequately fund, and consistently engage the public about a department of community safety and violence prevention.”

The ordinance also calls for a Division of Law Enforcement Services that would employ “peace officers,” among other measures.

The poll, conducted before early voting began, found that 49% of Minneapolis voters supported replacing the police department with some hybrid mix of police and public health representatives. 41% opposed changing the department, and 10% remain undecided.

According to a new poll, nearly half of Minneapolis voters and a majority of Black voters in the city support replacing the Minneapolis Police Department with a Department of Public Safety.

The poll was conducted by Mason-Dixon Polling & Strategy and questioned 800 likely voters. The poll had a +/- 3.5% margin of error.

Although male and female voters were equally divided on the issue of replacing the Minneapolis Police Department (MPD), race seemed to play a major factor in opinion. Contrary to most mainstream media narratives, white voters supported defunding the department by a much wider margin than black voters.

51% of white voters polled said they would support replacing the MPD with the proposed Department of Public Safety. Just 42% of black supported changing the police department.

The poll also found a vast difference of opinion between political parties. The poll found that 55% of Democratic voters supported replacing the MPD, as opposed to only 7% of Republican voters. However, 44% of independent voters supported the change.

“There’s no reason why we can’t achieve a lot of the same goals that amendment puts forth with the existing structure that we have. And that’s on the council.

“It’s going to take the right people in place within the council, within the mayor’s department.”

“You might as well try something new if what’s been there hasn’t been working. I mean, I appreciate the police. (But) a push towards something more.

“Something more cohesive, that addresses not just one problem, which is the crime, but it addresses the mental health issue.”

Interestingly, a majority of likely voters in Minneapolis do not want to see the police department reduced in size, although white voters again support the reduction more than black voters.

More white voters support reducing the size of the force than Black voters, but there was no majority among either demographic, 33% compared to 14%.

Republicans strongly objected to a reduction in the size of the department, with 79% say the department should not cut officers. Once again, despite mainstream media claims, more than half of Democrats (53%) and Independents (57%) agreed the force should not shrink in size.

Among black voters, 75% do not want the size of the Minneapolis police force to be reduced while 47% oppose the effort to replace the police department.
Poll: Mayor Frey, City Council approval ratings underwater https://t.co/O3rMpqaIuz

“I do not support this proposed charter amendment for a number of reasons: Number one, city council members did not do their job … in terms of pushing for police accountability and reform…

“They’re bypassing any possible reforms and going straight for dismantling the police without really having any input from the black community, particularly the people who are most impacted by the shootings and things that have happened in our community.”

The charter has been a challenge for city officials and supporters, and its wording was struck down once already by a Hennepin County District Judge.

Ruling on an injunction against the wording of the ballot by former City Council member Don Samuels, his wife, Sondra, and businessman Bruce Dachis, Judge Jamie Anderson wrote:

“The court finds that the current ballot language is vague, ambiguous and incapable of implementation, and is insufficient to identify the amendment clearly.

“It is unreasonable and misleading.”

The City Council revised the language and submitted the ballot minutes before the deadline for the printing of the ballots.

MINNEAPOLIS, MN- According to reports, Rep. Ilhan Omar (D-MN) railed against a judge’s recent decision to block a Minneapolis ballot measure that would replace the city’s current police department with a Depart of Public Safety.

During an in-person town hall meeting on Tuesday, September 14th, Omar blamed big money for thwarting a progressive measure that she argued would have given the city “flexibility” on how to “better” police the city. Omar said:

“The leaders who are opposed to progress in this city are not nameless or faceless. Using your network to obstruct the kind of progress so many people in this city want and were looking forward to is not something that should go unnoticed.”

“This ballot measure should be on the ballot. As you an tell, I’m pretty upset about it. We have people pouring in so much money to make us enslaved to a charter that the majority of us [oppose]. This is the opposite of what democracy should produce.

The people had a vision for what they wanted, and there’s a judge, there’s a mayor, there is a police chief, and their monied friends who are telling us we can’t have a city that is flexible to our needs and to our demands. How else are we supposed to make progress if we can’t do that?”

On Tuesday, September 14th, Hennepin County District Judge Jamie Anderson struck down Question 2 on the Minneapolis ballot for the November 2nd election, saying the wording was “unreasonable and misleading.”

“Include licensed peace officers (police officers) if necessary, with administrative authority to be consistent with other city departments to fulfill its responsibilities for public safety.”

In an op-ed for the Star Tribune on August 31st, Omar argued that the measure was a necessary step in ending police brutality and making communities safer. She wrote:

“The truth is the current system hasn’t been serving our city for a long time. I have long said we need a public safety system that is actually rooted in people’s basic human needs.”

“Fundamentally, communities across [Minneapolis] need & want the possibility for reform & accountability, which the current Charter blocks by locking us into an outdate model for law enforcement and safety. They want to end the cycle in inaction.”

“This year the residents of [Minneapolis] have asked for and can take the first step of action on the ballot. As a resident of [Minneapolis] where George Floyd’s murder sparked a national call for real reform, I will vote Yes for greater public safety & more human rights for all. #Yes4Minneapolis.”

According to FEC records, Omar spent approximately $2,800 on personal security in the second quarter. However, her spending was overshadowed by Missouri’s Cori Bush, who spent nearly $70,000 of her campaign funds on personal security, in the two months between April 15 and June 28. 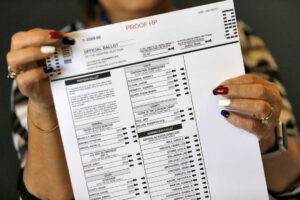