Poll: Most Voters Say Biden Is Not Mentally Fit to Be POTUS, Not in Good Health

From the moment President Joe Biden launched his campaign in April 2019, it was apparent he lacked the cognitive capacity he’d possessed throughout his long political career. Yes, he was well-known for making colossal gaffes, but he’d always been able to speak to people extemporaneously and fluidly.

In the two years he’d been out of the spotlight, his ability to communicate had diminished noticeably. He had begun to lose his train of thought and to stumble over and even slur his words. It wasn’t his age. We all know 90-year-olds who are as sharp as tacks.

The conservative media noticed the change immediately. The legacy media, of course, said questions about Biden’s health were just a right-wing media conspiracy theory. No one was willing to admit that Biden’s verbal struggles were a sign of his deteriorating mental health.

Instead of being concerned that the next leader of the free world might be slipping into dementia, they focused only on the hope that he could defeat that tyrant, then-President Donald Trump.

The foreign media, particularly the Australians, recognized what was happening.

SNL Skit in Real Life: The Awkward Moment VP Harris Gets Behind Podium to Speak and Announcer Says Wrong Name

In the clip below, Sky News Australia host Cory Bernardi told viewers, “Never before has the leader of the free world been so cognitively compromised. It is clear, to me at the least, that U.S. President Joe Biden is struggling with dementia and is clearly not up to the task he has been sworn in to do.”

Though some on the left remain in denial, two and a half years later, Biden’s condition has become too big for them to hide. Americans are seeing it too.

In a Politico/Morning Consult poll released on Wednesday morning, just 40 percent of voters said they believed or somewhat believed Biden “is in good health.” Fifty percent disagreed or somewhat disagreed.

Do you believe that Biden is slipping into dementia?

Politico reported “that 10-percentage-point gap — outside the poll’s margin of error — represents a massive 29-point shift since October 2020 when Morning Consult found voters believed Biden was in good health by a 19-point margin.”

Surprisingly, 46 percent of those surveyed said they believe the President is mentally fit, while 48 percent disagreed, a negative 2-point margin. The report pointed out that last October, voters believed Biden was mentally fit by a 21-point margin.

A look into the poll’s cross tabs shows the breakdown by political party and that is where the shift becomes extremely clear. Asked if they agreed that Biden is mentally fit, 78 percent of Democrats said yes and 16 percent disagreed.

And predictably, among Republicans, the numbers were 11 percent and 86 percent respectively.

The poll surveyed 1,998 registered voters and was conducted online between Nov. 13-15. The margin of error is plus or minus 2 percentage points.

Politico is most definitely a left-leaning media outlet. And although Morning Consult pretends that its polls contain no political bias, earlier this year, one of its writers described the bias of social media platforms like this: “The large social media platforms are not biased toward liberals or conservatives. Instead, they are private businesses trying — imperfectly — to keep harmful content off their platforms.”

Although large numbers of Democrats still either believe Biden is fine or simply refuse to admit that the emperor has no clothes, that swing in the margin from 21 points in October 2020 to negative 2 points in November 2021 shows that independents are aware of his decline. And they are the voters who matter the most.

How much more will voters see it one year from now?

Elizabeth is a contract writer at The Western Journal. Her articles have appeared on many conservative websites including RedState, Newsmax, The Federalist, Bongino.com, HotAir, Australian National Review, Independent Journal Review, Instapundit, MSN and RealClearPolitics.
Please follow Elizabeth on Twitter.

Elizabeth is a contract writer at The Western Journal. Her articles have appeared on many conservative websites including RedState, Newsmax, The Federalist, Bongino.com, Australian National Review, HotAir, Independent Journal Review, Instapundit, MSN and RealClearPolitics.
Please follow Elizabeth on Twitter. 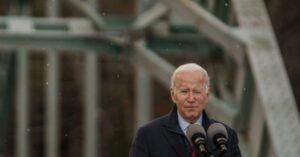