Rep. Louie Gohmert (R-Tx.), a lawyer and former judge, said Friday that a federal law is needed to protect election integrity by prohibiting counting of ballots received after the date of a federal election, with the exception of those cast by uniformed service members, their families, or overseas citizens.

Gohmert made the case for such a law in a Dec. 11 op-ed in Newsmax, in which he touted a bill he introduced in September, H.R. 8189, which amends the Help America Vote Act of 2002 by introducing measures to invalidate federal election ballots received after 12:01 a.m. on the day after the date of the election. Exempt would be votes cast by individuals entitled to vote by absentee ballot under the Uniformed and Overseas Citizens Absentee Voting Act.

“Without the federal prohibition established in H.R. 8189, it’s clear that political and corrupt state officials will shamelessly override the will of the people to unlawfully allow for fraudulent votes,” Gohmert wrote in the op-ed. “Due to Congress’ failure to act in anticipation of what has now come to fruition, the integrity of our elections is already in grave jeopardy.”

“Although we will not be able to avoid legal battles to right the wrongs that have already been perpetrated on the citizens who [cast] lawful votes in this election, Congress needs to abandon destruction of our Constitution by enacting H.R. 8189, and [do] so without further delay,” he argued.

Gohmert, in the op-ed, detailed a number of allegations made in statements under oath, attesting to illegal and fraudulent activities in the 2020 election. He also took aim at Pennsylvania for extending the deadline to receive ballots by three days. He argued the extension was made by state elections officials and the Pennsylvania Supreme Court in violation of the U.S. Constitution and state election laws.

“The most glaring problem with their decision is that neither the executive nor the judiciary in a state has the authority to change the law,” he wrote, and pointed to Article I, Section 4, Clause 1 of the U.S. Constitution, which states that, “The Times, Places and Manner of holding Elections for Senators and Representatives, shall be prescribed in each State by the Legislature thereof.”

“Therefore, by law and according to the U.S. Constitution, every single ballot received after 8 p.m. on Election Day is an illegal vote,” Gohmert argued. 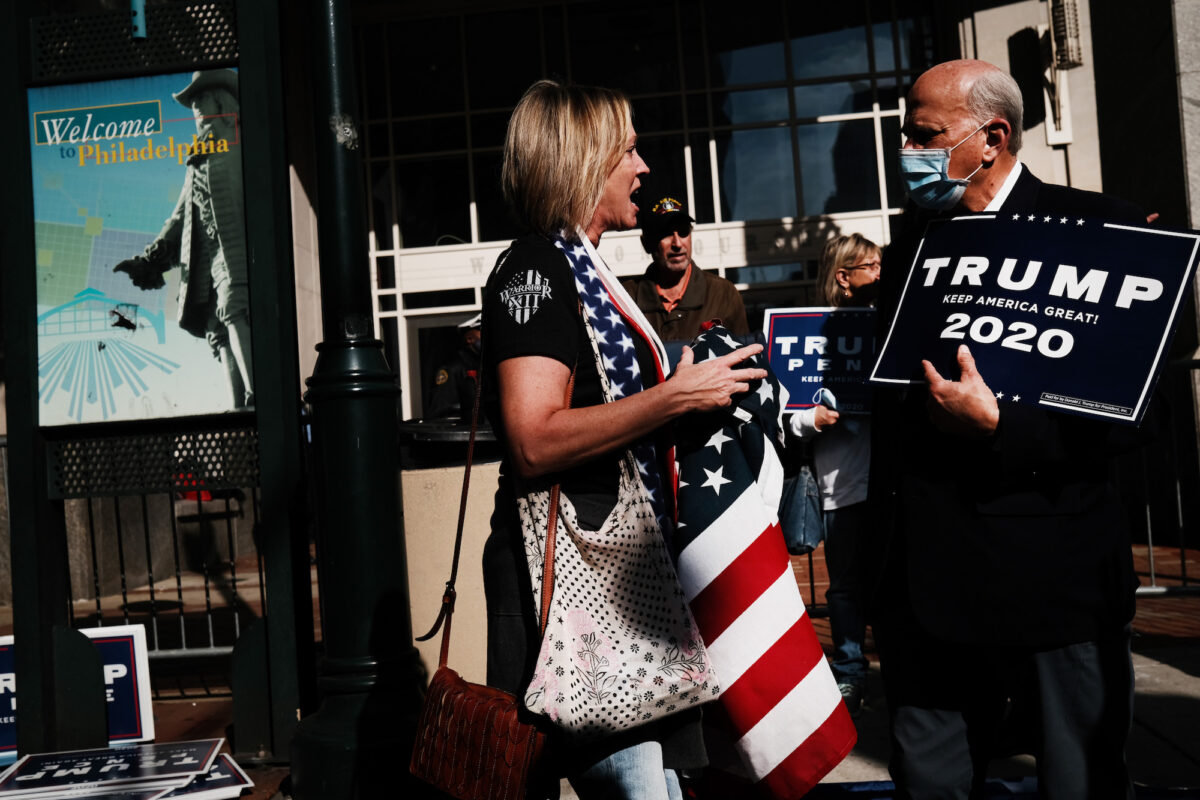 Rep. Louie Gohmert (R-Tx.) holds a Trump 2020 sign outside of the Philadelphia Convention Center as he speaks to a protester, in Philadelphia, Penn., on Nov. 06, 2020. (Spencer Platt/Getty Images)

Gohmert was one of 126 lawmakers to sign onto an amicus brief in support of a lawsuit brought to the U.S. Supreme Court by the state of Texas against four battleground states, including Pennsylvania. The suit claimed a number of unconstitutional irregularities in the 2020 election and asked the high court for a temporary restraining order on the four states to prevent them from certifying elections or allowing electors to be selected.

The Supreme Court on Friday rejected the lawsuit on grounds of a lack of standing.

“Texas has not demonstrated a judicially cognizable interest in the manner in which another State conducts its elections,” the order (pdf) read. “All other pending motions are dismissed as moot.”

President Donald Trump has a number of ongoing legal challenges in state and federal courts, while several lawsuits filed by third parties and attorney Sidney Powell are also proceeding through the judicial system.

The Epoch Times won’t declare a winner of the 2020 presidential election until all legal challenges are resolved.