Collins said in a statement that she would support Rep. Deb Haaland (D-N.M.) to lead the agency, saying, “Haaland promised to be bipartisan in her new role at the Department of the Interior, and I look forward to working with her.”

The announcement makes Haaland’s confirmation by the Senate nearly certain and follows last week’s endorsement of Haaland by Sen. Joe Manchin (D-W.Va.), who last month sparked uproar among his Democrat colleagues when he declared he would oppose Biden’s choice for budget director, Neera Tanden, who subsequently withdrew.

While Collins said that she and Haaland “certainly have differing views on some issues,” she touted Haaland’s support in the House for a conservation bill Collins co-sponsored, the Great American Outdoors Act, which authorizes nearly $3 billion on conservation projects, as well as maintenance of public lands, including national parks. 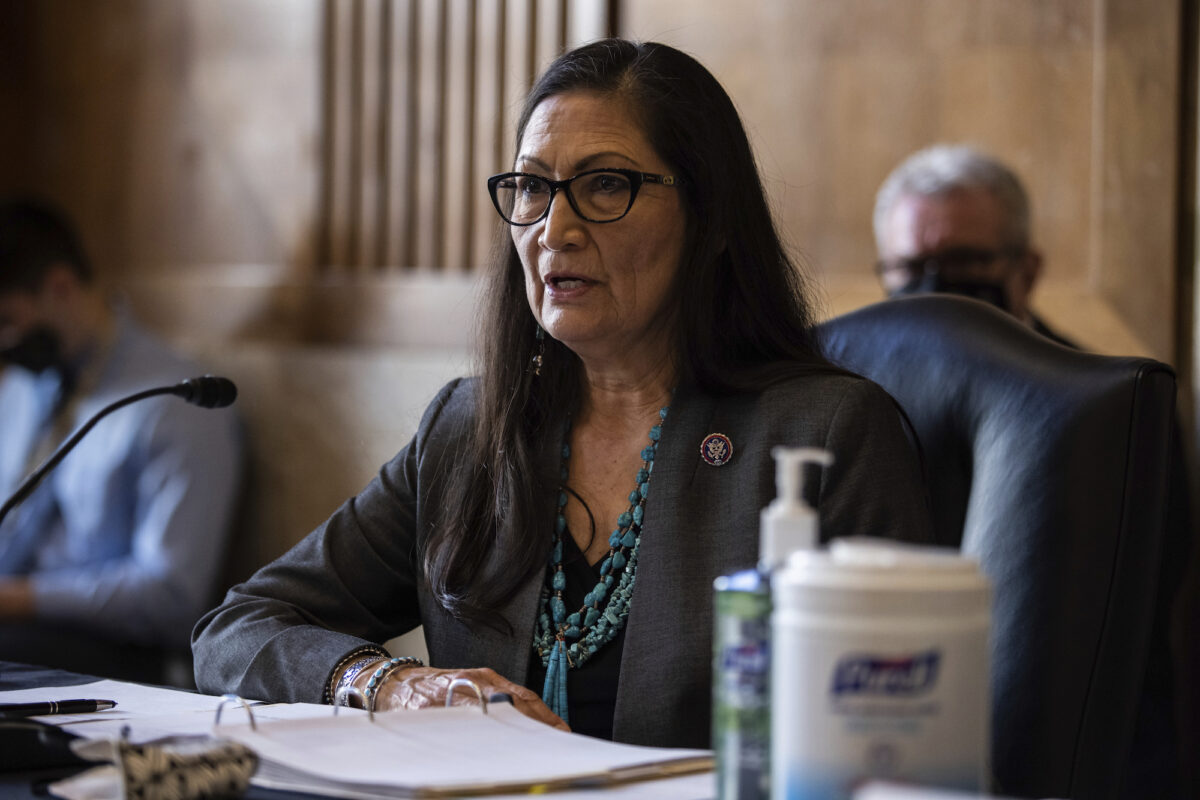 Rep. Deb Haaland (D-N.M.) speaks during a Senate hearing on her nomination to be interior secretary, on Capitol Hill, in Washington on Feb. 23, 2021. (Graeme Jennings/Pool via AP)

The Republican senator also praised Haaland’s support for issues of concern to her constituents in Maine, “as well as her deep knowledge of tribal issues, which has earned her the support of tribes across the country.”

Haaland’s confirmation would make her the first Native American to serve in a presidential Cabinet post.

Declarations of support from Collins and Manchin are key for Haaland in the 50-50 split Senate, providing some breathing room if any Democrats were to cast an opposing vote.

The Department of the Interior oversees the nation’s public lands and waters and leads relations with nearly 600 federally recognized tribes.

Under Biden, the department’s priorities are to “address the four intersecting challenges of COVID-19, economic recovery, racial equity, and climate change,” with acceleration of renewable energy development on public lands and waters one of the implementation objectives.

Haaland is on the record opposing fracking and the Keystone XL oil pipeline, leading some Republicans to come out against her candidacy, with Sen. John Barrasso (R-Wy.) among them.

Barrasso, who is the top GOP senator on energy matters, has denounced Biden’s moratorium on oil and gas leases on federal land and waters, arguing that it would cost thousands of jobs.

During Haaland’s confirmation hearings before the Senate energy and natural resources committee, Barrasso said he was “troubled by many of Representative Haaland’s views,” which he characterized as “radical.”

“We shouldn’t undermine our energy production and we shouldn’t hurt our own economy,” he said. “Representative Haaland’s positions are squarely at odds with the mission of the Department of [the] Interior.”

Sen. Steve Daines (R-Mont.) said he was “deeply concerned” by Haaland’s support for the Green New Deal and the pause on new oil and gas leases, as well as her opposition to Keystone XL.

Biden, in one of his first moves after taking office, revoked the permit for the pipeline, which former President Donald Trump revived after it stalled under the Obama administration.