Seven GOP senators on Saturday joined 50 Democrats in voting to convict former President Donald Trump on an article of impeachment, though the vote fell short and Trump was acquitted.

“I listened to the arguments on both sides I thought the arguments in favor of conviction were much stronger,” Toomey told reporters after the vote.

“Our Constitution and our country is more important than any one person. I voted to convict President Trump because he is guilty,” Cassidy, who has been censored by his party for his anti-Trump votes, added in a video statement.

Romney, a longtime Trump critic, said he carefully considered arguments from the House impeachment managers and Trump’s legal team before concluding the former president was guilty.

“President Trump incited the insurrection against Congress by using the power of his office to summon his supporters to Washington on January 6th and urging them to march on the Capitol during the counting of electoral votes. He did this despite the obvious and well known threats of violence that day,” he said.

Sen. John Thune (R-Wyo.), the Senate minority whip, told reporters that he wasn’t surprised by the number of Republicans who voted to convict. “I think most people staked out their positions earlier. So it was, I think kind of what most people expected,” he said.

Eight other Republicans had indicated they were open to convicting Trump or had not ruled it out, but ultimately voted to acquit. 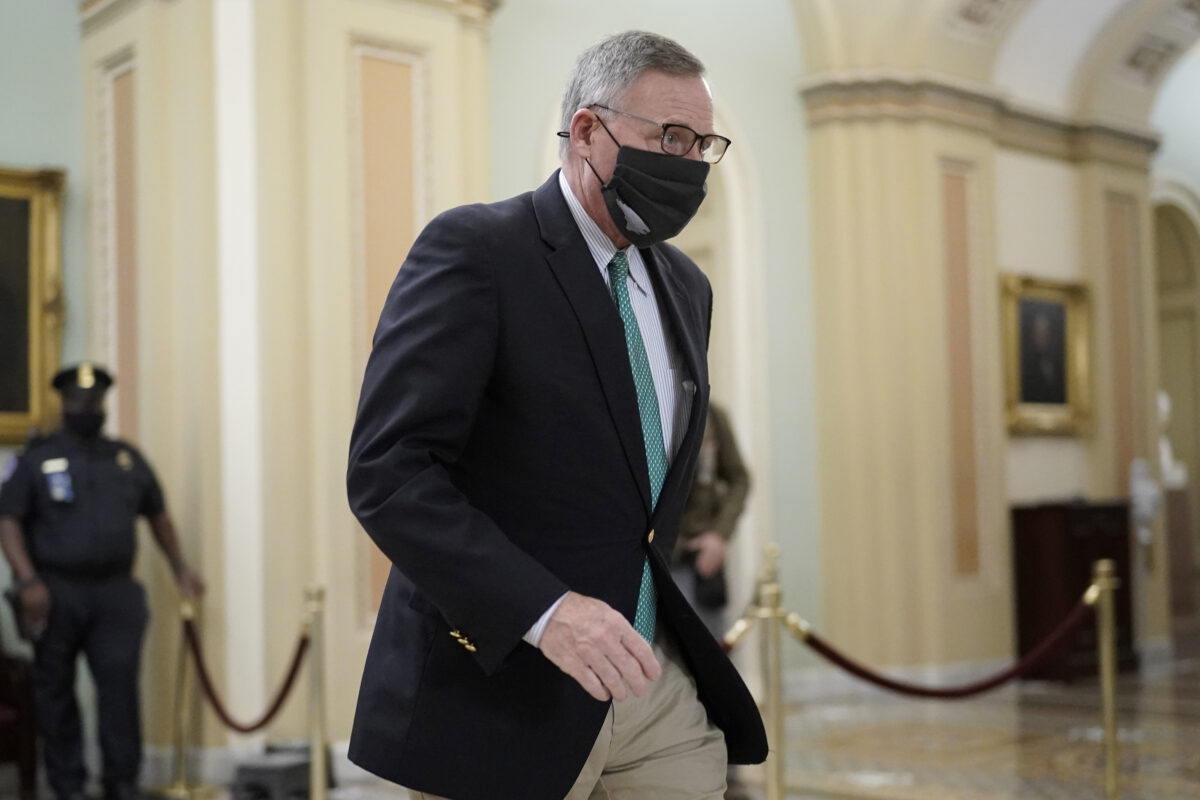 Sen. Richard Burr (R-N.C.) walks in the Capitol as the Senate proceeds in a rare weekend session for final arguments in the second impeachment trial of former President Donald Trump, at the Capitol in Washington on Feb. 13, 2021. (J. Scott Applewhite/AP Photo)

Nine Democrats had said they would wait until hearing presentations from both sides before deciding how to vote, while Sen. Kyrsten Sinema (D-Ariz.) had resisted attempts to clarify her stance. All 10 ended up voting to convict.

Trump “incited a violent insurrection against his own government because he did not like the outcome of a free and fair election,” Sinema said in a statement.

A conviction would have required a 67 vote supermajority.

The chamber is divided evenly between 50 Democrats and 50 Republicans after the Democrats won both Georgia runoff elections in January.

Republicans who voted to acquit highlighted their stance that the trial was unconstitutional because Trump is no longer in office. Some defended Trump against the incitement accusations.

“It remains true that Congress simply does not have the constitutional authority to impeach a former president. And rather than take its take time to hold hearings and assess all evidence, the House had a rushed impeachment process that denied President Trump due process,” Sen. Deb Fischer (R-Neb.) said.

“The House brought only one charge before the Senate: incitement. Donald Trump used heated language, but he did not urge anyone to commit acts of violence. The legal standard for incitement is very high and it is clear by the results of this vote that the House Managers failed to present a coherent standard for incitement,” added Sen. Ted Cruz (R-Texas).

13 Feb at 5:46 pm
Schumer Decries ‘Vote of Infamy’ After Failure to Marshal Republicans Against Trump
Senate Acquits Donald Trump, But SEVEN Republicans Voted with Democrats to Convict Him