Texas’ Republican Attorney General Ken Paxton on Tuesday filed an election lawsuit in the U.S. Supreme Court against Pennsylvania, Georgia, Michigan, and Wisconsin, alleging that the states used the pandemic to unlawfully change their election laws and urging the top court to have the election results declared unconstitutional.

Paxton argued in the filing (pdf) that the states used the outbreak of the CCP (Chinese Communist Party) virus as an excuse make non-legislative changes to their election rules “through executive fiat or friendly lawsuits, thereby weakening ballot integrity.”

He is requesting that the U.S. Supreme Court rules to prohibit the counting of the Electoral College votes cast by the four states and for those states that have already appointed electors, he asks the court to direct state legislatures to appoint new electors.

“While investigations into allegations of unlawful votes being counted and fraud continue, even the appearance of fraud in a close election would justify exercising the Court’s discretion to grant the motion,” Paxton argued, and called for the high court to extend the Dec. 14 deadline for certification of Electoral College electors “to allow these investigations to be completed.”

In seeking a determination by the court that the four battleground states conducted the 2020 election in violation of the Constitution, Paxton detailed actions taken by these states to modify election rules. 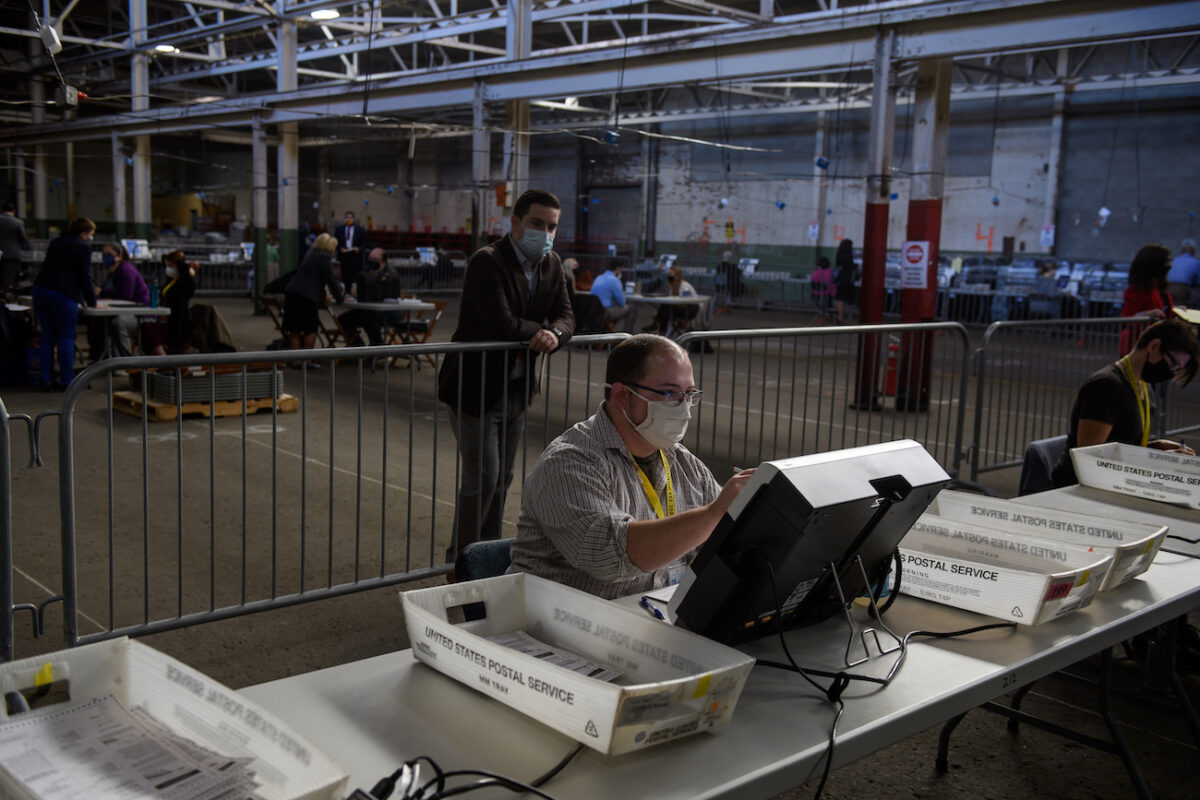 A poll watcher monitors the counting of ballots at the Allegheny County elections warehouse in Pittsburgh, Pennsylvania, on Nov. 6, 2020. (Jeff Swensen/Getty Images)

After several voter advocacy groups sued Boockvar in August claiming existing signature verification procedures for mail-in voting were unlawful, the Pennsylvania Department of State settled with the plaintiffs, issuing revised guidance stating, “The Pennsylvania Election Code does not authorize the county board of elections to set aside returned absentee or mail-in ballots based solely on signature analysis by the county board of elections.”

Paxton argues this move violated Pennsylvania law and that it “unconstitutionally did away with Pennsylvania’s statutory signature verification requirements.”

These claims mirror those made in an earlier lawsuit against Boockvar ahead of the election, with the Pennsylvania Supreme Court ruling unanimously to prohibit counties from rejecting a ballot if the voter’s signature on it does not resemble the signature on the voter’s registration form.

Another claim Paxton made in the complaint to the U.S. Supreme Court was that, while Pennsylvania’s state legislature enacted bipartisan election reforms in 2019 that set a deadline for receiving mail-in ballots for 8:00 pm on Election Day, the Pennsylvania Supreme Court later extended that deadline to three days after Election Day.

He also noted in the complaint that, prior to the election, Boockvar sent an email to local election officials urging them to provide opportunities to contact voters to “cure” defective mail-in ballots, which he said violated the state election code.

“This blatant disregard of statutory law renders all mail-in ballots constitutionally tainted and cannot form the basis for appointing or certifying Pennsylvania’s presidential electors to the Electoral College,” Paxton wrote in the complaint.

The Epoch Times reached out to Boockvar’s office with a request for comment, but did not receive an immediate reply.

Pennsylvania Attorney General Josh Shapiro, in a statement on Twitter, denounced Paxton’s complaint: “These continued attacks on our fair and free election system are beyond meritless, beyond reckless—they are a scheme by the President of the United States and some in the Republican party to disregard the will of the people—and name their own victors.”

“These factless, baseless ‘lawsuits’ to stir confusion and doubt in our systems are un-American and we should not allow this circus to continue,” Shapiro said in a separate statement.

The number of votes affected by the various alleged constitutional violations exceeds this margin, according to Paxton’s complaint. 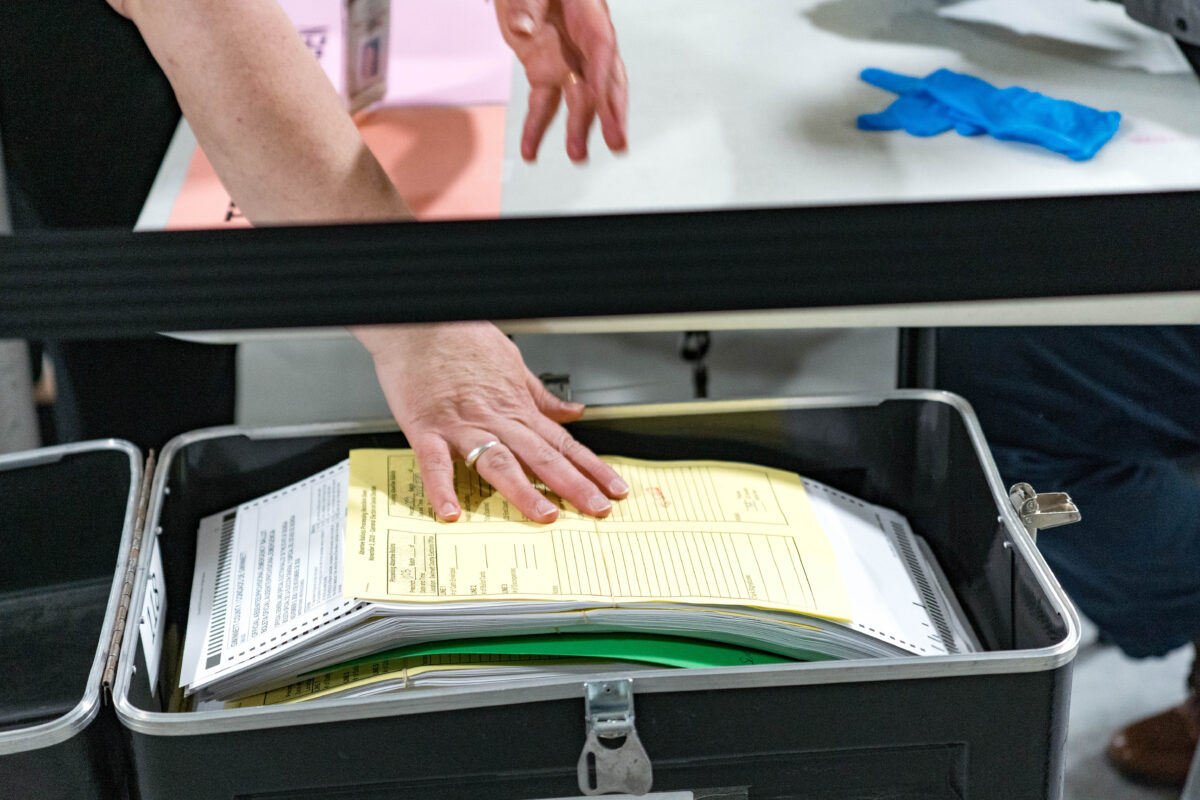 The statute prohibits the opening of absentee ballots until after polls open on Election Day, but in April the State Election Board adopted a rule issued by Raffensperger that authorized county election officials to begin processing ballots up to three weeks prior.

Another change Paxton objected to was an agreement Raffensperger entered into in settlement of a lawsuit brought against him by the Georgia Democratic Party, which changed the statutory signature verification requirements. The settlement made it more difficult to reject questionable ballots by requiring a registrar who suspected a defective signature to seek a review by two other registrars, a majority vote to discard the ballot, and additional obstacles like all three registrars having to sign their names on the rejected ballot and write down the reason for its rejection.

Paxton argued this change, which was not ratified by Georgia’s legislature, made it less likely to reject questionable ballots and “materially benefitted” Biden as the former vice president received nearly double the number of absentee ballots than Trump.

“The effect of this unconstitutional change in Georgia election law, which made it more likely that ballots without matching signatures would be counted, had a material impact on the outcome of the election,” Paxton wrote.

The Epoch Times reached out to Raffensperger’s office for comment, but did not receive an immediate reply.

According to certified results, Biden leads Trump in Georgia by over 12,000 votes. 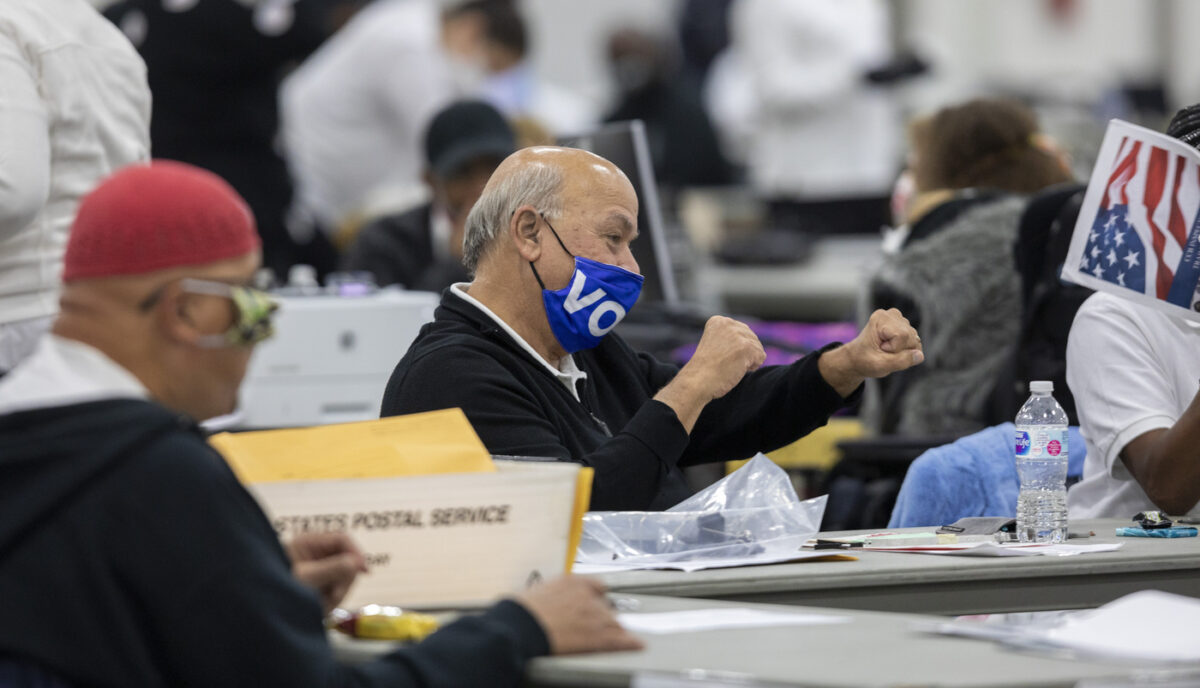 A worker with the Detroit Department of Elections celebrates after hearing the nearly final number of 167,000 absentee ballots that were counted is announced over the loudspeaker at the Central Counting Board in the TCF Center on Nov. 4. (Elaine Cromie/Getty Images)

While the Michigan constitution provides for “no excuse” mail-in voting, Benson announced in May that her office would send unsolicited absentee-voter applications by mail to all 7.7 million registered voters, in violation of Michigan Election Law, which does not give the Secretary of State the power to distribute absentee ballot applications, Paxton argued.

Moreover, Michigan law requires that applicants sign an absentee ballot application form, a rule that Paxton argued was violated when Benson launched a program in June that allowed absentee ballots to be requested online, without signature verification.

“These non-legislative modifications to Michigan’s election statutes resulted in a number of constitutionally tainted votes that far exceeds the margin of voters separating the candidates in Michigan,” Paxton contended.

According to Michigan’s certified results, Biden leads Trump by a margin of over 146,000 votes.

The Epoch Times reached out to Benson’s office for comment, but did not receive an immediate reply.

“The Michigan issues raised in this complaint have already been thoroughly litigated and roundly rejected in both state and federal courts—by judges appointed from both political parties,” she continued, adding that Paxton’s actions “are beneath the dignity of the office of Attorney General and the people of the great state of Texas.” 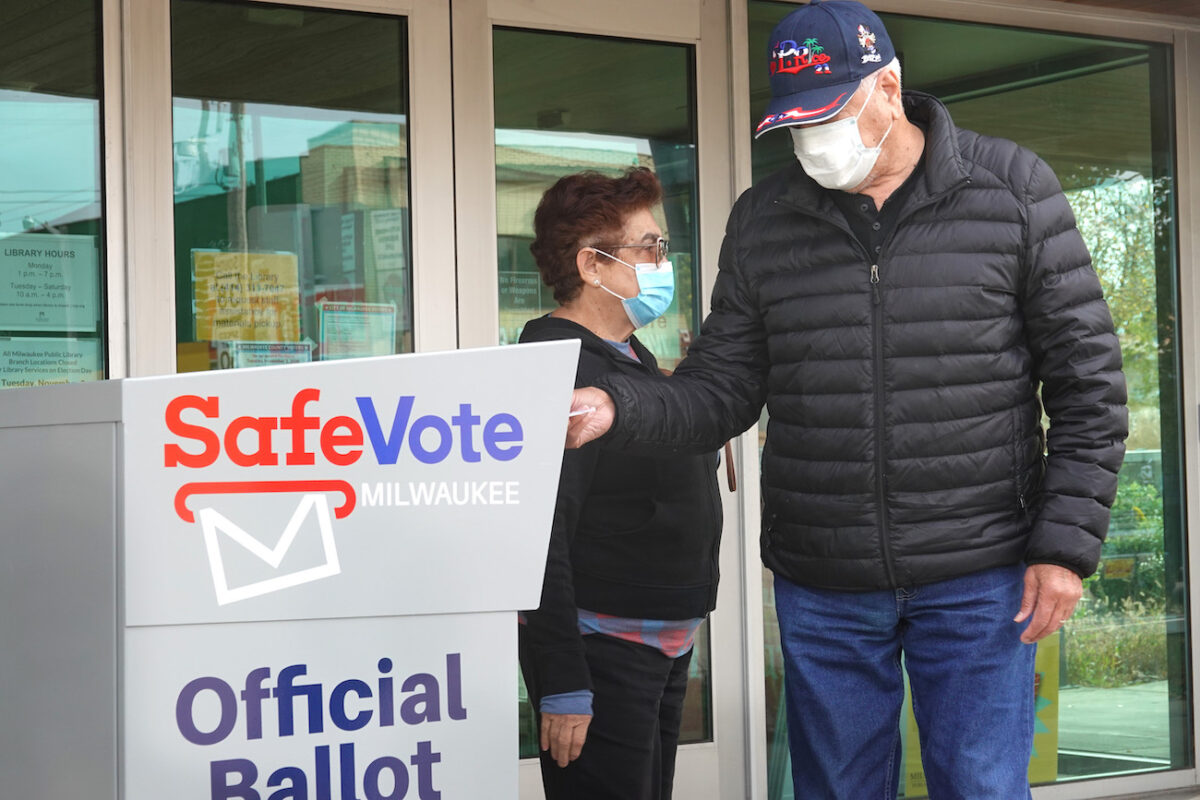 Residents drop mail-in ballots in a ballot box outside of the Tippecanoe branch library in Milwaukee, Wisconsin, on Oct. 20, 2020. (Scott Olson/Getty Images)

One of these modifications involved the establishment of hundreds of drop boxes to collect absentee ballots, including ones that were unmanned.

“However, the use on any drop box, manned or unmanned, is directly prohibited by Wisconsin statute,” Paxton argued.

He also alleged that the WEC and local election officials encouraged voters to unlawfully declare themselves “indefinitely confined” so that they could, under Wisconsin law, avoid security measures like photo ID requirements and signature verification when applying to vote absentee.

Paxton cited guidance issued by Dane County and Milwaukee County clerks indicating that all voters should mark themselves as “indefinitely confined” due to the pandemic.

Further, he cited a directive issued by WEC to Wisconsin clerks prohibiting removal of voters from the registry for indefinite-confinement status even if voters were no longer “indefinitely confined.”

He also alleged that the WEC issued guidance permitting clerks to add missing addresses from certifications on absentee ballots, in violation of Wisconsin election laws.

Certified results in Wisconsin put Biden ahead of Trump by a margin of over 20,000 votes.

The Epoch Times reached out to the WEC for comment but did not receive an immediate reply.

Paxton argued that the actions he outlined in his complaint “constitute non-legislative changes to State election law by executive-branch State election officials, or by judicial officials” and, as such, votes cast by Electoral College electors pursuant to these actions should not be considered constitutionally valid.

8 Dec 2020
Sidney Powell: CIA, mainstream media, globalists all part of a grand conspiracy to rig elections and defraud We the People
Wisconsin Lawmakers Seeking to Figure Out Whether Nov. 3 Election Was Fair and Accurate