After explosive video was presented during a Georgia state Senate hearing which clearly shows a handful of election workers in Atlanta waiting for observers and the press to leave, before producing several containers of ballots for a late-night vote-counting party, a group called Lead Stories published a “hoax alert” which falsely claims to have debunked the footage.

The “hoax alert” was peddled by the Washington Post, Newsweek and others – and among other things states that government officials told them that the ballots were in “containers — not suitcases,” and that “party observers were never told to leave because counting was over for the night.”

First – Party officials claim observers were never told that counting was over for the night.

That claim, which he has repeated consistently, is backed by sworn affidavits from two Republican observers, who further allege they were kept an unreasonable distance from the ballots even while they were at State Farm Arena, making it completely impossible to meaningfully do their jobs. (The video, which shows the room from four different angles, fully supports the claim that poll watchers were kept away from meaningful observation of ballot handling.)

The observers say that they arrived for their observation jobs around 8 p.m. They say in the first half of the 10 o’clock hour, a woman with blonde braids who appeared to be a supervisor “yelled out” to those present in the room that they would stop working for the night and would resume in the morning. The Republican poll watchers said they asked Fulton County Elections Spokesperson Regina Waller questions about the status of the ballot count multiples times but that she refused to answer. –The Federalist

According to Lead Stories, however, “There was never an announcement made to the media and other observers about the counting being over for the night and them needing to leave, according to [Frances Watson, chief investigator for the Georgia Secretary of State], who was provided information by the media liaison, who was present.” Lead Stories doesn’t name this “media liaison,” however according to the affidavits, it was Regina Waller – the Fulton County public affairs manager for elections.

As The Federalist‘s Hemingway notes:

OK, so on the one hand you have sworn affidavits from observers saying that supervisors told ballot counters to go home for the evening shortly after 10 p.m. and a video showing everyone leaving en masse at that time. And on the other hand, you have two government officials promising that no one was told that counting was over.

Hemingway further points out that ABC News reported ballot counters were sent home at the same time GOP observers say everyone was told counting had stopped. 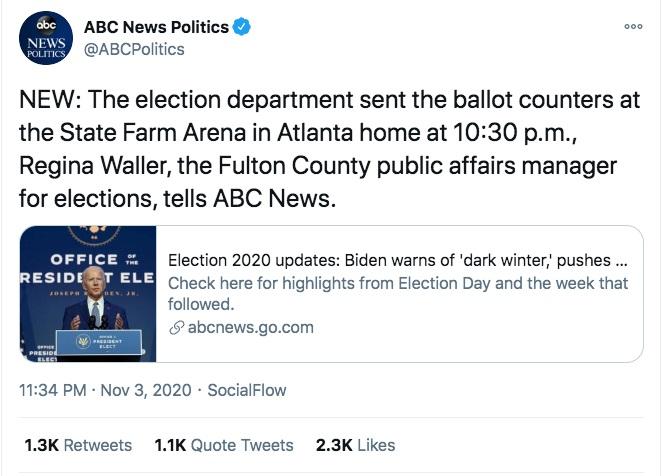 So, GOP poll watchers and the MSM reported that counting was delayed.

And it wasn’t just ABC that reported counting was being delayed. Many media outlets reported on counting delays. See, for example, “Fulton County stopped counting absentee ballots for the night.”

Local NBC journalists on site that night independently confirmed “they were told counting was done for the night” and given no indication it would continue before the next morning. The Atlanta Journal-Constitution even reported of a “plan” to stop scanning ballots at the same time the poll watchers said things were shut down… –The Federalist

Misleading: While Newsweek – and later Lead Stories – claim that while partisan observers may not have been present for the vote count, an “unnamed state election board monitor was present.”

A state election board monitor, who asked for his name not to be used due to safety concerns, told Lead Stories on the phone on December 3, 2020, that he was present at the vote counting location beginning at 11:52 p.m., after leaving briefly at earlier in the evening. He then stayed until about 12:45 a.m., when the work that night was completed.

The deputy chief investigator for the secretary of state’s office was present beginning at 12:15 a.m. November 4, he said. –Newsweek

Yet, the monitor was there for less than an hour – from 11:52 p.m. on election night to 12:45 a.m. – which means that nobody was observing the count for over an hour after the ballots began being scanned at 10:35 p.m.

So you have the contemporaneous media report about the closing + the fact that GOP observers left, believing the counting to be over for the night.

Seems pretty clear that—regardless of who fesses up to making the announcement or not—it was a thing that happened.

So, the Lead Stories ‘fact check’ actually reveals that the monitor wasn’t present for much of the time in question. Meanwhile, the Secretary of State’s monitor “is the subject of an affidavit from another witness, devoted exclusively to concerns about the monitor’s conduct prior to the late hours on election day, according to a member of the Trump team. The claims include that he was sleeping on the job and staring at his phone.”

Read the rest of the report here.