The Bush v. Gore election dispute in 2000, centering on some 500 votes in one state and “hanging chads,” was easy for the American people to digest.

But the Trump campaign’s hotly disputed challenge to the outcome of the 2020 campaign is based on evidence of many kinds of fraud compiled from numerous lengthy hearings in six battleground states and thousands of sworn affidavits.

It’s why White House trade adviser Peter Navarro has compiled a comprehensive report to back the Trump campaign’s claim of “theft by a thousand cuts.”

Titled “The Immaculate Deception: Six Key Dimensions of Election Irregularities,” it employs charts and other graphics to summarize the evidence from Arizona, Georgia, Michigan, Nevada Pennsylvania and Wisconsin.

TRENDING: Obama to give green light to Dems to take Biden out?

Navarro charges Democrats carried out a “coordinated strategy to effectively stack the election deck against the Trump-Pence ticket,” the National Pulse reported.

He concludes that “the weight of evidence and patterns of irregularities uncovered in this report are such that it is irresponsible for anyone – especially the mainstream media – to claim that there is ‘no evidence’ of fraud or irregularities.”

He recalls that at midnight, Eastern Time, on Election Day, Trump had won Florida and Ohio, and had “substantial and seemingly insurmountable leads” in Georgia, Pennsylvania, Michigan and Wisconsin.

“If these leads held, these four key battlegroundstates would propel President Trump to a decisive 294 to 244 victory in the Electoral College,” he writes in the executive summary. “Shortly after midnight, however, as a flood of mail-in and absentee ballots began entering the count, the Trump red tide of victory began turning Joe Biden blue.”

He notes also that, at the time, Biden held slim leads in Arizona and Nevada, and internal campaign polling indicated the president would close the gap.

The report provides a table of the alleged election irregularities across the six states, comparing the official Biden victory margin to the number of alleged illegal ballots. 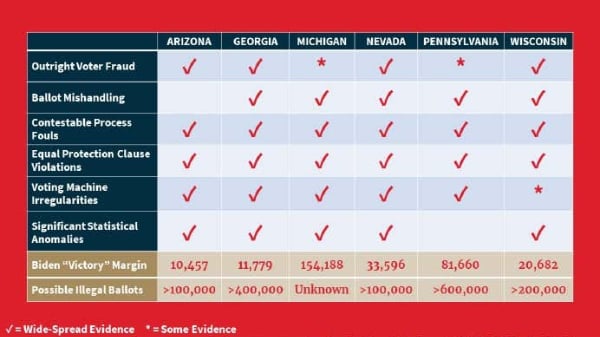 The report also notes the allegations of “ballot mishandling” via a “lack of adequate voter ID check,” “signature matching abuses,” “backdating of ballots” and “broken chain of custody.”

And there was “illegal ballot curing” and “abuse of poll watchers and observers” that allegedly allowed improperly registered people to vote.

He addresses the machines used to conduct elections that experienced “large-scale inaccuracies together with inexplicable vote switching and vote surges, often in favor Joe Biden.”