Chairman of the Hamas Political Bureau and de facto head of the Gaza Strip Ismail Haniyeh uses Twitter to glorify child “martyrs” among other things:

The innocent Palestinian child Hamza Nassar 11y while he was on his way to buy vegetables to his family to eat it at Iftar time, he was hit by an Israeli rocket and died immediately. He was returned to his blind mother dead, Hamza is a martyr.#GazaUnderAttack #Save_Sheikh_Jarrah pic.twitter.com/kqM1BbDDGe

In a deleted post, Haniyeh celebrated a bombing in Tel Aviv:

In another since-deleted post online, Haniyeh said, “God willing, we will stop our short-range missiles and use long-range missiles” to attack Israel: 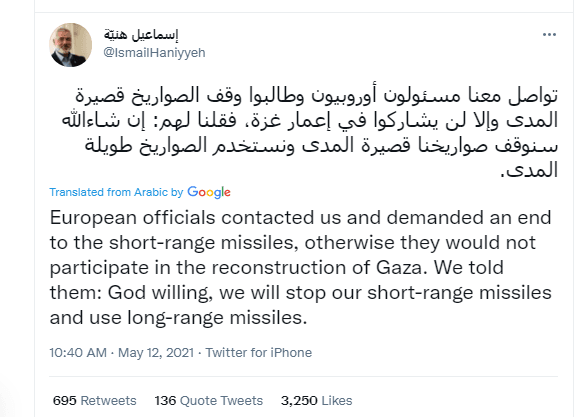 Considered second in command of Hamas, Mousa Mohammed Abu Marzook also uses Twitter to encourage violence against Israel, saying, “Do not coexist with the occupation,” to his more than 360,000 followers: 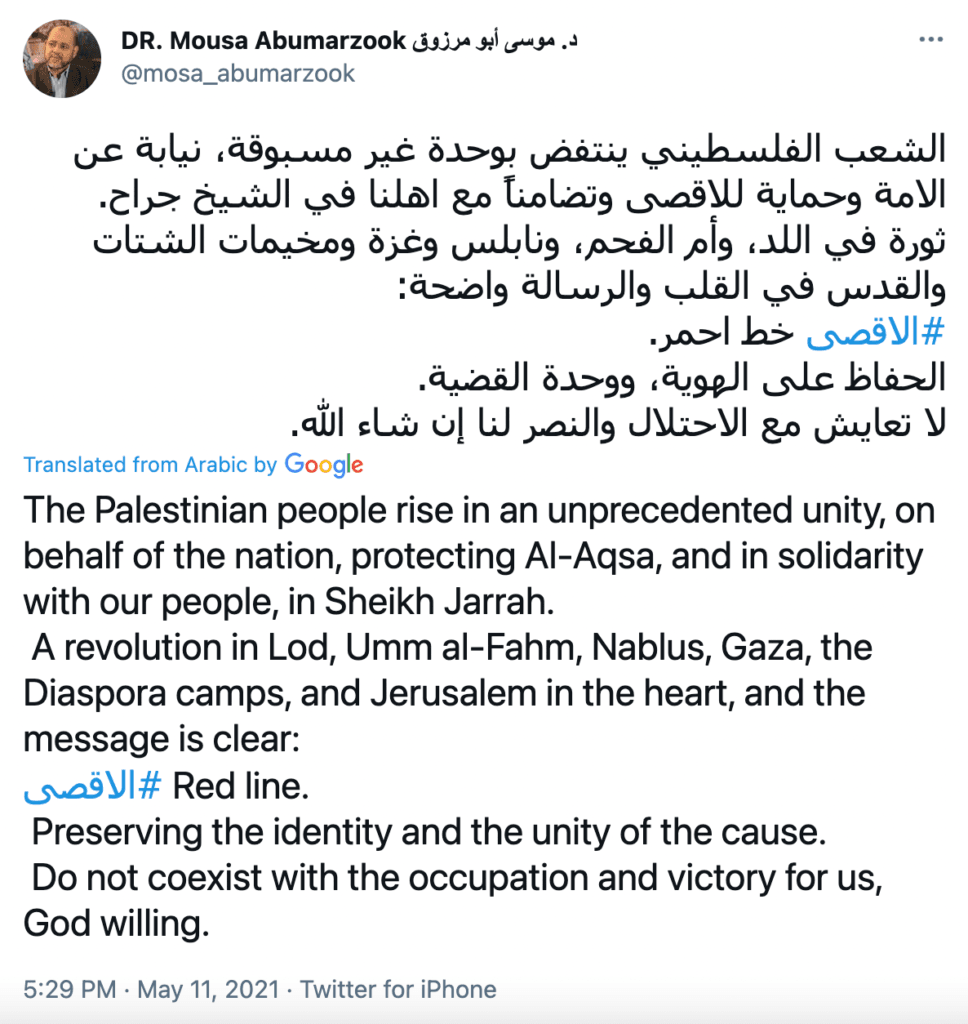 In English, both leaders shared they will use everything from bare hands to rockets to “defend our ppl & their rights!”

Last week, Abu Marzook warned online “that the occupation will pay the price for what it does in Jerusalem and Al-Aqsa,” foreshadowing the rocket attacks from Gaza on Israeli civilians.

Other global leaders, including Iranian Ayatollah Khamenei, also use Twitter to encourage followers to fight Israel:

Since day 1, Zionists turned occupied Palestine into a base for terrorism. Israel isn’t a country; it’s a #TerroristCamp against Palestinians & other Muslim nations. Fighting this despotic regime is fighting against oppression & terrorism. And this is everyone’s responsibility.

Palestinians are awake and determined. They must continue this path. One can only talk with the language of power with these criminals. They must increase their strength, stand strong, confront the enemy, and force them to stop their crimes. #FreePalestine

In January, Trump was permanently banned from the social media giant, “due to the risk of further incitement of violence,” according to a statement from Twitter.

As reported last week by Breitbart News, even social media accounts that mirror Trump’s posts to his website are banned by Twitter:

Trump launched his new website, “From the Desk of Donald J. Trump,” yesterday. The platform allows the president to communicate directly to his followers.

Twitter has not publicly stated if they plan to ban accounts encouraging violence against Israel.