President Donald Trump’s campaign on Sunday appealed the dismissal of its election lawsuit in Pennsylvania, according to a notice filed in federal court, bringing the campaign one step close to its stated goal of getting an election challenge to the Supreme Court.

District Court Judge Matthew Brann dismissed the campaign’s lawsuit on Saturday, opining that the plaintiffs lacked standing to bring the claim, among other issues. The campaign said it has appealed the ruling to the United States Court of Appeals for the Third Circuit.

President Donald Trump on Saturday foreshadowed the appeal on Saturday.

“It’s all a continuation of the never ending Witch Hunt,” the president wrote on Twitter. “Judge Brann, who would not even allow us to present our case or evidence, is a product of Senator Pat ‘No Tariffs’ Toomey of Pennsylvania, no friend of mine, & Obama – No wonder. 900,000 Fraudulent Votes!” Trump was referring to Sen. Toomey (R-Pa.) and Judge Matthew Brann.

The plaintiffs in the lawsuit included the Trump campaign and two individual voters whose mail ballots were rejected without an opportunity to cure the defects.

In his memorandum opinion, Brann argued that the individual plaintiffs failed “to establish that it was defendants who caused these injuries and that their purported injury of vote-denial is adequately redressed by invalidating the votes of others.” The judge pointed out that the plaintiffs sued the counties which extended the opportunity to voters to cure their ballots and not those which did not offer an opportunity to do so.

“None of defendant counties received, reviewed, or discarded Individual Plaintiffs’ ballots. Even assuming that defendant counties unconstitutionally allowed other voters to cure their ballots, that alone cannot confer standing on plaintiffs who seek to challenge the denial of their votes.”

Brann’s dismissal of the lawsuit came before the stage of the proceedings where the Trump campaign would be able to present evidence. Since being filed on Nov. 9, the case featured a withdrawal by the attorneys representing Trump, a harassing voicemail left on a Trump campaign attorney’s phone by a lawyer from a firm representing the defendants, and a major revision to the Trump campaign’s original complaint.

Pennsylvania’s deadline to certify the results of the 2020 election is on Monday, Nov. 23. The unofficial results show Former Vice President Joe Biden ahead of Trump by 80,000 votes.

As part of the lawsuit, the Trump campaign alleged that more than 682,000 absentee ballots were processed without Republican observers present, among other issues.

More than 20,000 absentee ballots in Pennsylvania were marked with receipt dates prior to the date they were allegedly sent, according to a researcher’s analysis of the state’s voter database. Roughly 58,000 other ballots have improbably return dates considering the U.S. Postal Delivery times.

Legal challenges in Pennsylvania piled up even as Brann dismissed the campaign’s flagship case in the commonwealth. A group of Republican politicians sued Pennsylvania on Saturday seeking to block the certification of the election results in the commonwealth by arguing that its vote-by-mail statute violates the state’s constitution. The lawsuit argues that Act 77, a law that made voting by mail without an excuse legal in Pennsylvania, violates the Keystone State’s constitution.

Jack Philips contributed to this report. 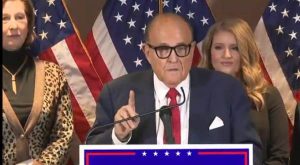