President Donald Trump issued a statement slamming Fox News for reporting “no fraud found in the Presidential Election” and ignoring the “very important” Arizona Senate hearing that showed enough evidence of voter fraud and irregularities to change the 2020 election outcome in the state. This comes amid calls from state officials to decertify the election in Arizona.

President Trump released a new statement on July 16 slamming Fox News “and other media outlets” for incorrectly siding with the Maricopa County Election board by reporting that there was no voter fraud in the 2020 Presidential election. “They spew the gross misinformation purposefully put out by the county and the Associated Press, and IGNORE the very important Arizona Senate hearing,” President Trump wrote.

President Trump made note of the explosive revelations from the Arizona Senate hearing on the Maricopa County audit, “which showed 168,000 fraudulent ballots printed on illegal paper (unofficial ballots).” The groundbreaking hearing revealed that more than 74,000 mail-in ballots were counted in Maricopa County with no record of them being sent out to voters. (READ MORE: BOMBSHELL: Over 74,000 Mail-In Ballots Counted With No Record Of Being Sent Out, Verification Process Degraded To Nothing) 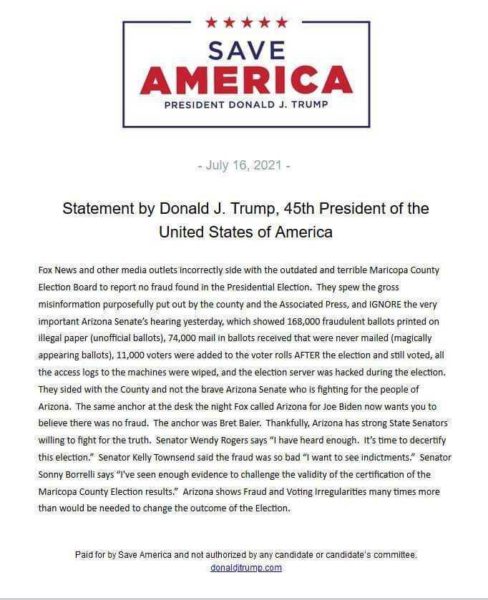 President Trump pointed out that “all the access logs to the machines were wiped, and the election server was hacked during the election.” Tech contractor Ben Cotton, a witness in the Arizona Senate hearing confirmed that the Maricopa County election system was “compromised” during the 2020 election. (READ MORE: Maricopa County Bombshell: ‘The Election System Was Actually Compromised Or Breached’)

“An element of the election system was actually compromised or breached during the course of the November 2020 election… The registration server that was public facing did have unauthorized access to that. In cybersecurity terms, it was breached,” Cotton revealed. Republican state Senate liaison to the Maricopa audit Ken Bennett also confirmed that “thousands” of ballots that were set aside to be duplicated had no serial number, or a very “light” unreadable serial number, rendering a proper count impossible during the election.

In the statement, President Trump condemned Fox News and mainstream media outlets for siding “with the County and not the brave Arizona Senate,” who is at odds with the Maricopa County Election Board over their 2020 election transparency efforts.

Wondering why Maricopa County prefers to tweet jabs instead of just sitting down and talking with the auditors If we work together we can finish this audit and let the voters know their ballots will be safe for future elections https://t.co/ZDCI6mPr6g

“The same anchor at the desk the night Fox called Arizona for Joe Biden now wants you to believe there was no fraud. The anchor was Bret Baier,” President Trump continued.

“Thankfully, Arizona has strong State Senators willing to fight for the truth,” President Trump added, citing recent statements from Arizona Senator Wendy Rogers and other Arizona state officials, who are calling for the state’s electors to be recalled and for the election to be decertified due to the evidence of fraud revealed in the Maricopa County audit. (READ MORE: BREAKING: Arizona Senator Calls For Recalling Electors After Bombshell Audit Hearing)

Arizona Senators Kelly Townsend and Sonny Borrelli have also joined in, voicing their concerns and challenging the validity of the 2020 election. “I want to see some indictments,” said Senator Townsend. “Arizona shows Fraud and Voting Irregularities many times more than would be needed to change the outcome of the Election,” President Trump concluded.

In a July 17 statement, President Trump commented on the damning audit hearing shortly after its conclusion, as National File reported. “Maricopa County refuses to work together with the Senate and others who are merely looking for honesty, integrity, and transparency. Why do the Commissioners not want to look into this corrupted election? What are they trying to hide? The highly respected State Senator Wendy Rogers said in a tweet the hearing today means we must decertify the election. In any event, the Senate Patriots are moving forward with final results to be announced in the not-too-distant future, but based on today’s hearing, why even wait?” President Trump said. In a separate statement, President Trump declared that the Arizona and Georgia “numbers will be released shortly, and they are extraordinarily big and highly determinative!”