One of President Donald Trump’s lawyers said that certifications issued by state officials of the presidential election are merely a “procedural step.”

“Certification by state officials is simply a procedural step,” attorney Jenna Ellis wrote on Monday evening. “We are going to continue combatting election fraud around the country as we fight to count all the legal votes. Americans must be assured that the final results are fair and legitimate.”

It came as the Michigan Board of Canvassers voted 3-0 to certify the election in the state. One Republican on the board abstained from voting, while the other Republican voted to certify.

Last week, Georgia Gov. Brian Kemp and Secretary of State Brad Raffensberger announced the results of the presidential election were certified. Kemp, in a press conference on Nov. 20, called for an audit of the process, while his spokesman told news outlets: “The Governor has formalized the certification delivered to our office by the Secretary of State—as is required by state law.”

Some Trump surrogates and allies expressed hope that Michigan state lawmakers could intervene and vote to send up their own slate of electors to the Electoral College, rather than the ones that were selected by Democrats.

Two Michigan Supreme Court Justices urged a lower court to move quickly and “meaningfully assess” allegations of voter fraud, according to a Monday order that also denied an appeal by two Wayne County voters who sought to halt certification so that an audit could be carried out. Last week, two Republicans said they were harassed and pressured into voting to certify the county’s election, while also saying they were promised an audit that never came.

The court noted in its order about the presence of “troubling and serious allegations of fraud and irregularities.” The justices noted that plaintiffs produced evidence to back their allegations, including one where ballots were counted from voters whose names were not in poll books. Instructions were also allegedly handed down by officials in some areas to “disobey election laws and regulations,” the court said. 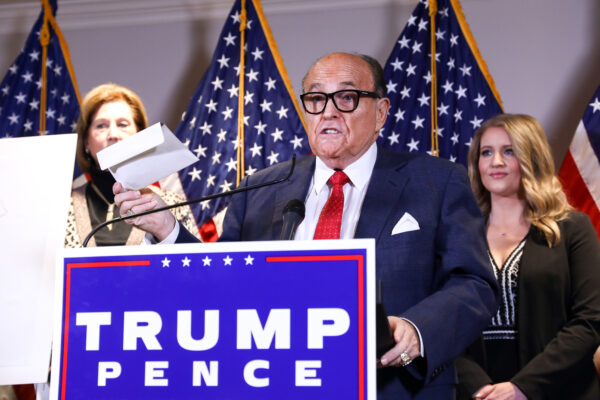 The two judges furthermore called for “the most expedited consideration possible of the remaining issues,” saying that a trial court should “meaningfully assess” the plaintiffs’ allegations in an evidentiary hearing, among other means.

Trump’s legal team, meanwhile, has said they believe that some of their lawsuits will make it to the U.S. Supreme Court. The U.S. Third Court of Appeals on Monday agreed to hear their case in Pennsylvania.

“One side has to appeal a final opinion they disagree with. As I said, Third Circuit has granted our appeal, and we already have one case from PA pending before SCOTUS,” Ellis wrote, referring to the Supreme Court.

Election data provided by the Michigan Secretary of State’s office shows Democrat Joe Biden is ahead of Trump by about 150,000 votes in the state. NEW ERIC COOMER VIDEO UNCOVERED: Admits in 2015 Dominion Machines DO NOT Have Ability to Spit Out Fraudulent Ballots (VIDEO) ‘Stop the Steal’ Rallies in California, Nevada, and Denver