Trump said in a written statement that “Republicans did not turn out to vote because they were so angry and disappointed with Georgia Republican leadership and Governor [Brian] Kemp for failing to stand up to Stacey Abrams and the disastrous Consent Decree that virtually eliminates signature verification requirements across the state (and much worse), and was not approved by the State Legislature as required by the Constitution.”

McConnell’s refusal to support a proposal to send $2,000 stimulus checks was the other reason, Trump alleged.

That refusal “was used against our Senators and the $2,000 will be approved anyway by the Democrats who bought the Georgia election—and McConnell let them do it!”

Queries to the offices of McConnell and Kemp weren’t immediately returned.

Control of the Senate came down to the two races in Georgia, which both went to runoffs after no candidates reached a majority in the Nov. 4, 2020, results.

Republicans held both seats. David Perdue, a businessman, won his 2014 election. Kelly Loeffler, a businesswoman, was appointed to a seat after Sen. Johnny Isakson (R-Ga.) retired due to failing health.

Perdue beat filmmaker Jon Ossoff in the general election by over 88,000 votes, but came just short of avoiding a runoff. Loeffler and pastor Raphael Warnock emerged from a free-for-all jungle election for the remaining two years of Isakson’s term, with Rep. Doug Collins (R-Ga.) getting third. 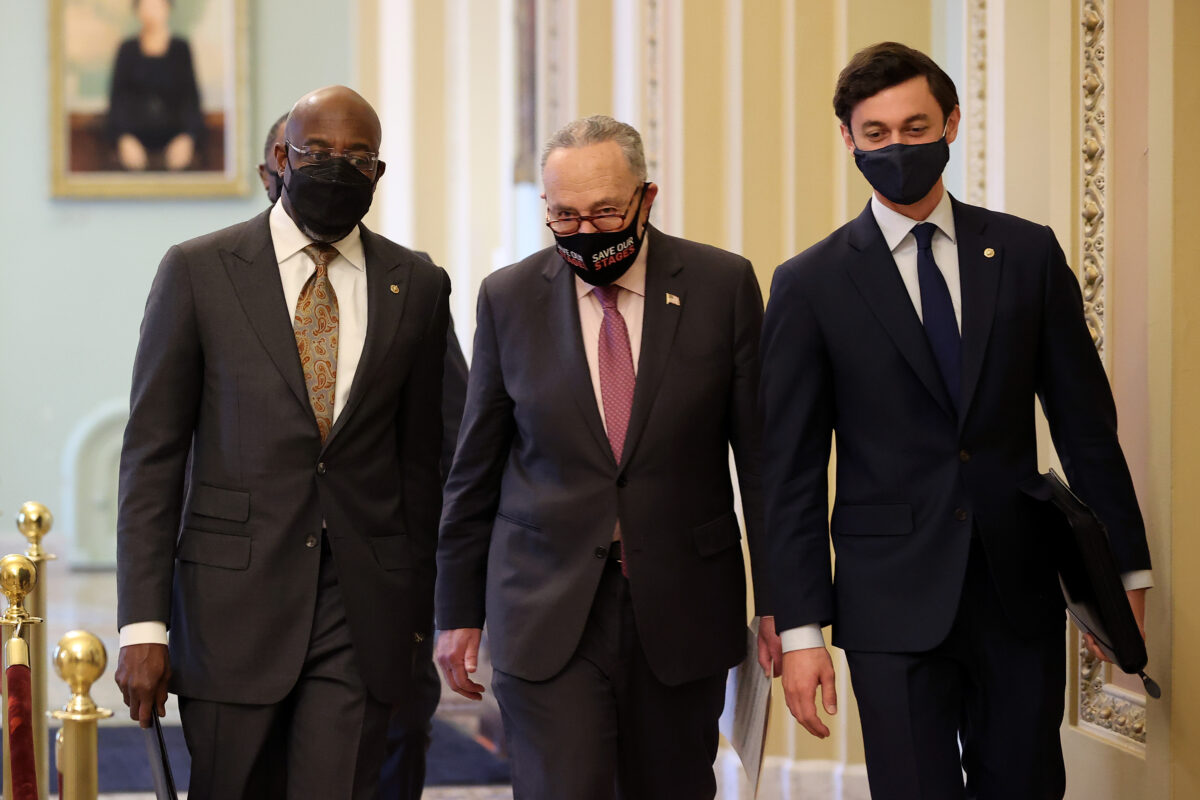 Ossoff in the runoffs triumphed over Perdue by about 55,000 votes while Warnock beat Loeffler by over 1 percent.

They were sworn in on Jan. 20, the same day President Joe Biden was inaugurated.

The wins gave Democrats control of the Senate, despite it being divided evenly between the parties, including two nominal independents who caucus with Democrats. That’s because Vice President Kamala Harris can cast tiebreaking votes in her role as president of the upper chamber.

Trump, many Democrats, and some Republicans supported a plan late last year to send a new round of stimulus checks to most Americans totaling $2,000.

McConnell on the Senate floor referred to the direct payments as “socialism for rich people.”

Kemp has defended his post-election actions, saying he could not legally intervene in the election process despite pressure from Trump.

Trump has since called for Collins to challenge Kemp in 2022 and early polls show the former would win.