President Donald Trump said on Saturday that voting machines may have been hacked during the November election.

“There could also have been a hit on our ridiculous voting machines during the election,” he wrote in a Twitter post.

The president apparently was referring to the SolarWinds hack which caused a number of government agencies to be compromised.

He said the hack is not as big as it’s reported.

“The Cyber Hack is far greater in the Fake News Media than in actuality,” he wrote. “I have been fully briefed and everything is well under control.”

He also criticized the media for ignoring China as a possible origin of the hack.

CISA didn’t respond immediately to a request for comment from The Epoch Times. 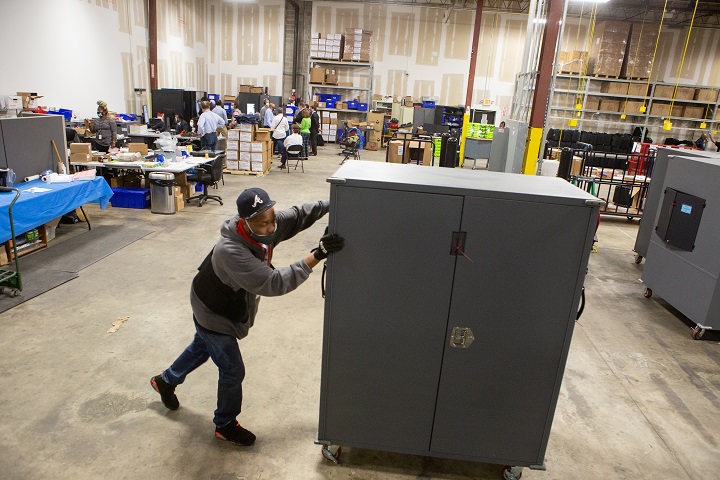 The Cybersecurity and Infrastructure Security Agency (CISA) issued an emergency directive on Dec. 13 announcing that a known compromise involving SolarWinds Orion products are being exploited by malicious actors.

SolarWinds said in a recent filing that up to 18,000 customers may have had the tainted software. The company ignored warnings that its software could be accessed using a simple password.

Non-Orion products don’t appear to have been compromised, SolarWinds said.

SolarWinds’s approximately 300,000 customers include government agencies and all five branches of the U.S. military, according to a partial customer listing it has since taken offline. The Energy Department, Department of Commerce, Microsoft, Pima County government in Arizona, Cox Communications among other institutions have confirmed their systems were influenced by the recent safety breach.

The CEO of Dominion Voting Systems, the company under controversy after the November election, said on Tuesday that the company has never used the SolarWinds Orion platform which experts believe was breached by hackers as far back as last year.

“We don’t use the SolarWinds Orion package that was the subject of the DHS report from the 13th,” CEO John Poulos told legislators in Michigan via video link.

However, a screenshot of a Dominion webpage that The Epoch Times captured shows that Dominion does use SolarWinds technology. Dominion later altered the page to remove any reference to SolarWinds, but the SolarWinds website is still in the page’s source code.

Poulos said Dominion hasn’t ever used the Orion platform. No legislators asked him about what SolarWinds technology the company does use, and Dominion didn’t respond to requests for comment from The Epoch Times.

Zachary Stieber contributed to the report.