President Donald Trump shared a video on Thursday urging his supporters to contact state legislators in regards to allegations of voting irregularities in the Nov. 3 election and “demand an honest election and an honest count.”

In a tweet, Trump shared a video entitled “STOP THE STEAL!” which has been viewed over 6 million times on Twitter. It begins by touting Trump’s accomplishments in the area of job creation, the economy, and efforts to surge the development of a COVID-19 vaccine.

The video then notes that “America rewarded President Trump with over 74 million votes,” and says victories in some states suggest a “landslide Trump victory.”

“But something happened,” the ad says. “Some states rushed out mail-in ballots—a recipe for fraud. Dead people voting. Ballots miraculously appeared. Biden ballots added in the middle of the night.”

“It’s an outrage,” the ad claims. “The American people deserve to know the truth.”

State elections officials have rejected the notion that there was widespread voter or elections fraud, while former Attorney General William Barr said the Department of Justice had not found evidence of fraud of a significant enough scale that would overturn the results of the election.

Members of the Electoral College have cast 306 votes for Democratic presidential candidate Joe Biden, exceeding the threshold of 270 needed for a candidate to be certified the winner at a special joint session of Congress on Jan. 6. Alternate slates of Republican electors in battleground states have cast votes for Trump, although state legislatures would need to authorize these votes for them to be accorded legal status. Some Republican lawmakers have said they plan to object to the certified Electoral College votes for Biden at the joint session, while Trump campaign attorney Jenna Ellis has called on state legislatures to convene ahead of Jan. 6 and approve the alternate votes to give them legal force, potentially setting the stage for a “dueling electors” scenario, where lawmakers would have to decide which to accept. 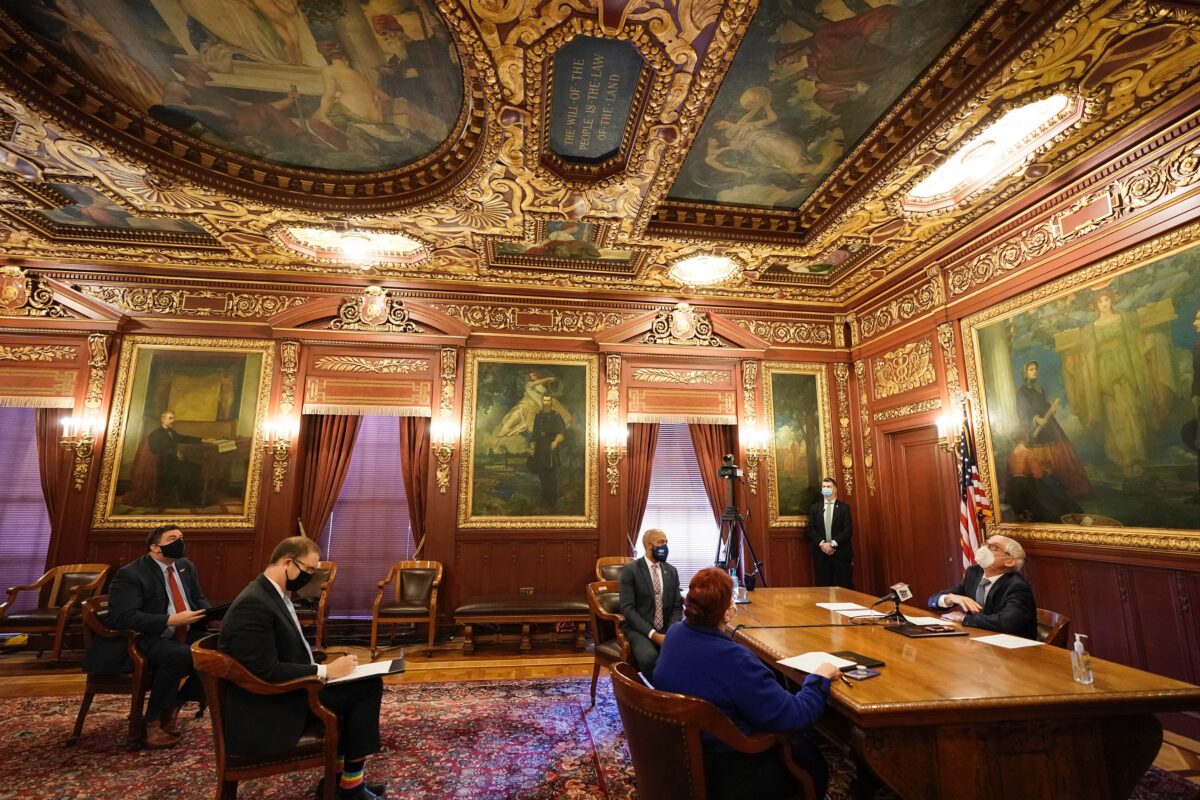 Wisconsin Gov. Tony Evers looks up at a sign on the ceiling saying “The will of the people is the law of the land” as members of Wisconsin’s Electoral College cast their votes at the state Capitol in Madison, Wis., Monday, Dec. 14, 2020. (Morry Gash/AP Photo, Pool)

The video is one of two ads first released by the Trump campaign on Dec. 11, the same day the U.S. Supreme Court rejected a lawsuit from Texas to challenge the election results in four battleground states, arguing that the Lone Star state lacked the standing to bring the case.

“As evidence of voter fraud and mishandled ballots mounts in battleground states across the country, the Trump Campaign is releasing two new ads titled ‘The Evidence is Overwhelming—FRAUD!‘ and ‘STOP THE STEAL!‘” the campaign said. It said both ads “inform viewers of the widespread corruption that occurred in the 2020 election, including suitcases of Biden ballots, dead people voting, and money-for-vote schemes, while also encouraging voters to call their legislators to demand a free and fair election.”

YouTube removed both videos from its platform, but they remain available on Twitter. Clicking the YouTube links to the ads takes viewers to the platform, featuring a black screen with the following message overlaid: “This video has been removed for violating YouTube’s Community Guidelines.”

Officials at YouTube didn’t immediately respond to a query by The Epoch Times about the reason for blocking the ads. Their removal may relate to a new policy released by YouTube on Dec. 9, which indicates that the platform would start to remove content that makes allegations of “widespread fraud or errors” that took place in this year’s presidential election. In a statement, the reason YouTube gave for the change is that the Dec. 8 “safe-harbor deadline” for the U.S. presidential election had passed, and that “enough states have certified their election results to determine a president-elect.”

The first ad, called “The Evidence is Overwhelming—FRAUD!“, begins with the narrator saying, “America deserved an honest election and this is what they got, suitcases of ballots added in secret in Georgia,” as images of Nov. 3 security footage from a polling location in Fulton County highlight what appear to be containers of ballots. The Trump campaign presented the security footage to Georgia lawmakers on Dec. 3 and attorney Rudy Giuliani commented on the footage on Twitter, saying that “the videotape doesn’t lie. Fulton County Democrats stole the election. It’s now beyond doubt.”

State officials, however, have pushed back against the claim that the video shows anything illegal, saying that what has been claimed to be “suitcases” were, in fact, standard containers used to secure ballots and that the ballots in question were opened and prepared for counting earlier that night in full view of observers.

The ad continues with claims of “dead people voting in Wisconsin, a money-for-vote scheme in Nevada, poll watchers denied access in Pennsylvania, faulty ballot drop boxes, and crooks facing felony charges in Michigan,” with the latter reference relating to reports that a Southfield City election clerk was arrested in September and charged with six felonies stemming from the Nov. 6, 2018, election.

“The evidence is overwhelming,” the video claims, and, like the other ad, urges people to contact their state legislators and “demand they fight for honest elections.”

Peter Navarro, an adviser to Trump, last week released a detailed report summarizing election irregularity allegations in six battleground states, concluding that they are serious enough to warrant an urgent probe and substantial enough to potentially overturn the results.

Since Election Day, Trump and third-party groups have pursued legal challenges to the outcome of the election in the six battleground states. None of the efforts have so far borne fruit.