Trump to Mitch McConnell: ‘Too Soon to Give Up’ on Election Fight

“Mitch, 75,000,000 VOTES, a record for a sitting President (by a lot),” Trump wrote to McConnell, underscoring the amount of support he has from Americans.

It’s “too soon to give up,” Trump continued. The “Republican Party must finally learn to fight,” he said. “People are angry!”

The remarks were shared alongside a Daily Mail article about Republicans turning on McConnell after he made his remarks about Biden on the floor of the Senate on Tuesday.

On Tuesday and Wednesday, McConnell drew a torrent of critical comments. 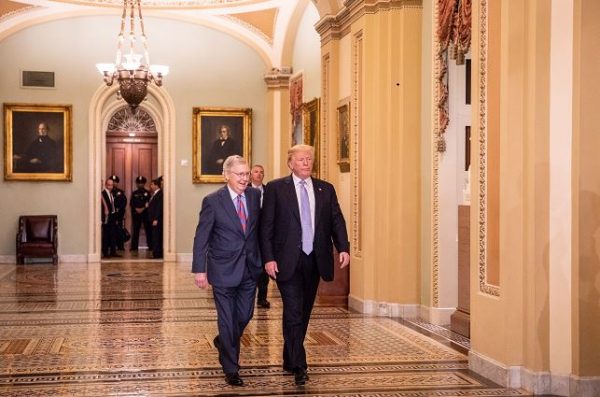 “We won’t fail or cower like some in the Republican Party have shown,” tweeted Flynn, who was recently pardoned by Trump.

Rep. Mo Brooks (R-Ala.) has said that he would challenge the Electoral College vote during the Joint Session next month. Taylor-Greene, after she is sworn in, has said she would do the same, and meanwhile, Sen. Rand Paul (R-Ky.), told reporters that he is considering a similar move. Rep.-elect Barry Moore (R-Ala.) also indicated he would join the others.

“We’re still looking at all the legal stuff that’s happening with the legal cases and we’ll make our decision after we’ve seen all the legal challenges,” Paul told CNN on Dec. 10.

To challenge a state’s Electoral College votes, at least one House member and Senator have to object. Then, a complex series of votes and debates will ensue.

A spokeswoman for Sen. Mitt Romney (R-Utah) told The Epoch Times about a week ago that the effort to challenge votes is “madness,” pointing to a public comment made by the Utah senator.

“It would be saying, ‘Look, let’s not follow the vote of the people, let’s instead do it [sic] what we want.’ That would not be the way a democratic republic ought to work,” Romney said.

On Monday, several Republican parties in key states said their electors voted for Trump and Vice President Mike Pence, saying they did so to keep Trump’s legal challenges open.

Over the past month, Trump has alleged that there was significant election fraud that swung the presidential race from him to Biden. His lawyers attempted to challenge the results in lawsuits filed in Michigan, Wisconsin, Pennsylvania, Arizona, Nevada, and Georgia.