DUMFRIES, Virginia — The top three Republicans on the ballot in Virginia’s election this November made their first public appearance together at a church Monday evening.

Glenn Youngkin, Winsome Sears, and Jason Miyares, the Republican candidates for governor, lieutenant governor, and attorney general, respectively, appeared together on a stage at the Montclair Tabernacle Church of God, making their debut introduction as a united ticket to a crowd of around 150 people.

The trio were nominated through a remote convention that took place May 8. Each took turns stumping at the campaign event, which opened with remarks from Virginia GOP chair Rich Anderson, as well as both opened and closed with a prayer.

Youngkin, during his speech, took several jabs at former Virginia Gov. Terry McAuliffe (D), who is the presumed Democrat candidate he will face in November.

McAuliffe, who Youngkin repeatedly referenced as “Terry McAuliffe and his left liberal friends,” is a longtime Clinton ally and former chair of the Democratic National Committee. The Virginia Democrat is running against four other Democrat candidates in a June primary, though his name recognition and fundraising abilities give him a substantial advantage.

“He’s a recycled, old politician with old politics, and not even the Democrats want him,” Youngkin said as he touched on an array of topics, including protecting the right to work and education, which the Republican gubernatorial candidate has told Breitbart News in the past he believes will be two key issues that swing Northern Virginia Democrat voters.

“Terry actually wants to get rid of right to work,” warned Youngkin, who is a former CEO of the Carlyle Group and campaigned as a political outsider. “He wants every Virginian to pay a portion of their salary to his union boss friends. That’s what he wants. He wants big government to have big taxes, big regulations, and centralized decision-making.”

He added, “Oh by the way, the best jobs program we can come up with right now is one where we ensure Terry McAuliffe does not have a job in November.”

On education, he promised to fully restore in-person learning and rid of critical race theory that is being infused into public education curriculums. Critical race theory, broadly speaking, assumes America is inherently and systemically racist against nonwhite people.

Sears, the candidate for lieutenant governor, chided in her remarks that Virginia wants to teach “reading, writing, and racism instead of reading, writing, and arithmetic,” a reference to the state’s department of education recently proposing to eliminate accelerated math classes through tenth grade in part in the name of equity.

Sears, a black woman born in Jamaica, spoke about her father immigrating to America in the height of the civil rights movement in 1963, saying he started off in the country with no money, was able to put himself through school and find work, and now is comfortably retired and residing in Georgia.

“I say all this to say, folks, you are not looking at a victim,” Sears said, adding, “I don’t need the Democratic Party to save me. I already have a savior.” 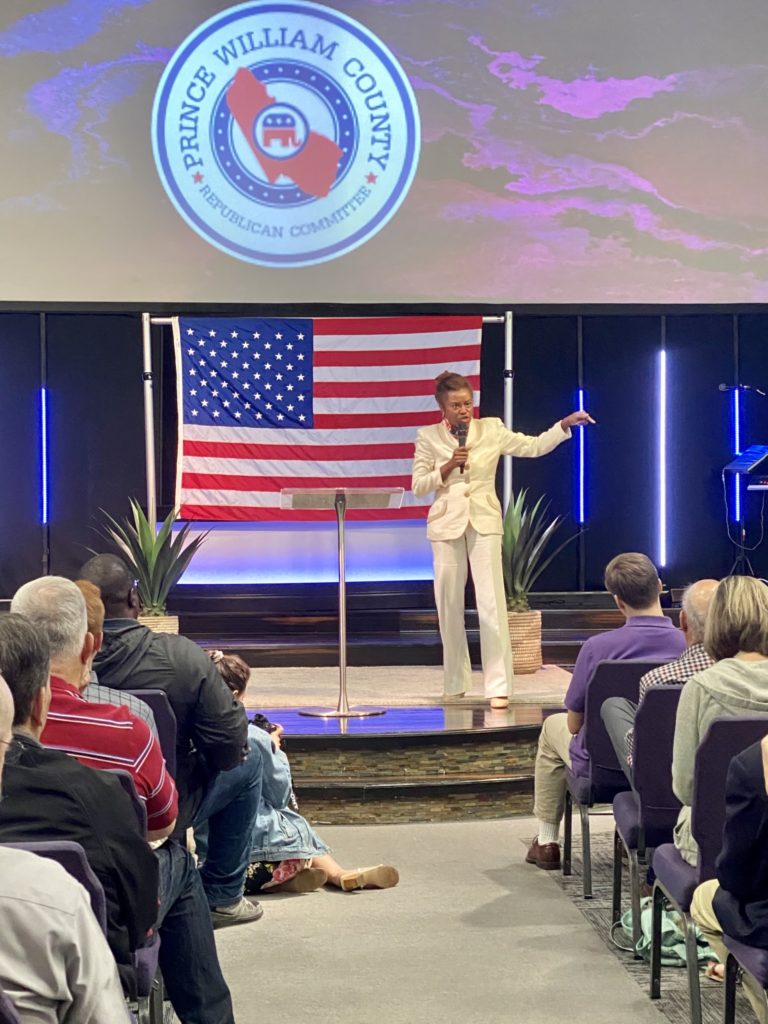 Miyares, the attorney general candidate and current delegate representing Virginia Beach, is a Cuban American, a fact that could create, depending on the results of the Democrats’ June primary, a Republican ticket more diverse than the Democrats’. Miyares, like Sears, talked about his family’s background during his speech, saying his mother fled Communist Cuba in 1965 while it was under the rule of dictator Fidel Castro and was able to achieve the “American miracle” after immigrating to the U.S.

Virginia’s Democrat primary, in which the party will vote for its candidates for governor, lieutenant governor, and attorney general, is June 8. The general election will take place November 2.