The deal had been held up over a dispute over the Fed’s emergency lending facilities, such as its unilateral ability (with Treasury permission) to buy corporate bonds and ETFs in the open market, but at around 9 p.m. on Saturday, Republicans told Schumer that they would accept a compromise deal which would allow the Fed to retain its ability to set up emergency lending programs without congressional approval. But the Fed wouldn’t be able to replicate programs identical to the ones it started in March at the beginning of the pandemic without the approval of Congress; in short if the Fed is to restart any of the 4 emergency 13(3) programs and lending programs that are set to expire on Dec 31 (shown in red below), it will have to get Congressional approval. These four programs are the market corporate credit facility, the secondary market corporate credit facility, the Main Street lending program and the municipal credit facility.

The Fed will retain more flexibility over restarting the Term Asset-Backed Securities Loan Facility (TALF), which will be closed but can be restarted in the future. It’s worth noting that most of the expiring programs have seen little usage in recent months…

… and even the Fed’s corporate bond buying program (the SMCCF) has barely seen any action after July. 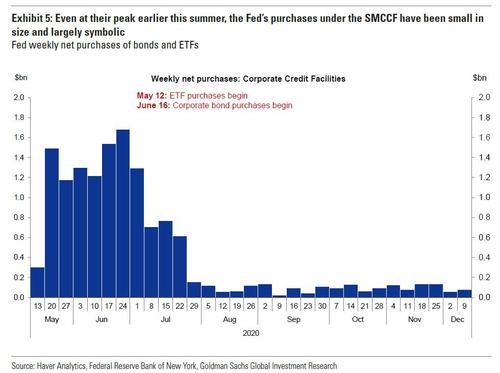 Toomey agreed to a narrower approach on dealing with potential “copycat” lending facilities. Negotiators agreed to specific language instead of merely an agreement in principle.  A senior Democratic aide said that Toomey “has agreed to drop the broad language in his proposal that would have prevented the Fed Chair from establishing similar facilities in the future to the ones created in March.”

“Compromise language is being finalized and, now that this obstacle has been cleared, a final agreement on an emergency relief package is significantly closer,” the Democratic aide said.

The compromise will sweep out the $429 billion in unspent CARES Act funding for the Federal Reserve’s credit lending facilities and repurpose it as an offset for a new $900 billion coronavirus relief bill, GOP sources said. In November, Treasury Secretary Steve Mnuchin already said he would return the $429 billion in unspent CARES money to the general fund. Toomey, however, questioned that claim on Thursday.

“I’m not certain the secretary has committed to putting this in a general funds category,” he told reporters earlier in the week. “I’m not sure I interpret his comments the way you do. And there’s also the fact there are other funds in the [Exchange Stabilization Fund] account. In any case, by having the language that we have it precludes the possibility of restarting these programs from any source.”

The last minute compromise sets the stage for a vote on a Covid stimulus bill as soon as today.

With the dispute over the Fed provision resolved, a final agreement on the full coronavirus relief package was significantly closer, a senior Democratic aide told the WSJ late Saturday. Similarly, a senior House Democratic aide told The Hill that the Toomey deal sets the stage to iron out all the other less significant differences that had stalled the negotiations for weeks. “We expect remaining open items to fall into place overnight,” the aide said.

Top Senate Democrat, Chuck Schumer, told reporters he thought both the House and Senate would be able to vote Sunday on the relief bill, which is expected to be combined with a spending bill needed to avoid a partial government shutdown. The government’s current funding expires at 12:01 a.m. Monday.

The republicans agreed: a spokesman for Senate Majority Leader Mitch McConnell said early Sunday that now that the Fed dispute had been resolved, “we can begin closing out the rest of the package to deliver much-needed relief to families, workers, and businesses.”

Negotiations accelerated this week after congressional leaders agreed to drop two provisions: funding for hard-hit state and local governments, which Democrats and some Republicans had sought, as well as liability protections for businesses and other entities operating during the pandemic, a top GOP priority.

The stimulus package under discussion is expected to include $300 a week in enhanced unemployment benefits, a second round of stimulus checks and funding for schools, health-care providers, vaccine distribution and small businesses. Specifically, the package will include direct stimulus checks between $600 and $700, according to a commitment GOP leaders made to Sen. Josh Hawley (R-Mo.) on Friday. Sen. Bernie Sanders (I-Vt.) worked with Hawley to include the stimulus checks.

According to the WSJ, lawmakers were working out differences Saturday surrounding the distribution and eligibility requirements of the roughly $600 direct checks expected to be included in the final bill, the duration and limits around a temporary increase in food-stamp benefits, and how to structure a relief program for live-performance venues and other industries seeking aid.

President Trump urged lawmakers to finish work on the relief package. “GET IT DONE, and give them more money in direct payments,” Trump Twitted early Sunday morning.

Why isn’t Congress giving our people a Stimulus Bill? It wasn’t their fault, it was the fault of China. GET IT DONE, and give them more money in direct payments.

Momentum had slowed on Friday and Saturday after Democrats objected to a push from Toomey to insert a measure that would restrict the Fed’s ability to establish the types of emergency lending programs that it authorized in March to curb an emerging financial panic. That step would go beyond an earlier proposal to revoke $429 billion provided to the Treasury Department to backstop losses in the Fed lending programs. Treasury Secretary Steven Mnuchin last month declined to allow the programs to continue after Dec. 31, saying he didn’t think it was legally allowed. A nonpartisan congressional research arm disputed that interpretation on Thursday.

Saturday’s negotiation caps more than seven months of fruitless talks between Democrats, the White House and Senate Republicans over the size and scope of a new coronavirus relief bill. Speaker Nancy Pelosi and House Democrats proposed the $3.4 trillion Heroes Act in May and then amended their request to a $2.2. trillion relief bill in September. They ultimately settled on less than $1 trillion after extensive delays cost countless middle-class Americans their small and medium businesses..

A spokesman for Toomey hailed the deal as “an unqualified victory for taxpayers.”

“This agreement rescinds more than $429 billion in unused CARES Act funds; definitively ends the CARES Act lending facilities by December 31, 2020; stops these facilities from being restarted; and forbids them from being duplicated without congressional approval,” said Steve Kelly, Toomey’s communications director.

“This agreement will preserve Fed independence and prevent Democrats from hijacking these programs for political and social policy purposes,” he added. The GOP was worried that progressives next year might use Section 13(3) authority of the Federal Reserve Act to achieve their goals for addressing climate change or shoring up state and local budget shortfalls.  The compromise deal clarifies ambiguity about whether the lending facilities will be ended by Dec. 31.

The stimulus vote, which will likely come in the next few hours, will avoid the need for Congress to adopt another short-term funding extension to prevent a government shutdown. “If things continue on this path and nothing gets in the way, we’ll be able to vote tomorrow,” Schumer said.

The vote will be a combination of a coronavirus relief package and an omnibus spending bill. The Senate would vote later Sunday before government funding expires at midnight, but Senate Majority Leader Mitch McConnell will need to get consent from all 99 of his colleagues to waive procedural hurdles. The legislation is also expected to include a package of extensions of expiring tax provisions.