RACINE, WI – Mayor Cory Mason recently spearheaded a team that intended to reform policing in his city. It looked at all sorts of ways to eliminate the types of “institutional racism” in policing that they have failed to prove even exist.

But I will save that for another editorial.

This piece is an open letter to Mayor Mason and the rest of the committee he worked with to arrive at the recommendations shown in their almost 30 page report.

Specifically, I was blown away by the recommendations they made to discriminate against our nation’s veterans. They also went after those with PTSD.

Mr. Mason, I appreciate the effort you are putting forth to make sure that the members of the Racine Police Department are working in the most transparent and effective means possible as they safeguard your city and its residents. But, I must draw your attention to page 26 of your report, more specifically, the section on hiring practices.

I am both a veteran of the United States Army and a disabled veteran diagnosed with PTSD.

Are you aware Mr. Mayor, that discriminating against a veteran simply because they served in the military violates The Wisconsin Fair Employment Act (WFEA)?

According to the Wisconsin Department of Workplace Development:

“The WFEA prohibits employers, employment agencies, labor unions, licensing agencies, and other persons from discriminating against employees, job applicants, or licensing applicants because of their past, current or prospective military service.

Your own state laws tell you that you cannot do what you outline in your report.

Yet, there you are…recommending that the police department actively deny employment opportunities to the very people who raised their right hand and took an oath before God to protect and defend. The very people who have spent years putting their lives on the line to ensure our freedoms are the last ones you want to hire.

@RacinePD Per the mayor’s recommendations, does the RPD intend to discriminate against veterans as part of their hiring practices?

I have a major problem with that, as would the vast majority of veterans, at least the ones I know.

You see…while veterans make up only 6% of the US population, they account for roughly 20% of law enforcement.

According to your own report, you have 180 officers working in Racine. In layman’s terms, that means that roughly 36 of your officers are veterans.

Can you please provide us a list of exactly how these 36 officers are less fit to work the streets of your city than the other 144 officers you have?

No, seriously. Please provide a detailed list that justifies your illegal actions in recommending that the Racine Police Department refuse to hire veterans.

And while we are at it, please give us the list of reasons why you lumped bias and Post Traumatic Stress Disorder into a single bullet point.

When you are done putting that list together, please walk me through why you feel the need need to screen for PTSD, in the first place.

Are you simply buying into the misconceptions and stigmas surrounding PTSD, Cory?

You would think that an elected official would not be so narrow-minded and ignorant, yet here you are.

Do you think that all disabled veterans diagnosed with PTSD have anger issues?

Or is it that they are more prone to acts of violence?

Perhaps you think that PTSD leads to some sort of bias?

Not that you would know anything about bias, given that you are endorsing and condoning bias against some of the bravest American’s that will ever walk through your town.

Studies show that roughly 30% of US military veterans have PTSD.

That would mean that of the 36 officers on the RPD that are veterans, 10 of them likely deal with the daily battles that PTSD bring.

Can you identify them? Are there tell-tale signs?

Mayor Mason, without having any conversations or reading any personnel files, can you line up all 180 officers of your department, and identify the 36 that are veterans? After you fail at that task, I want you to correctly identify the 10 that most likely have been diagnosed with PTSD.

That’s because it is.

But your conclusions that former military and PTSD sufferers should not be hired by your police department would indicate that there are substantial differentiators between veteran officers and their civilian co-workers.

Differentiators that make them unfit to successfully fulfill the requirements of serving as a police officer in Racine, Wisconsin?

I would love to say that I think you are smarter than that. However, your illegal mandate in hiring practices, that are insulting at best and criminal at worst, would indicate that you may be just stupid enough to believe the crap that came out of that committee.

So, we might just put this to the test.

Any veterans looking for a job and interested in law enforcement, please feel free to apply for a job with the Racine Police Department. You can do so by clicking here.

Let’s see how many people get their applications rejected because they are a veteran or because they have been diagnosed with PTSD.

Mr. Mayor, please notify the city’s Human Resource Department to be on the lookout for our applications.

But I highly recommend updating your job postings. Under high school/college transcripts, it states:

“If you have any Military credits, please speak to your Base Supervisor.  We will need a break-down of all the classes/credits you received.”

Given that you no longer want to hire veterans, we should probably not list those, as it could be grounds for immediate disqualification from the hiring process.

“The screening is performed by Human Resources to determine that you are not automatically disqualified based upon some of your application answers.”

As I apply, will answering truthfully that I have a military background and PTSD, be grounds for being disqualified during the screening process?

I guess we will find out.

20 Dec 2020
Wisconsin
Pennsylvania Voter: ‘The Enemy Has Overplayed the Effort of Fraud’ 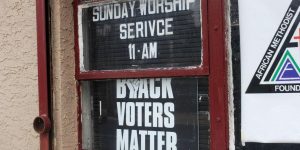