In an interview with The New York Times on Friday, Hagedorn said he found nothing in the law or the evidence presented in the case that would have allowed Trump to win the lawsuit.

A narrowly divided Wisconsin Supreme Court on Dec. 14 rejected Trump’s lawsuit challenging the election results in the battleground state about an hour before the Electoral College cast Wisconsin’s 10 votes for Democratic presidential candidate Joe Biden. In the 4-3 ruling, the court’s three liberal justices were joined by Hagedorn, who said three of Trump’s four claims were filed too late and the other was without merit.

“There was certainly nothing in the nature of the law or the facts that supported getting anywhere close to that, and I communicated that clearly,” Hagedorn said in the interview, referring to the remedy requested by the plaintiffs in the lawsuit, which sought to invalidate four groups of ballots cast in Dane and Milwaukee counties, both Democratic strongholds that gave Democratic presidential candidate Joe Biden a lead in Wisconsin.

The lawsuit sought to invalidate 28,000 ballots cast by voters who said they were “indefinitely confined” so that they could submit an absentee ballot application without providing a photo ID; some 170,000 absentee ballots cast in person before Election Day with a different application used by those who delivered ballots via mail; about 5,500 ballots where municipal clerks allegedly improperly added witness information; and about 17,000 ballots collected at “Democracy in the Park” events sponsored by the city of Madison in late September and early October.

“I do think if you’re going to make a claim like that, you better have your evidence and you better have the law on your side and make your case. And at least in the cases before us, that wasn’t the case,” Hagedorn told The NY Times. 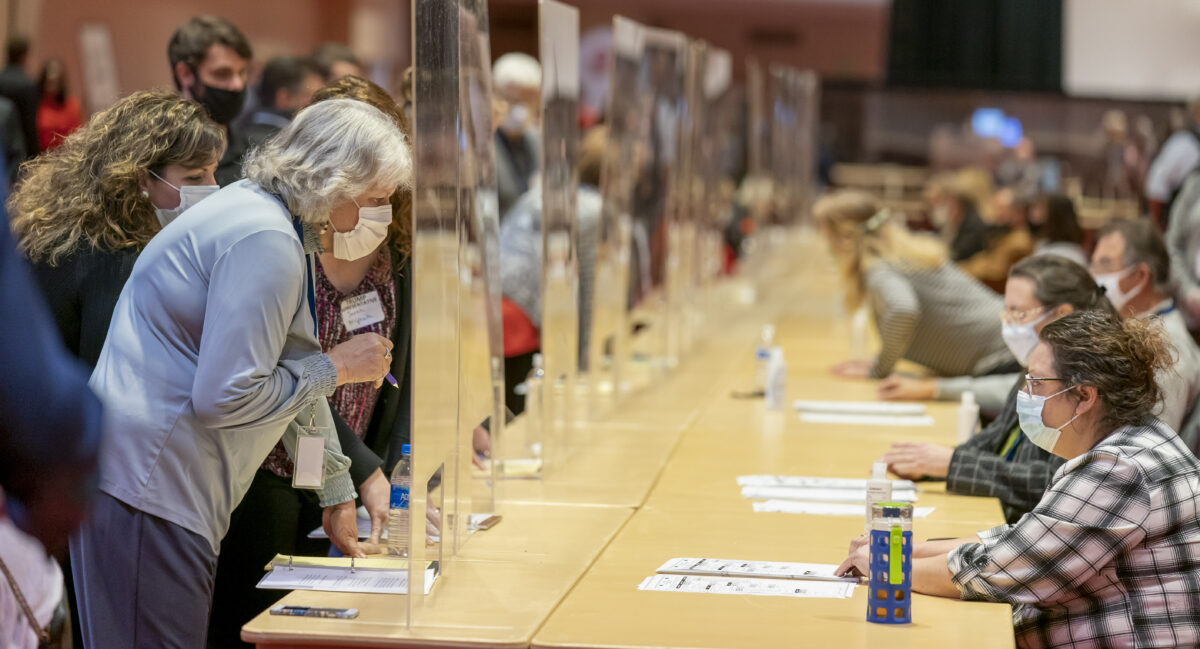 Representatives for President Donald Trump, looks over a ballots during the presidential recount vote for Dane County in Madison, Wisc. on Nov. 20, 2020. (Andy Manis/Getty Images)

“The [Trump] Campaign is challenging the rulebook adopted before the season began,” the Wisconsin Supreme Court’s majority opinion reads (pdf). “Election claims of this type must be brought expeditiously. The Campaign waited until after the election to raise selective challenges that could have been raised long before the election.”

The remaining three conservative justices dissented, saying that they believed some practices in this year’s election were illegal.

“The majority does not bother addressing what the boards of canvassers did or should have done, and instead, four members of this court throw the cloak of laches over numerous problems that will be repeated again and again, until this court has the courage to correct them,” Roggensack wrote.

Asked why his conservative colleagues on the Wisconsin Supreme Court saw the case differently, Hagedorn replied: “I can’t speak for them on those issues. To me there was a pretty clear application of well-settled law and that’s how I moved forward in deciding those issues.”

Hagedorn said he’s received sharp criticism for his decision to toss the suit.

In dozens of lawsuits in key battleground states and before the U.S. Supreme Court that have so far mostly failed, Trump has asked courts to reject ballots cast under questionable circumstances, including under alleged violations of state election laws and other improprieties like Republican poll watchers being denied “meaningful access.”

In a blow to Trump’s legal efforts, the Supreme Court last week declined to take up two of his cases challenging the election process in key states. Some 120 House Republicans signed on to that failed effort.

Trump expressed dissatisfaction with the Supreme Court, with the president calling the court’s decision to dismiss a Texas lawsuit against four battleground states a “disgraceful miscarriage of justice.”

In an order, the justices denied Texas’s request to sue the four battleground states, opining that the Lone Star State lacked legal standing—or capability—to sue under the Constitution because it has not shown a valid interest to intervene in how other states handle their elections.

“Texas has not demonstrated a judicially cognizable interest in the manner in which another State conducts its elections,” the order (pdf) read. “All other pending motions are dismissed as moot.”

Justices Clarence Thomas and Samuel Alito wrote a dissenting statement expressing the view that the Supreme Court is obligated to hear interstate disputes.

Trump’s campaign said on Sunday it would again ask the U.S. Supreme Court to reverse three rulings by a Pennsylvania state court interpreting the state’s rules for mail-in ballots.

GQ Pan contributed to this report.

21 Dec 2020
Wisconsin
Trump: ‘Big News Coming out of Pennsylvania’ About Drop Boxes
Flights From Africa, Brazil & China Continue to Land at Heathrow Even as Londoners Are Banned From Travel