(Headline USA) The Wisconsin Supreme Court struck down Democrat Gov. Tony Evers‘s statewide mask mandate on Wednesday, stripping the governor of one of his last remaining tools to attempt to curb the spread of the coronavirus.

It found that Evers needed legislative approval to issue more orders after the expiration of the initial 60-day mandate he issued in August.

“The question in this case is not whether the governor acted wisely; it is whether he acted lawfully. We conclude he did not,” Justice Brian Hagedorn wrote for the majority.

The decision marks another legal defeat for Evers. The state Supreme Court in May struck down his stay-at-home order, finding that his health secretary lacked the authority to issue such an order. A state appeals court blocked Evers’s attempts to limit capacity in bars, restaurants and other indoor places in October.

Local mask mandates remain in place. The left-leaning jurisdictions of Milwaukee and Dane County, which is home to the state capital of Madison, both have issued such mandates.

Evers said in a statement that he’s trying to keep Wisconsin residents safe and that he used science to guide his decisions, despite conflicting evidence on the effectiveness of mask use. He promised to keep working to get people vaccinated and urged people to continue to wear masks.

Justice Ann Walsh Bradley, a member of the court’s three-justice minority, lamented in a dissenting opinion that the ruling hampers the ability of Wisconsin governors to protect lives.

“This is no run-of-the-mill case,” she wrote. “We are in the midst of a worldwide pandemic that so far has claimed the lives of over a half million people in this country. And with the stakes so high, the majority not only arrives at erroneous conclusions, but it also obscures the consequence of its decision. Unfortunately, the ultimate consequence of the majority’s decision is that it places yet another roadblock to an effective governmental response to COVID-19.”

Republican lawmakers applauded the ruling. Senate Majority Leader Devin LeMahieu said Evers abused his power and that the court’s decision affirms the separation of powers between the legislative and executive branches. Assembly Speaker Robin Vos said people and businesses should be free to make their own decisions about what’s best for them “and don’t need state government telling them how to live their lives.”

Evers argued that he could issue multiple health emergencies because of the changing nature of the pandemic. The mask order first took effect in August and Evers extended it four times since then, most recently on Feb. 4 immediately after Republican legislators repealed it.

Hagedorn joined with the liberal justices in supporting Evers’s stay-at-home order in May, when conservatives held a 5-2 majority. His stance then gave Democrats hope that he would cast the deciding vote to uphold the mask mandate.

But during oral arguments in the mask case on Nov. 16, Hagedorn questioned Evers’s authority to renew health emergencies beyond the 60-day limit. He said it was an “extraordinary grant of short-term power to the governor” and that “it seems like the Legislature wanted to allow for only a very short period of time.”

The case challenging the mask mandate was brought by Jere Fabick, who gave more than $350,000 to Republican or otherwise conservative candidates in Wisconsin between 1994 and the middle of 2020, according to the Wisconsin Democracy Campaign.

In 2016, Fabick gave $20,000 to conservative Wisconsin Supreme Court Justice Rebecca Bradley. Fabick is a board member and policy advisor for The Heartland Institute, a free-market think tank, and also the president of a multi-state Caterpillar equipment and engine dealer. 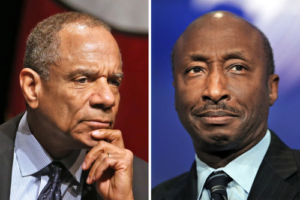